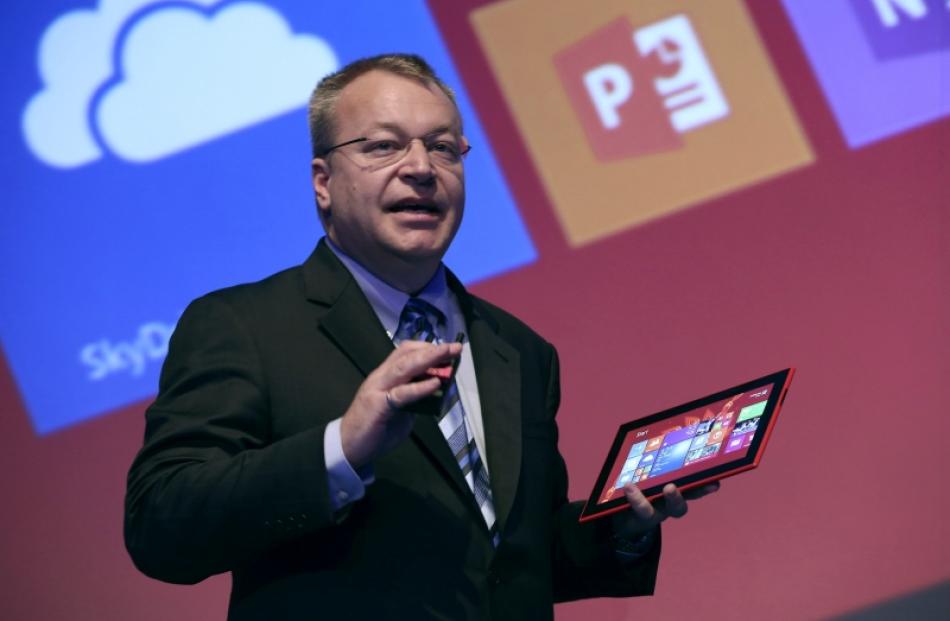 Nokia's former chief executive and the company's head of devices, Stephen Elop, displays the Lumia 2520 tablet during the launch of Nokia's first tablet and two large-screen smartphones in Abu Dhabi. Photo by Reuters

The world of tablets and phablets is about to get a lot more colorful.

Nokia, whose Lumia line of vibrantly colored Windows Phones have stood out among the largely black-and-white world of smartphones, has announced that it is coming out with its first Lumia tablet - the 2520 - and two 6-inch Windows Phone devices, the Lumia 1520 and 1320.

The new tablet is notable because it's one of the few devices (along with the Microsoft Surface 2) running Windows RT 8.1, the Windows version designed to run on devices using battery-saving ARM processors.

Windows RT tablets - including Surface RT, the predecessor to Surface 2 - have not sold well.

The new smartphones mark Nokia's entry into the "phablet" market - so called because the devices' screens, generally 5 to 7 inches on the diameter, fall between those of smartphones and tablets.

Both Microsoft and Nokia are counting on the new devices to help boost their share in the worldwide smartphone and tablet markets.

The two companies entered into a smartphone partnership in February 2011, and Microsoft in September announced plans to acquire Nokia's phone business.

Currently, Microsoft's shares of the smartphone and tablet markets hover in the 3 to 4 percent range worldwide.

The new devices are among several announcements Nokia made.

Notable among those announcements is the news that Instagram is finally coming to Windows Phone in coming weeks. That would add big-name lustre to the Windows Phone Store, which has passed the 175,000 applications mark. (That number, however, still lags far behind the number of available for iPhones and Android phones.)

Stephen Elop, Nokia's executive vice president of devices and services, said in a statement that Lumia devices have enjoyed quarter-on-quarter volume growth in the third quarter and invited people to make the switch to Nokia.

Elop will be returning to Microsoft to head its hardware division after the acquisition is completed.

Among the devices Nokia unveiled:

- The Lumia 2520 is a 10.1-inch tablet with a 1080p HD display, 6.7 megapixel camera, and connectivity via Wi-Fi and 4G LTE. It runs on a 2.2 GHz quad-core Qualcomm Snapdragon 800 processor, has 2 gigabytes of RAM, 32 GB of internal memory and micro SD card support, and comes with SkyDrive cloud storage.
It will be available in a glossy red or white finish, or a matte cyan or black finish. It is expected to start shipping sometime in the fourth quarter, and will retail for an estimated $499 before taxes or subsidies.
The tablet will come with some apps unique to the Lumia, such as "Dragons Adventure," an interactive game developed with DreamWorks Animation that incorporates landmarks, traffic and weather conditions during family drives into the game; and Nokia Storyteller, which combines the user's photos and videos with mapping technology to create a chronological picture journey on a map.
Nokia is also offering a Power Keyboard for $149 that wraps around the 2520 and offers up to five extra hours of battery life and two USB ports.

- The Lumia 1520 boasts a 1080p HD display, 20 megapixel camera, Qualcomm Snapdragon 800 2.2 GHz quad-core processor, 2 GB RAM with 32 GB internal user memory (and additional 7 GB SkyDrive personal cloud storage and micro SD card support), and built-in wireless charging.
It will come in yellow, white, black and glossy red and sell for an estimated $749 before taxes and subsidies. Carriers typically offer subsidies to reduce the initial price of the phone when buyers agree to a two-year service contract.
The lower-priced and less powerfully featured Lumia 1320 - which has a 720p display - won't be available in the U.S. in the fourth quarter. Rather, it is expected to start shipping in the first quarter of 2014 to China, Vietnam, India, other Asian markets and Europe. It will come in orange, yellow, white and black and sell for about $339 before taxes and subsidies.

- Nokia is also introducing the Asha 500, Asha 502 and Asha 503, part of Nokia's line of lower-cost smartphones designed for emerging markets. Nokia plans to start shipping those models in the fourth quarter. They will not be available in the U.S.