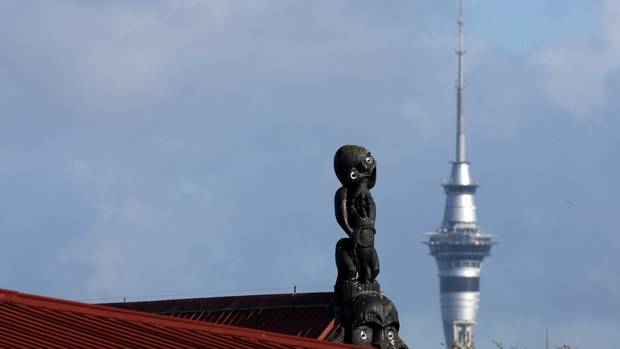 Ngāti Whātua Ōrākei is vowing to use only Aotearoa from now on. Photo: Dean Purcell
Two of the country's biggest companies will use Aotearoa in their names rather than New Zealand.

The pair's move follows a push by Tāmaki Makaurau hapū Ngāti Whātua Ōrākei to have Aotearoa as this whenua's official name.

With Mahuru Māori coming to an end - where people are encouraged to speak te reo through September - Ngāti Whātua Ōrākei wants to keep momentum rolling, and is vowing to use only Aotearoa from now on.

It is a challenge to others to embrace this oha, or gift, and already Vodafone and communications firm DDB Group have signed on.

Users of the mobile network might have already noticed the network name changed on their phone screens recently from "VF New Zealand" to "VF Aotearoa", which is part of the oha.

Some users threatened to change networks if it was not changed back to the English term.

Vodafone responded it had no plans to do so, and 2degrees and Spark also piped in with its support for the country's indigenous language.

The hapū's Aotearoa Oha initiative launches today, and encourages businesses and individuals to incorporate reo and tikanga in tangible ways in their lives and business.

Participants can take part in whatever ways they can - whether these are cities, businesses, schools, groups or individuals - and lodge their commitments on an official Oha webpage.

The initiative comes as political discussion around the name Aotearoa/New Zealand ramps up, with one of the Māori Party policies to return the Māori name by 2026.

Deputy Prime Minister Winston Peters shut the idea down as "headline-hunting", meanwhile Prime Minister Jacinda Ardern declined to say if she supported a change, but said she noticed it being used more commonly.

"We do not need legislation, a week or a month to embrace te reo Māori and we know many others feel the same.

"Te reo Māori is the gateway to our culture and we have seen, heard and felt the overwhelming response to Mahuru Māori from the people, Māori and Pākehā, across Aotearoa who are ready for more."

The oha also comes in a year where major questions are being raised around colonial placenames and statues.

In Hamilton, Waikato-Tainui successfully called on Hamilton Council to remove a statue of the city's namesake, who was involved in historic battles against mana whenua, and renewed its call to have Kirikiriroa restored as the city's name.

In Te Wai Pounamu/the South Island, Ngāi Tahu has also been involved in discussions around renaming the largest city Ōtautahi.

"We love seeing what is happening all across the motu," Royal said.

"Me personally, I just love Aotearoa as it is what we have always called it, it describes our home.

"It is also unique, we are the only place that speaks te reo Māori, and is a gateway to our culture."

Vodafone Head of Māori Development Kirstin Te Wao said joining the oha would be part of their five-year plan.

"We want to be a partner for Māori, and this oha is a welcome challenge for our goals and values."

The company would gradually incorporate Aotearoa through its internal and external communications, along with uplifting te reo in general and supporting staff in te reo courses.

The move also continues other progressive initiatives for the company, which is half Aotearoa-owned, including its policy "Honouring the principles of Te Tiriti o Waitangi", launched during Matariki in July.

"We encourage all businesses to support this powerful step forward, where biculturalism is not only acknowledged but celebrated."

While some customers were not so supportive, Te Wao said they hoped this would change in time "as more New Zealanders embrace te reo".

"We're proud to be part of the community here in Aotearoa and we're fortunate to use our voice and platforms to positively support the Māori culture and language."

DDB Group New Zealand would from now on refer to itself internally and externally as DDB Group Aotearoa.

This applied across its group of agencies TRACK Aotearoa, Mango Aotearoa and Tribal Aotearoa.

CEO Justin Mowday said the agency is on a journey and this gesture was an important step.

"When we moved into our new DDB whare early last year, Ngāti Whātua Ōrākei kaumatua honoured us by blessing the building and giving us a real sense of context and grounding on this whenua.

"It was a good reset for us and galvanised our resolve to not just be passengers on the journey to creating an Aotearoa more embracing of te ao Māori – we want to be actively involved in making it a reality, sooner."

Royal said the oha carried on a proud tradition started when ancestor Te Kawau gifted 3000 acres in 1840 which went on to form the city of Tāmaki Makaurau.

"This is our oha to continue on our haerenga (journey) of fully embracing te reo Māori.

"We have set some big goals within our hapū and we are calling out to the rest of Aotearoa to join us, to use the gift of te reo Māori, and be generous with it to spread it near and far.

"It's simple, we are Aotearoa."