'We feel cheated': Buyers speak out as developers back out 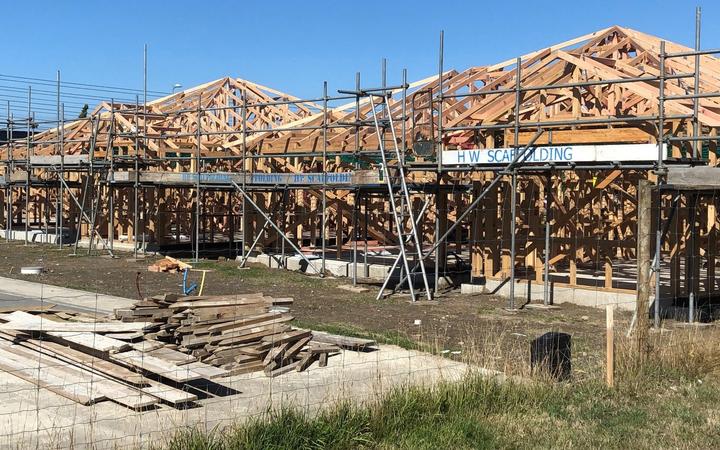 Lawyers say sunset clauses to cancel contracts with house buyers are being invoked more. (File image) Photo: RNZ
People desperately trying to get on the property ladder say they are being taken advantage of through the sunset clause.

Lawyers say sunset clauses to cancel contracts are being invoked more, and buyers talk of having land deals cancelled or being called on to stump up extra "contributions" to keep a project on track.

This comes as the escalating price of land and cost of building materials amid supply change crises, makes deals inked months ago less viable or attractive for vendors.

They each face having to re-enter a housing market where prices are up 24 percent for the year nationally, and over 30 percent in some spots

'The developers get away with this'

Manu* believes their "delay" was deliberate - that the developer never intended to sell to them.

Sunset clauses are common in off-the-plan deals; they are meant to primarily protect buyers so they can pull out at a certain date, if a project is delayed.

"We could feel that they were trying to delay it because with the house prices going up, it would be so beneficial for them to cancel our contract," he told RNZ.

Eventually, two months ago, just days before the couple had a new baby and one day after the house's certificate of Code of Compliance (CCC) was issued, they learned the sunset clause had been invoked.

The Covid-19 period was a risky time to buy, for them and the vendor, he said.

"We wouldn't have been too upset," he said.

"We did sign the contract. But then they wasted our time - three months later [from the July 2021 date], just to enact the sunset clause at the very last minute."

They had tried to find a deal with a sunset clause that benefited only the buyer, but no developer would agree.

They do not want to put resources into a legal fight, when what they need is a home, which they guess will now cost at least another $100,000.

"The developers get away with this - all the reward, and no bad reputation.

"Hopefully there will be regulations in the future that protect the buyers more."

Advik* bought a turnkey property in Papakura in February, for $630,000. In June they were invited to choose carpeting.

"Everything was on track," he told RNZ.

But then lockdown hit, and a shock; the vendor cancelled - and came back asking for another $100,000.

"We tried to get finance sorted," he said, but the new price put a first-home grant out of reach.

They did not trust the new completion date of October and were also nervous when the developer refused to remove the sunset clause.

"Within days they put again that house to market and sold to someone else at a higher price."

From looking online, Advik believes the developer cancelled four similar deals, and relisted each at $780,000.

"Now we are out of market and can't buy in Auckland."

He believed the deal was always rigged. "It's not fair, really not fair. We feel cheated."

First-home buyer Abigail* bought a house and land package in November 2020 in Christchurch, expecting to get title by June this year.

The advertising for their development was typical: A shot of a young couple sitting with a happy baby on new carpet, and a listing of the short distances to schools, parks and the local library.

Her sunset clause was not until June 2022.

But the landowner gave notice a few weeks ago they would cancel multiple stages in anticipation of not being built on time.

Abigail has driven by and can see the main road and utilities are in.

"So it seems very suspicious that now they are saying they cannot deliver on what is left to do," she said.

"It screams pure greed. They're taking advantage of land prices going through the roof."

She is asking lawyers to check if the cancellation can be stopped.

"It's not looking likely. We certainly have done everything we were supposed to do, and to be mistreated in this way is devastating.

"It's bad enough that it's happening, what they're doing, but what it's also done is it's outpriced us from the market."

They are reconciled to that - "the rising costs... and Covid obviously having an effect, we've given [the developer] that bit of grace".

However, there are a half-dozen other variations on a build that has yet to begin.

The delivery date of next April has now slipped by a year; a clause promising payments for delays to clients has been dropped; and a sunset clause has just been extended to mid-2023.

"We're just in that rock and a hard place of just being at his mercy basically, with all the changes that he keeps making that seem to favour him and not us," Peter said.

His contract prevents the vendor cancelling, then selling the house for more - though that too is now up for debate.

Though they are locked in a "holding pattern", even if they could themselves cancel, they fear calling it quits.

"It would leave us back to square one.

"We'll be paying $950,000, a million, probably for the same place because prices have just skyrocketed.

"If he drags it on much further... it will completely ruin our opportunity."

* Names of buyers have been changed.