Weldon: building something of an empire 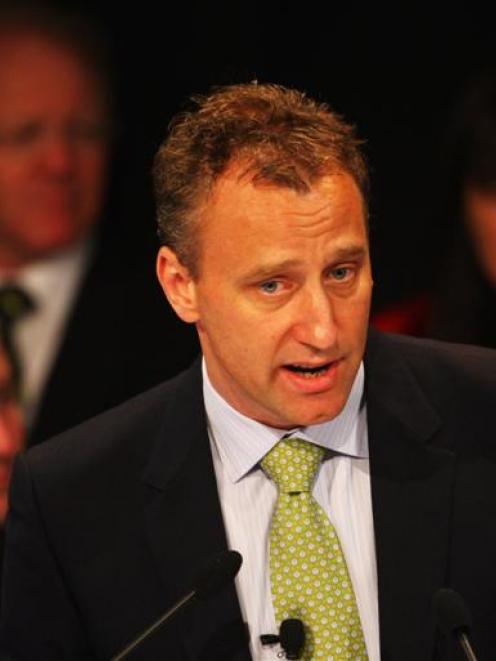 Formerly a "number eight wire order-matching exchange" with a reputation for lax regulation and ripe for takeover by the ASX, under Mr Weldon's rule NZX has cleaned up its act.

It has increased the amount of revenue it extracts from its operation of the market while widely expanding the range of its business interests.

The list of NZX's diversifications is impressive. The Smartshares funds management operation, a domestic equities registry, its acquisition and subsequent sale of a stake in the Bond Exchange of South Africa, its bid to set up a low-cost equities trading platform to compete with the ASX in Australia, the establishment and sale of a registry for tradeable carbon credits, its acquisition of electricity spot market operator M-Co and, most recently, its bid to take control of second-tier Australian market operator NSX.

At the same time, Mr Weldon has developed a prominent national presence, not least of all through his efforts to stimulate discussion around a number of pressing issues including the recession and the resulting loss of jobs.

There has barely been a government working group set up to examine key economic issues to which Prime Minister John Key has not appointed Mr Weldon.

But in expanding his and his company's sphere of influence and activities, Mr Weldon and NZX have put more than a few noses out of joint.

Some brokers are upset with fee increases, and the exchange's "aggressive and dictatorial" treatment of them.

At the same time, other market watchers have become unhappy the company's increasing range of business activities are creating what they see as potential conflicts of interest with its role as market operator.

Another gripe is NZX's stated strategy to increase the amount of revenue it gathers from selling the information generated by its market operations.

But perhaps the biggest problem with NZX many see, is its role as both the market operator and its frontline regulator.

NZX's acquisition of rural media business Country-Wide Publications has brought these issues to a head.

Initially, the purchase threw up issues around editorial independence. NZX has made no secret of its wish to have more of the country's crucial agricultural sector represented on its capital markets.

It is clear that many regard the Country-Wide acquisition as part of a cunning NZX plan to persuade the dairy farmer shareholders in Fonterra - the ultimate prize for NZX - that some kind of capital restructuring, such as a partial sharemarket listing, is in their interests.

Mr Weldon's response, to cast aspersions on the mental health of those who even suggest such a thing, has served to highlight what many see as something of a weakness - a thin skin, which can lead to ill-judged reaction.

Case in point: When journalist Colin Peacock on National Radio's Mediawatch last Sunday asked whether assurances of continued editorial independence had been sought or given to editorial staff at Country-Wide publications Farmer's Weekly and Dairy Exporter.

Mr Weldon's response, that he was going to write all the articles himself, may have been an attempt at levity, but came across as petulant.

A number of market players told the Business Herald they have found Mr Weldon somewhat arrogant although that impression, some said, was tempered on getting to know him better. One simply said Mr Weldon is "not user friendly".

Then again, virtually all those who had little favourable to say about his demeanour were plainly impressed by his abilities as a far-sighted, innovative businessman.

One source in the local investment banking industry, who regards the New Zealand sharemarket as something of a "dead-end business", professes his "grudging respect" for the way Mr Weldon has "turned what seemed to be a sunset business into a broader information seller.

He has worked the monopoly, put up fees etc, but he has shown that he is able to take the exchange in some new and interesting directions and somewhat successfully."

Mr Weldon was appointed shortly after a group of business leaders, including Lloyd Morrison, fended off a low-ball takeover bid by the Australian Stock Exchange which would have cemented New Zealand's lamentable status as a branch economy.

Since then, the company, which chairman Andrew Harmos says was "a number eight wire order-matching exchange" has come a long way.

Mr Harmos says ASX's offer was worth $12 million. Today, the company has a market cap of more than 10 times that, having also paid substantial dividends and paid capital returns. "And that's attributable to the strategy Mark has identified."

Looking at NZX initiatives such as the carbon registry and even the as-yet fruitless AXE ECN venture, it is hard to argue with Mr Harmos' assertion that Mr Weldon is "ahead of the curve" as far as identifying business opportunities.

This would be all very well, says Guinness Peat Group's New Zealand head Tony Gibbs, if NZX was not the frontline market regulator.

"Were NZX not the market regulator, but merely the facilitator of shares being bought and sold, he could do what he, his board and his shareholders like," says Mr Gibbs.

"But mixing the regulator up with these other enterprises is wrong. I don't believe the NZX should be a regulator at all. Regulation should fall on the Securities Commission."

Securities lawyer Stephen Franks does not see any big problem with the sharemarket operator and regulator owning Country-Wide or, indeed, any media.

Like Mr Weldon and others including Mr Harmos, Mr Franks believes NZX will shoot itself in the foot if it tries to dictate editorial direction, as such an attempt would be easily detected by readers and would damage the publications' brands.

However, he sees the market operator/regulator issue as a live one, specifically concerning the continuous disclosure regime and NZX's information sales activities.

"The continuous disclosure system was intended to ensure everyone in the market got information at the same time, but they've found it has now created value as well."

It is hard to see the 20-minute delay NZX has in releasing company announcements free on its website as anything other than a means to make money from the sale of real-time information.

Another problem seen with NZX's regulation of the market is its ability to impose fines. The investment banking source who respects Mr Weldon as a businessman points out:

"With disciplinary actions, you get these slightly bizarre situations where a company's directors really stuff up, it costs the shareholders money and then the NZX fines those same shareholders and they pocket the money. How can you sit there as Weldon or someone who's taking a dividend cheque out of the NZX, and decide what you're going to fine a company? It's an absolute conflict."

But the money NZX's disciplinary arm raises through fines, just under $250,000 last year, is set aside for "investor education", once costs are deducted. NZX head of markets Geoff Brown was yesterday unable to name any investor education projects the money had funded.

Nevertheless, says Mr Harmos, the money is not going to NZX's bottom line. He refers to the concerns about NZX's operator/regulator status as "the old chestnut that comes up" and points out NZX is not the only exchange that has that model - naming Johannesburg and Singapore off the top of his head.

"It would pretty rapidly destroy the credibility of the regulatory function which is core to attracting depth and confidence to the market, without which, it's worth nothing."

Mr Harmos points out the New Zealand market used to have a reputation for poor regulation but much work has been done to remedy that including strengthening government regulatory agencies the Securities Commission and Takeovers Panel.

Over the same time, NZX, in the continued review of its listing and participant rules, has taken "a much more proactive role in its regulatory role and function to the point it guards that performance incredibly jealously".

"We cannot have a lack of confidence in regulation."

He says most of the criticism of NZX's role as a regulator has been "more theoretical and potentially perception-based rather than actually delivery and performance-based".

While there has been some talk that the Securities Commission may at some point in the future become the sole sharemarket regulator, Mr Harmos says he is not aware of that.