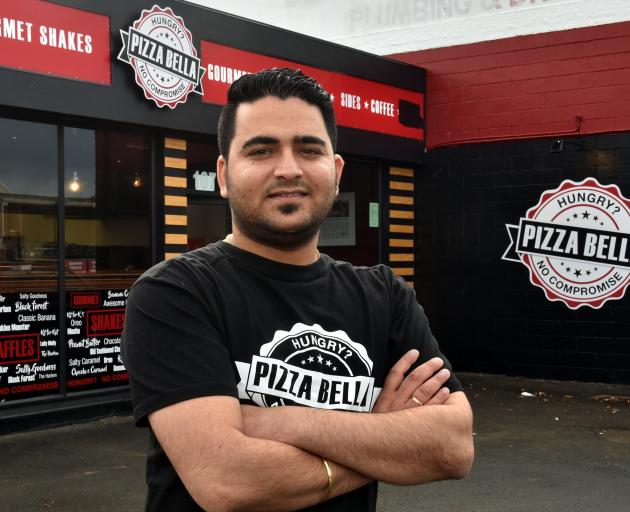 Mr Arora (25) now oversees three Pizza Bella stores outside his own work hours as he works in the head office of Night ‘n Day Foodstore Ltd in Dunedin as operations assistant manager.

Pizza Bella was born last year when he opened in George St, after buying a failed pizza business having spied a potential business opportunity.

He later bought another pizza shop in Alexandra, rebranding it also as Pizza Bella, and recently opened in Gordon Rd, Mosgiel.

Mr Arora only spoke limited English when he arrived in New Zealand from India as a teenager to study business management.

Now happily settled in Dunedin, he has adopted a new slogan for Pizza Bella — Born in Otago — a reflection of how Otago people had supported him, he said.

The latest opportunity arose several months ago when he approached the owners of an existing pizza shop in Mosgiel and asked what their plans were.

He had earmarked Mosgiel as an ideal location for Pizza Bella for some time and the Gordon Rd site was a "beautiful location", he said.

A week later, they phoned and asked to catch up and, after discussing the move with his family and also the Night ’n Day team, whom he also considered as family, the deal was sealed.

When Mr Arora rang his builders and asked what they were up to the following week, he already had figured out exactly how the rebranded store would look.

It was only a matter of weeks before the building work was done, with the builders working as late as midnight, helped out by Mr Arora.

It was a much bigger store than his other shops and was able to seat up to 30 people.

Since opening, there had been a "huge" amount of support and it would soon be opening early in the morning as a cafe.

It was the tremendous support that Pizza Bella had received since first opening in Dunedin that had led to the business expansion and there were more plans in the future.

"We are all working on it at the moment, working on how we can expand. People are loving it. We’ve got a good concept, good quality, the manpower to do it and the brains to do it . . . and we are into it," he said.

He was grateful for the support from his family, Night ’n Day and the community, saying it was a collaborative effort.

"People will stand with you if they know you’ll make a change . . . and you’re doing something good," he said.

His family were present for the Mosgiel store’s opening and he admitted there were some happy tears shed, when they saw what he had been doing.

Mr Arora acknowledged it had been a difficult and stressful time recently, sometimes finishing at Pizza Bella at 2am or 3am and then being at the Night ’n Day office at 7.30am.

At the moment, he was heading to Mosgiel after finishing  at Night ’n Day and staying until closing at 8.30pm, and then heading into the city to help with closing.

He was usually home between midnight and 1am.

He employed between 18 and 20 staff and  still needed  at least five to 10 more.

He had a great team around him, he said.

There were often queries as to where the Pizza Bella brand came from, with Australia and the United States sometimes suggested.

And as word spread about the business, he was fielding increasing inquiries about getting it in other towns.

While very keen on that, he needed to make sure that he had systems and processes "absolutely right".

There would be some "big changes coming up" and definitely more shops, with the same brand and layout.

People were requesting a delivery service and that was going to be a "game changer".

He hoped to eventually get into selling franchises and he would push for existing managers to move into the roles of franchisees, saying he would be "more than happy" to help them into that.