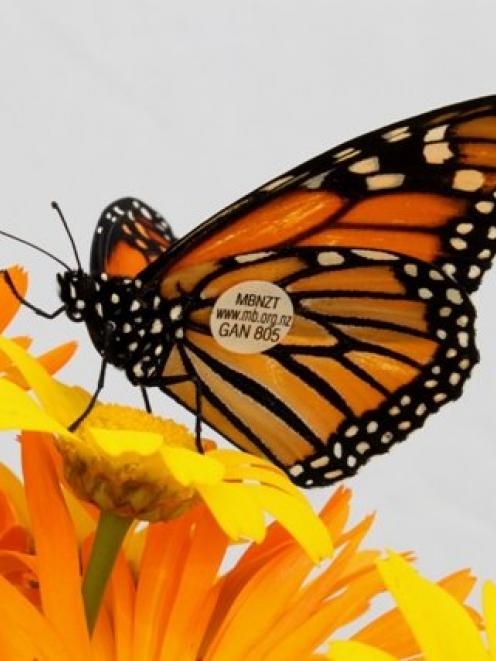 Millions of monarchs migrate to Mexico for the winter. Photo: supplied
Children have flooded an Auckland environmentalist's mailbox with droves of paper monarch butterflies for an art installation marking the Moths and Butterflies Trust of New Zealand's 10th anniversary.

The artwork would be a installed at the gala premiere of the movie Flight of the Butterflies, at Hoyts Sylvia Park on Monday. The film followed the year-long annual migration cycle of the butterflies and showed millions of monarchs in their overwintering sanctuaries in Mexico.

Trust secretary Jacqui Knight said thousands of children had sent in paper butterflies in all shapes and forms for the artwork.

"Mostly brightly orange coloured, but in all sorts of media, some with glitter on their wings."

Others had joined her in a working bee at her home to help piece together the more than 2000 butterflies into a overwintering colony.

The art installation and 3D movie screening would mark the 10-year anniversary of the trust, which was first established to ensure that a development planned in Butterfly Bay, in the Far North, did not endanger one of the monarch butterfly overwintering habitats.

Since then the it has worked on educational initiatives, particularly with schools and gardeners, to increase awareness of New Zealand's moths and butterflies.

Ms Knight hoped the funds raised from the gala screening would be enough to subsidise later screenings of the film for the children to go to and learn more about butterflies.

"We'll also be helping children become more aware of the wonders of nature."

She said it was important to raise awareness as some of these butterflies and moths were on the serious decline list, but were not afforded the same attention as other endangered species because they were "just insects".

"Some of these at-risk species are only found in this country," she said. "They add to this country's rich biodiversity."

Ms Knight said the forest ringlet butterfly, once commonly found in forest reserves around Auckland and Wellington, was one example of an at-risk species.

She said it has become endangered as a result of the loss of its food plant and introduced pests that fed on their larvae.

Another example Ms Knight cited was that of the New Zealand Red admiral, or Kahukura, which has almost disappeared from Auckland because of the loss of its host plant.