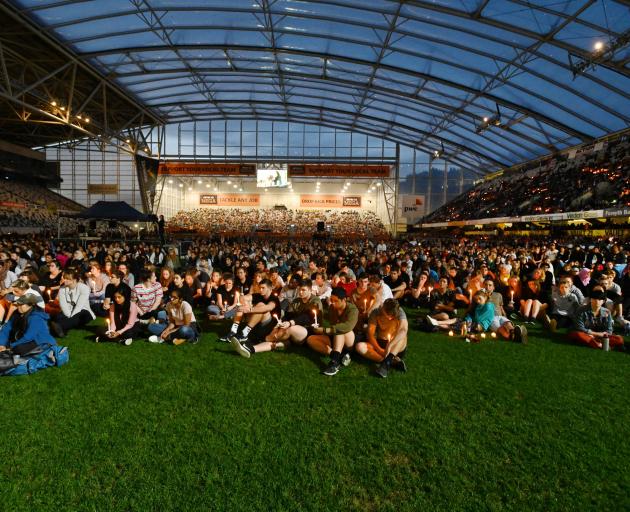 Along with some Christian friends, my wife and I attended the vigil at the Dunedin stadium following the mass murder of Muslims on March 15. It was a moving experience, walking with the crowds to the venue and seeing the people continue to flood into the stadium after we were seated.

The atmosphere was unlike anything I had experienced in my life - a kind of intense gravity mixed with sorrow and a desire to express something beyond words, because words themselves seemed so inadequate. Lost for words, yet so many were spoken.

A pamphlet was handed to us explaining something about Islam and prayers were offered by different faith groups - seven in all. Answering their call to prayer, many Muslims made their way to a place set aside for that purpose and in full public view, repeatedly bowed low in accordance with their religion.

The fact they were able to do so, without fear of any opposition or worse, was a powerful expression of the right to religious freedom which we hold dear in this country.

Studying the pamphlet handed to us, I noted that it made ``truth statements'', i.e. propositions which were advanced as being truth from a Muslim perspective. The prayers offered by the other different faith groups did not explicitly assert truth statements, but such were implied nevertheless. The prayers were offered or directed to the respective deities of the group. That diversity of religious expression, again without opposition, also reinforced the freedom principle which the vigil so resolutely set out to assert.

Will it be possible to hold on to the ground of tolerance which the agony and shame of March 15 obliged us to embrace? That will largely depend on the way religious freedom is understood and applied. It means not just allowing people to practise their religions such as observing Ramadan and attending mosques. It also means allowing adherents to publish their beliefs, such as handing out the pamphlet and disseminating literature.

Before Easter, the Hope booklet ``Hope for All'' was delivered to most letterboxes in New Zealand. This was a co-operative venture involving different Christian churches.

Religious freedom means that the Jehovah's Witnesses can set up their stand in the Octagon with a couple standing nearby available to engage in dialogue with anyone who happens to stop. It also means that Mormons are allowed to proselytise through door knocking. The Hare Krishna followers can ring their bells and provide cheap food to Uni students, and so on. It means that ``truth statements'' can be made without fear of persecution and reprisals.

A Christian friend from Kathmandu was visiting recently and had coffee with other Christians in a local cafe. These locals happened to have their bibles with them on the table were they sat. Our Nepalese friend remarked that such a public display of bibles would not be permitted in her country.

There are many places in the world where there is no, or very little, religious freedom.

Based on the census data, I expect that many, if not most, of the people who attended the Dunedin vigil were not Muslim or Christian, either. Their presence was not in accordance with religious duty (having none themselves), but in visible support of the right of others to honour their duty. For many or most, I expect that was the first time they had seen Muslims and Tibetan monks at prayer.

There was no negative reaction to that activity. It follows that Christians should not be belittled for holding and expressing beliefs which are not in secular vogue.

I think religious freedom goes way beyond these expressions of tolerance. It means as Kiwis we should find out more about the religions about us so we understand them better.

It seems that ignorance and tolerance do not lie well together. It means that we should make an effort to learn about each other's beliefs. What makes up their doctrines and practices? What truth statements do they profess? Who and what do they believe?

The sustained attack on Bible in Schools by secularists is not a demonstration of religious tolerance and solidarity with those of different beliefs.

I haven't heard of Atheists in Schools. Why not allow different religious groups to explain their religions as part of general education? A pithy primer about religions is the BBC series Religions and Ethics, now no longer updated, but still a valuable resource.

Just as useful (and maybe more so) would be some education on what makes a cult and how to avoid them.

Our nation changed irrevocably on March 15. We are obliged to further deepen our resolve to be a tolerant society where differences are not feared or shunned, but celebrated.

It behoves us to apply ourselves to this noble task with more than mere sentimentality.

- Peter Sara is an elder at the Elim Church, Dunedin.

Bible in Schools is the least tolerant thing we can be doing in our public schools. It turns the classroom over to one type of believer to preach as though in church to our vulnerable children. This isn't inclusive, kind or tolerant. This is endorsement of a single faith - bullying and coercive. Families from minority faiths quietly try to blend in, or reluctantly have to self-select themselves to be outsiders to opt out in their community schools. Not automatically free from religious pressure even as 5 and 6 year olds, non-religious and liberal Christian families are faced with this too, while evangelical Christians take over.
This, of course, has nothing to do with education ABOUT religions (as well this Elim Church contributor should know, since they provide volunteers for Bible in Schools which is only allowed to happen if SCHOOLS TECHNICALLY CLOSE). Such religious education by teachers (not Bible in Schools volunteers) is acceptable to many secularists. Secularists are profoundly supportive of diversity and the right to freedom of and from religion. Let's show a little love rather than attack those who would protect diversity and tolerance.

This article is deceptive. It starts off talking about religious tolerance, which most of us would agree with. However, it then turns against secularists who are trying to remove the intolerant practice of Christian religious instruction in secular state primary schools, which promotes one religious view as the correct one. Education about religion would promote tolerance but Bible in Schools merely promotes Christian religious faith. This opinion piece should never have been published.