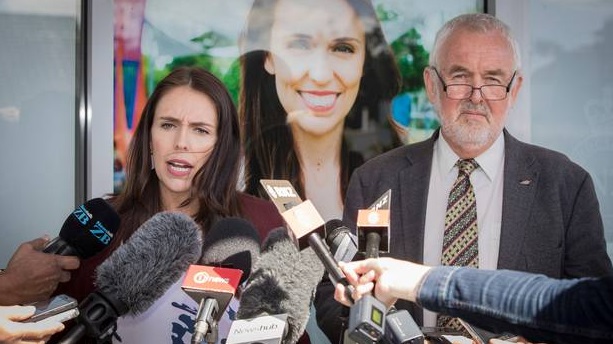 Prime Minister Jacinda Ardern is awaiting a QC's report into Labour Party president Nigel Haworth's (right) handling of complaints about a Labour staffer. Photo: NZ Herald
The 19-year-old who says she was sexually assaulted by a Labour staffer has called the party "cowardly" and released another email to support her claim that she did inform the party about the nature of her complaint.

The woman was responding to Labour Party president Nigel Haworth's comments yesterday that neither he nor the party's investigating panel were told that any of the complaints about the Labour staffer were about sexual assault.

Haworth's job is on the line over his handling of seven formal complaints about the staffer whom the party investigated earlier this year.

The party's investigating panel decided in July that no disciplinary action was needed, but Maria Dew QC is now reviewing the matter following complainants' concerns that allegations of sexual assault were ignored and that the process was botched and unfair.

Dew will report directly to Prime Minister Jacinda Ardern, who said she was "incredibly frustrated" with the contradictory claims and is awaiting Dew's report, due in four weeks, to provide clarity.

The woman alleges that the staffer attacked her in February 2018, and that she told Haworth about the attack in October 2018, and then told the investigating panel verbally and in documents attached to an email about the nature of the attack in March this year.

Following Haworth's denial yesterday of knowing anything about a sexual assault claim, the woman released another email to The Spinoff from June this year that she sent to the panel.

The email attachment contained a clear reference to the sexual assault, The Spinoff reported.

The woman has also claimed that she emailed Haworth in May and the panel in April about the alleged sexual assault.

The woman told The Spinoff that Haworth's insistence yesterday that Labour was not aware of the nature of her claim was "disappointing" and "cowardly".

"We've had so many email exchanges that talk about the nature of the investigation. I'm incredibly saddened ... Standing by a process you know is flawed, a process you know retraumatised and put further young women at risk is cowardly."

A male complainant has also told Radio NZ that he personally told Haworth and the panel about the woman's sexual assault allegation.

The woman has said that the staffer pinned her down and attacked her in a private residence.

The staffer's lawyer says that the claim is "without foundation".

The staffer agreed five weeks ago to work away from the Parliamentary precinct, though complainants have reportedly said they have seen him on the premises during that time.

Yesterday a complaint about the staffer was laid with Parliamentary Service, the staffer's employer, relating to the alleged sexual assault.

General manager Rafael Gonzalez-Montero said the complaint was not related to the staffer's employment with Parliamentary Service, "so we can't do anything at this stage".

Meanwhile, serial litigant Graham McCready planned to lay a complaint with the Police Commissioner today about the alleged sexual assault.

"I intend to name the president of the Labour Party as an alleged accessory after the fact by way of obstruction of justice for misleading the PM as to the nature of the alleged offences," McCready said.

• February 2018: A Labour staffer - employed by Parliamentary Service - allegedly sexually assaults a 19-year-old Labour volunteer at his house, according to The Spinoff.

• March 2018: Complaints emerge about Labour's handling of assault allegations at a Young Labour summer camp earlier in the year and the party launches a review.

• April 2018: Spurred by the review, the volunteer emails the lawyer leading a probe into the camp incident, Maria Berryman, alleging a "lower-level" 2017 incident involving the staffer but is told the review is looking in the camp issues first.

• October 2018: Following an email to Haworth in August, The Spinoff reports that the volunteer meets Nigel Haworth. She explains the sexual assault allegations, but Haworth disputes this.

• February 2019: Labour's NZ Council sets up an investigating panel to look into the complaints about the staffer from the volunteer and six other people.

• March 2019: The volunteer and the other complainants testify before the panel and, according to The Spinoff, the volunteer describes the alleged sexual assault verbally as well as in documents attached in an email to the panel. The panel members say they received no email attachments and heard no verbal testimony about a sexual assault.

• April 2019: The volunteer emails the panel asking for an update, writing in the email about "an accusation of sexual assault", according to The Spinoff.

• May 2019: Haworth tells the complainants that the investigation is almost complete, and the volunteer writes back repeating her claim of sexual assault, The Spinoff reports.

• June 2019: The volunteer emails the panel and includes her testimony about the alleged sexual assault as an attachment, The Spinoff reports.

• July 2019: The panel emails the complainants telling them no disciplinary action will be taken.

• July 12, 2019: An email is sent from a third party to journalists raising concern for the complainants.

• August 5: Reports emerge about allegations of "bullying, sexual harassment and sexual assault", and resignations from the party. Media are told the formal complaints do not involve sexual assaults.

• August 15: The party announces it will let the complainants appeal.

• September 4: The man facing allegations of sexual assault from the Young Labour summer camp accepts a deal and pleads guilty to assault.

• September 9: A graphic description of an alleged sexual assault by the volunteer is published in The Spinoff. Jacinda Ardern says she was repeatedly told by Labour that the complaints were not about sexual assault, and that a review by Maria Dew QC will clear up the contradictory claims.

• September 10: Ardern says that if the Dew review finds failing from Haworth, he will resign. Haworth doubles down, saying neither he nor the panel were told about any sexual assault claims.