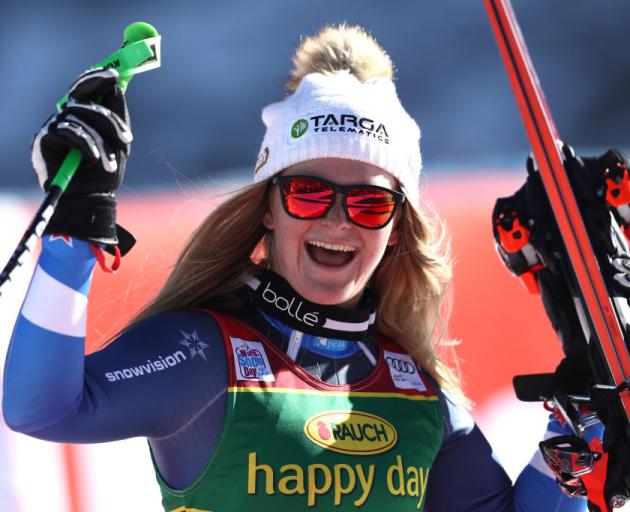 It was the first women's World Cup giant slalom victory for a skier from New Zealand, and the first in any discipline since Claudia Riegler triumphed in a slalom in Switzerland in 1997.

"It's going to take a while to sink in," 17-year-old Robinson said, adding she planned to fly back to New Zealand on Monday to finish her high school education this week.

It was the third points-scoring top-30 finish for Robinson, who won the junior world title in GS in February before finishing runner-up to Shiffrin in the World Cup Finals the following month. Saturday's result proved this achievement had been no fluke.

"I think I proved that wasn't a one-off so I am happy with that," said Robinson, who had been hoping to land her first victory soon. "I thought like, 'Oh, it could happen,' but it was not on my head. To win is pretty crazy."

Robinson, who trailed Shiffrin by 0.14 seconds after the opening run, was one-fifth of a second faster than the American in the final run. She won her first World Cup race in only her 11th start.

Tessa Worley of France, who won the race last year, was 0.36 behind in third.

"It's nice to start off quite well, but I just got to keep building and hopefully keep it up," said Robinson, who plans to start in her first World Cup speed event at a super-G in St. Moritz in December.

The academy was set up by Knight and a fellow former U.S ski team coach, Jeff Fergus, to help talented female skiers make the next step in their careers. 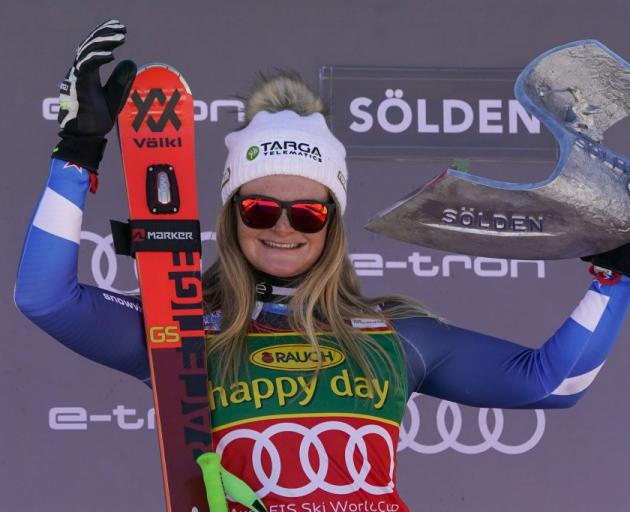 Knight worked with Vonn from 2015-18 after a six-year stint with another American standout, Julia Mancuso. Under his guidance, Vonn won 15 World Cup races and downhill bronze at the 2018 Pyeongchang Olympics.

Earlier, Fergus had also been Vonn's head coach, helping her to win 26 races in three seasons.

"He is a good coach," Robinson said about Knight. "He has a good attitude. He knows how to deal with athletes pretty well."

Watched by 14,000 spectators and racing under clear blue skies, Robinson positioned herself for a possible triumph when she became the only racer to stay close to Shiffrin in the opening run.

She lost only 0.14 seconds on the Olympic GS champion, while pre-race favourites like Federica Brignone, Tessa Worley or Viktoria Rebensburg were at least 0.86 off the lead.

WOW!!! Youngest winner in Sölden EVER goes to none other than Alice Robinson 💪🏻 Supported by the @LV_Foundation , with my former coaches Chris Knight, Jeff Fergus and on hill PR manager Enrica Knight they are the dream team!! So proud to help support them!! Also, congrats to pic.twitter.com/1nROiWvBRa

"I was a little bit nervous but I tried to keep myself calm, just trying to enjoy it all," Robinson said about her second run.

Shiffrin was full of praise for her rival, who, like herself in 2011, won her first World Cup race at age 17.

"You could see it last year that Alice is going to be really strong," Shiffrin said. "It's super cool and really exciting. She skied really solid so it's awesome."

Brignone, who was third after the opening run, finished 0.87 behind in fifth, ending up one place behind Norway's Mina Fuerst Holtmann, who had her best World Cup result.

The second run was interrupted for several minutes after Bernadette Schild badly crashed and was hospitalized by helicopter. The Austrian ski team said Schild tore the ACL in her right knee and will not compete again this season.

A men's giant slalom on the same course is scheduled for Sunday.