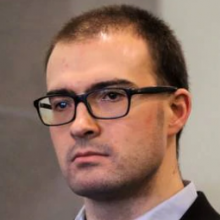 Martin Marinovich. Photo: NZ Herald / Sam Hurley
A West Auckland man who murdered his mother after years of caring for her will spend at least 14 years behind bars.

Martin Marinovich admitted he killed his mother Noeleen Ann Marinovich in their Oratia home on February 7 last year but denied it was murder.

A jury decided otherwise in a trial held earlier this year.

For murder, he was sentenced in the High Court at Auckland by Justice Tracey Walker to life imprisonment with a minimum non-parole period of 14 years.

Justice Walker described what unfolded as a frenzied attack over a sustained period involving strangulation and violent hammer blows to the head.

"She had been discharged from hospital just one day before ... she was dependent on you, she trusted you."

There was no reason for her to have felt a need to guard herself, she said.

"She was in all respects defenceless."

The defence case during the trial had been that he fatally strangled his mother in an instance of manslaughter and then he later hit her with the hammer.

But today Justice Walker said it was reasonable to conclude the jury believed the cause of death had been the hammer blows to her head, due to defensive wounds.

While it was a brutal attack on a vulnerable person there were several personal factors the judge considered when sentencing Marinovich.

He had no prior convictions, he had not planned the attack and was genuinely remorseful, Justice Walker said.

Also was only after his arrest that he was diagnosed with autistic spectrum disorder (ASD).

His thinking is rigid and linear without cognitive flexibility, the court heard.

Marinovich had been struggling to manage as a carer in the time leading up to the murder.

His mother was incontinent, suffered from angina and was unsteady on her feet - often collapsing.

He would take care of the shopping, pay the bills, help her in the bathroom and even dyed her hair which was a job she used to manage by herself.

Their home had become cluttered and he was socially isolated.

Earlier he had dropped out of university without telling anyone, a lie that became embedded in the fabric of his life.

"You were her world and I suspect you feared disappointing her," Justice Walker said.

Marinovich has had overwhelming feelings of remorse, particularly at night, since his mother's death, the court heard.

He had told the court he wished he could "turn back time".

Marinovich was at his local train station when he dialled 111 shortly after midnight on the morning of February 8.

He had already driven past the Henderson police station when he pulled over.

"I think I've killed my mother," he told the call-taker.

"I snapped and I hit her in the head with a hammer.

"I think I tried to strangle her and then I hit her in the head with a hammer."

He told the police officers who arrested him what he later told his jury - he could not remember how many times he hit her with the hammer.

He would later describe in court that he believed the injuries she had suffered were "totally incompatible with life".

A paramedic later arrived and confirmed the death.

There were 10 lacerations to her head, and her body was formally identified by dental records, the court heard during Marinovich's trial.

There should have been intervention to assist with cares and nursing visits.