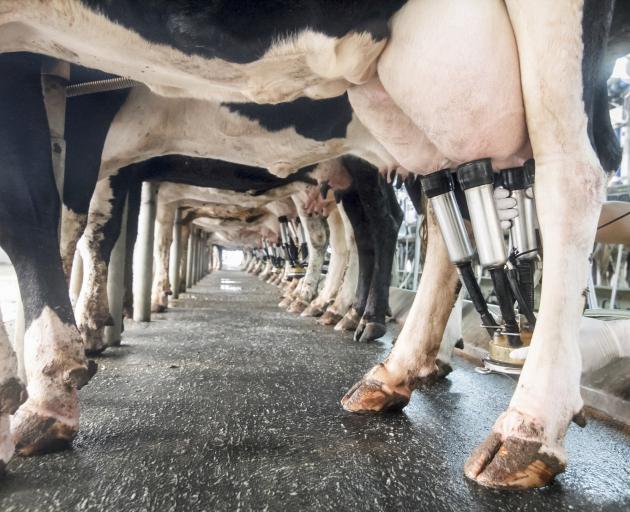 Yesterday, ANZ revised its forecast up 75c to $6.50/kg ms for the 2020-21 season while ASB increased its forecast by 25c to $6.75. That followed the latest GlobalDairyTrade auction, where the overall index fell 0.7% but whole milk powder prices increased by 0.6%.

Global dairy commodity prices had ‘‘defied expectations’’ recording strong gains in the past few months and the GDT price index had lifted 7.5% in the past three months, ANZ agricultural economist Susan Kilsby said.

Prices continued to perform strongly, putting returns in a much stronger position as new season milk started to flow, but it was expected that prices would ease later in the season, she said.

Deterioration in global economic conditions was the bank’s main concern. So far, dairy commodity markets had skirted around the market disruptions caused by Covid-19 but it feared, eventually, there would be downward pressure on prices as consumers took a more conservative approach to spending as economic pressures mounted.

ASB economists were encouraged by the prices at recent GDT events but were putting some of the strength down to buyers ‘‘adding some padding’’ to stocks as a risk management strategy, given the acceleration in global Covid-19 cases and increased potential for logistics disruption.

That behaviour was evidenced by the strength in near-term WMP prices which were significantly higher than the longer-dated prices at the last two GDT events. If that proved to be the case, then ASB also expected a price adjustment lower in the coming months.

Several key buyers stepped back their bidding activity, while North Asian demand rose 14%, accounting for more than 60% of activity. Other sizeable markets, such as Southeast Asian and the Middle East, were down 21% and 43% respectively.

Milkfat prices came under pressure and anhydrous milk fat and butter fell 2.8% and 4.9% respectively. Skim milk powder prices fell 0.5%, and cheddar prices increased by 0.6%. Lactose prices, which were at their highest levels since 2014, had been interesting, Mr Bailey said.

Demand from the infant formula and pharmaceutical industries (which together account for around 60% of lactose use) has picked up as companies secure volumes in the face of continued Covid-19 spread.

The price stability for WMP had been driven by strong North Asian, primarily Chinese, demand. China’s economy was recovering quickly, evidenced by the year-on-year Q2 GDP growth of 3.2%. However, there is still some concern regarding China’s domestic milk powder inventories.

Based on China’s National Bureau of Statistics 1H 2020 data implied milk supply growth in Q2 increased by around 10% year over year.

Given that exceptionally strong domestic milk supply growth, it appeared demand was stronger than expected, and manufacturers had struggled to substitute New Zealand WMP with domestic stocks due to differences in taste and colour profiles.

For now, demand in the global dairy market has proved resilient and further supported by government financial aid and buying programmes.

The price reflects the devaluation of the NZD v USD for most of the last 6 months, Just look at the price of imported goods- they seems to have gone up 10-20%. Good for the farmers exporting, not so good for rest of us.