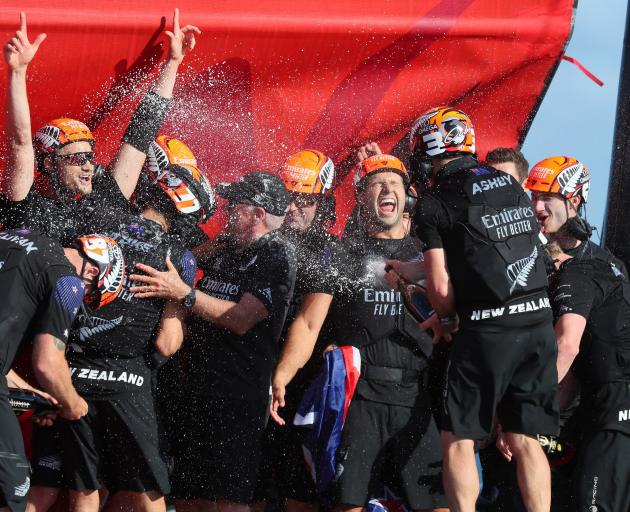 Team New Zealand celebrate winning the 36th America's Cup in Auckland. Photo: Reuters
The America’s Cup is still ... but you have probably heard that line a thousand times already.

Yes, the Auld Mug is to stay on these shores following Team New Zealand’s wonderful victory over challenger Luna Rossa in the inner Hauraki Gulf yesterday.

It wasn’t all smooth sailing but — to the huge relief of Kiwi sailing fans who remember (trigger warning!) the horrors of San Francisco, and the blown 8-1 lead, in 2013 — Peter Burling and his crew charged to glory, sealing the defence yesterday with a wire-to-wire victory in the 10th race, their fifth straight win.

They had the better boat (marginally), they had the knowledge of local conditions, and they had what was obviously a tight-knit unit of strong, talented sailors boosted by hometown support. That added up to a recipe for success.

The America’s Cup remains something of an outlier, quite unlike a rugby or netball or football or cricket world cup, or an Olympic or Commonwealth Games, the only other sporting events really able to collectively unite the country.

Those extraordinary machines, for a start. Yachts? Really? They are Formula 1 cars on water, space-age technology for the present day. And, interestingly, people seem to either find them awe-inspiring craft or a betrayal of the sport’s roots.

This has also been a rather drawn-out and disrupted event. Two of three ‘‘world series’’ regattas to prepare for the cup were abandoned due to the impacts of the Covid-19 pandemic. Three challengers did not even make it to Auckland. The Prada Cup, the event that determines the final challenger, droned on for weeks, notable mainly for the sight of American Magic’s boat capsizing. Covid had one more say, forcing the delay of the America’s Cup proper when Auckland went back into Alert Level 3.

The finals also started with a disappointing air of predictability. ‘‘Win the start, win the race’’ became the phrase du jour, and those who relish sport’s capricious nature wondered if this was an event destined to be a fizzer.

And, of course, there is the lingering feeling in some quarters that this ‘‘rich man’s sport’’ is a little out of place — that, in a time of housing crisis and post-Covid economic hardship, it is inappropriate for governments and councils to throw hundreds of millions of dollars at a yacht race.

However, there is still something about the event that
grabs the attention, that can be
quite magical.

It is the sight of elite athletes using cutting-edge technology yet still having to rely on old-fashioned sailing nous and reading the weather.

It is a clash like race eight, that crazy contest where one minute Team New Zealand was a beached whale and the next it was a flying shark hunting down its prey; or like race nine, when the thrust-and-parry of match-race yachting was on vivid display.

It is Peter Burling, the Team New Zealand skipper, a sailing prodigy turned ‘‘Captain Cool’’ whose calmness under pressure is a marvel, going against Jimmy Spithill, the hitman, the ‘‘enemy’’ — but someone who it is impossible not to admire.

Once the on-water racing got really interesting — and how nice it remained the focus rather than the controversies and courtroom battles that plagued previous regattas — the crowds poured into Auckland’s viaduct area, and the television ratings were off the charts. It felt good to have a common interest, and it felt good to celebrate, nearly a year since the dark spell of lockdown began.

Now come the questions. Will the Government fund the next defence of the America’s Cup? Where will that defence be? How many nations will be involved? Will our designers be even better? Will Burling and others want to keep going? No ticker-tape parade? But will the team at least come to places like Dunedin to share the joy?

Answers will come. For now, we can drop the sails and bask in a special sporting achievement.

There wasn't any "marginally" about it, ETNZ had the better boat period and I think the author has "droned" on and this article is a "fizzer".