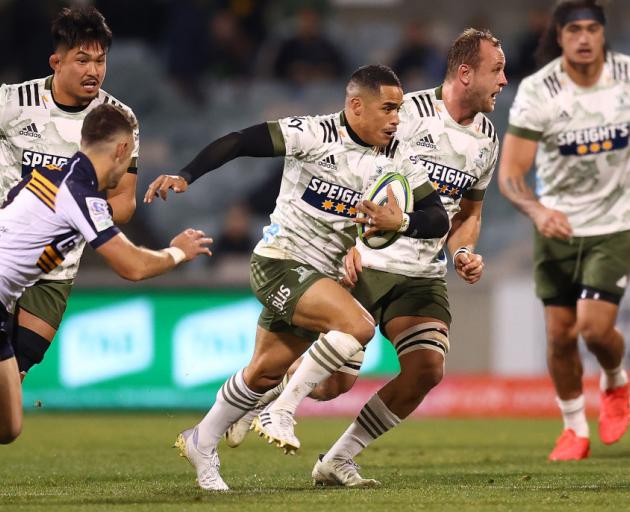 Aaron Smith of the Highlanders makes a line break during the round five Super Rugby Trans-Tasman match between the ACT Brumbies.Photo: Getty Images

The Highlanders have put the pressure on their rivals in the race to make the inaugural Super Rugby Transtasman final, beating the Brumbies 33-12 in Canberra.

Heading into the final round of the competition, the Highlanders were one of several teams bidding to make next week's final. They did their job, earning a bonus point and improving their points differential, and will now sit and wait with the Blues and Crusaders to play on Saturday.

The Highlanders can earn hosting rights if the Crusaders fail to overtake them in the standings, and if the Blues are upset by the Rebels. If the Blues win by any margin, they will move ahead of the Highlanders again and seal their spot in the final.

Despite the fact both the Highlanders and Brumbies wore white shirts and dark shorts in one of the most embarrassing kit clashes you will see in professional sport, they managed to avoid any equally embarrassing moments that you might expect to come from such a clash.

The Highlanders made a strong start in Canberra, with plenty of early territory to attack from. However, it was the Brumbies who opened the scoring 15 minutes into the match. After seeing off the several attacks from the Highlanders, the hosts made the most of getting the ball.

On the back of a strong carry from blindside flanker Rob Valentini which got the Brumbies inside the Highlanders' 22, the hosts moved it on quickly. Eventually, they broke through the visitors' line, with centre Len Ikitau ploughing through from close range.

Their lead was short-lived, however. While the Highlanders couldn't make the most of their opportunities in the opening 15 minutes, they didn't make the same mistake the next time they had a chance to strike.

It was a reliable tactic that got the Highlanders their first points of the night. After being awarded a penalty for Brumbies players being in front of their kicker, the visitors kicked to the corner, and Ash Dixon subsequently rumbled over from the back of the lineout drive.

The Highlanders hit the lead moments later after some slick playmaking from first five-eight Mitch Hunt. Having time with the ball in his hands, Hunt summed up his options and sold a couple of dummy passes which broke the defensive line, before sending speedster Jona Nareki through a gap. Nareki was brought down just short of the line, but found Aaron Smith in support for the try.

But like the Highlanders hit back when the Brumbies scored first, the roles reversed. Again, it was a lineout drive that featured, seeing Brumbies hooker Lachlan Lonergan dot down from the back of it to close the gap to two points at the break.

The second half was a similar story; the Highlanders had the better of the possession and the territory, but the Brumbies' defence held strong and stifled the Highlanders' attack for the most part.

However, conceding tries to Smith and openside flanker Billy Harmon midway through the period saw the Brumbies start to lose touch with their visitors inside the final 20 minutes – while the vital bonus point was within reach for the visitors.

The came just five minutes after Harmon crashed over, when winger Sio Tomkinson ran a forwards' line one off the ruck to shoot himself through a small gap and over the line for what were the final points of the game.

Great win by the Highlanders, but can the morons who run professional sport sort out the teams uniforms, good god,