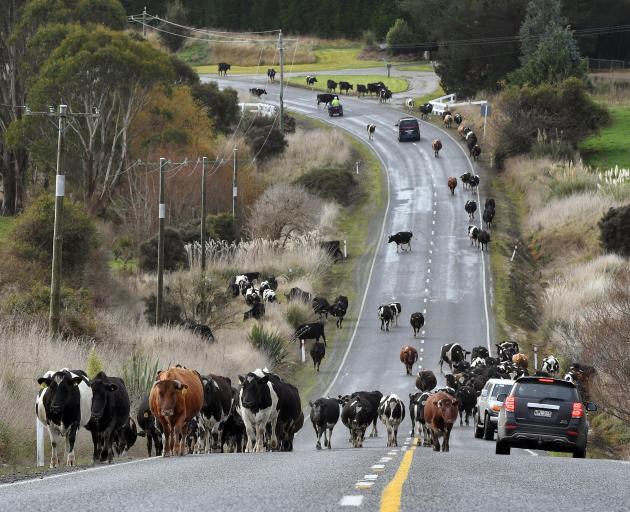 A herd of cows meander up Tunnel Hill on SH92 near Owaka on Monday. They were being driven from their home farm to a runoff block as the Government debated the Mycoplasma bovis disease. Photo: Stephen Jaquiery
Mycoplasma bovis-affected farmer Kerry Dwyer believes the huge amount of stress placed on farmers through the massive cull of cattle will not be worth the result.

Last Monday, the Government unveiled an $886 million plan to eliminate the disease, rather than undertake long-term management. If successful, New Zealand would be the first country in the world to do so.

Mr Dwyer, who voluntarily sent 400 calves to slaughter, said success relied on the premise the Ministry for Primary Industries (MPI) testing regime was accurate and no animals "slip through the net".

It also relied on MPI staff and systems being capable of handling the job and, to date, that premise had not been seen to be valid, he believed.

The majority of animals slaughtered would not be infected, and he did not think that was a valid way to treat animals. There would also be animal welfare issues on farms due to movement restrictions imposed, he believed.

Mr Dwyer and his wife Rosie were at week 20 after lodging their claim for compensation and had not yet received any.

Their claim was solely for animals, but they also intended to lodge a further claim for loss of income.

Last week, Agriculture Minister Damien O’Connor said he had asked MPI to revisit the compensation process, and a new "streamlined" approach had been developed for those whose animals were culled to enable a substantial payment "within a matter of days".

Mr and Mrs Dwyer’s Notice of Direction (NOD) was removed on April 19, five months after their Restricted Place Notice was removed and seven months without cattle on their North Otago farm.

Each week, since mid-April, he had asked why the NOD had been removed. The initial response was  it was procedure. However, the couple wanted to know what had changed in their disease-risk status to allow for the NOD to be lifted.

"I think that is a valid question for any property where the disease has been present. We are currently grazing some cattle and there has been shock and horror from some locals that MPI would allow us to do that."

If MPI could not answer that question, with the logical answer that there was no remaining disease risk, their chances of eradicating the bug were "zero", Mr Dwyer believed.

Dr Daniel Tisch, of the University of Auckland’s department of management and international business, said the eradication programme would challenge farmer resilience.

Resilience addressed the return to normal after a shock. The shock felt by farmers from culling their herds had been widely reported.

"From what we know about resilience, this initial impact will be followed by a recovery period, in which the mental and emotional state of farmers will be affected for years," he said.

The incidence of depression, suicide and other mental health conditions would rise. His research showed those most vulnerable to shock were sharemilkers, farm labourers and dairy hands because they had daily contact with animals now suffering, while the eradication programme would expose farmers to the loss of their entire herd.

It would have consequences for farmer wellbeing extending far beyond the culling schedule. Crown agencies, call centres and other organisations such as Federated Farmers and Rural Support Trust were best placed to support farmer resilience from such effects, he said.

Most vulnerable farmers tended to be early-career males and they were not inclined towards having conversations about what was stressing them, "let alone having a deep and meaningful therapeutic conversation about recovery from shock".

Meeting on a farm or in some type of community centre, such as a town hall or the local pub, was as common way of coping with stress, he said.

He found farmers liked hearing from other farmers in their communities, not only for practical advice but for a calming effect from being with others in the same predicament.

Unless somebody's suggesting that farmers be culled as well, it'd seem to me that all of the stress is actually on the cows.