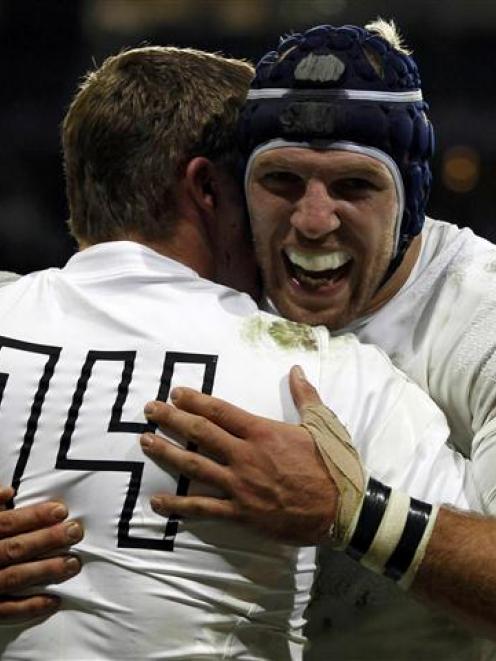 England's Chris Ashton celebrates with teammate James Haskell after scoring a try against Romania. REUTERS/Stefan Wermuth
The paint had barely dried on England's 67-3 thrashing of Romania when manager Martin Johnson began planning for next week's far tougher assignment against Scotland in their final Pool B game.

Depending on what happens when the Scots play Argentina later on Sunday, the match on October 1 could be a straight shootout for top place in the group or a desperate battle for survival with the losers potentially going home the next day.

England scored 10 tries, including hat-tricks for wingers Mark Cueto and Chris Ashton, in an impressive display but with Romania playing a weakened team and producing some of the most naive defending seen at the tournament to date.

The England manager was quick to brush over the match and move on.

"In certain aspects we didn't get fully tested but that's what World Cups are about too," Johnson said.

"These games can be awkward, you get opportunities to do things you don't normally get but when we played with tempo, they struggled to keep up with it so I'm pretty happy -- job done."

Having begun the tournament with three wins over Argentina, Georgia and Romania, and with two bonus points in the bag, England are where they would have hoped and expected to be but they are also well aware there is still much work to be done.

"Next week, it really starts in a way," Johnson said. "It'll be a scrap and we've got to be prepared.

"I've said to the guys, it's not like Six Nations rugby or autumn series rugby. Argentina proved that. The intensity of that game and all those pressures that can be around.

"Hopefully we'll have everyone available Monday and Tuesday for training. For us it's a real big week and hopefully we'll get the performance we need to win that one."

England seem to have come through another game without any serious injury worries.

Number eight Nick Easter, who missed the last two matches with a back problem, is "progressing" Johnson said, while prop Matt Stevens and wing Matt Banahan have recovered from their minor knocks.

Lock Courtney Lawes is also available again having served his two-match suspension while Johnson still has the option of calling up another player as replacement for Andrew Sheridan, who has left the team for shoulder surgery.

With prop David Wilson, hooker Lee Mears and Cueto all getting their first taste of tournament action on Saturday all of England's squad have been involved to some degree.

"We desperately wanted to give some guys some game time and we didn't want to get anyone injured so there was a balance to be had there," Johnson said.

"Really it's a mental thing now this week, to get ourselves ready for this game because it's going to be a big one."

England top Pool B with 14 points, ahead of Scotland on nine and Argentina on six.

All three teams are still in the race for the two qualifying spots, with the group winners likely to play France in the quarter-finals and the runners-up playing favourites New Zealand.