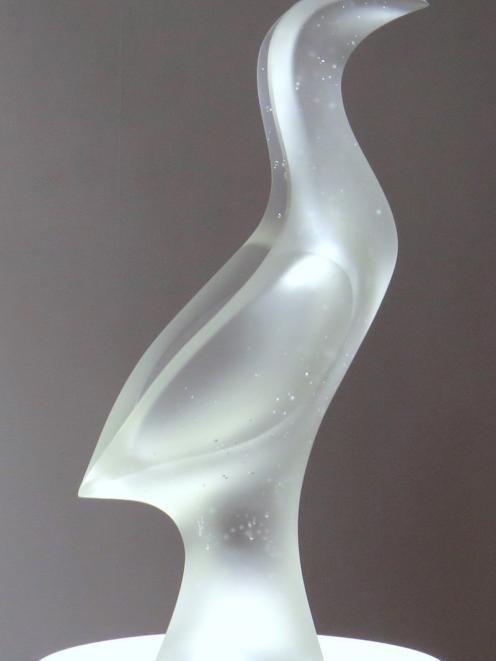 It would not be too far-fetched to say that there is a distinct New Zealand school of glass art — a style which is specifically ours and which is shared to a greater or lesser extent by several of our top artists. Works by Galia Amsel, Christine Cathie, Mike Crawford, Layla Walter and, above all else, Ann Robinson share an aesthetic and ability that puts New Zealand glassmaking in a world class.

Mike Crawford’s work is a beautiful, sensuous exemplar of this school. His bird forms, captured at the moment of flight, are graceful yet powerful, delicate yet strong. The birds are reduced to simplified yet recognisable forms, with a fluidity and simplicity of line in which you can feel the birds straining to rise into the air. Cast with perfect control, the artist has produced exceptional translucent forms in a variety of deep, compelling hues, such as the deep russet Tieke and emerald Pipiwharauroa.

Crawford follows in a long line of New Zealand artists who have been drawn to bird-life as a subject, and cites Don Binney as a major influence on his forms. Binney’s iconic images of stylised birds soaring over New Zealand landscapes find worthy counterparts in Crawford’s sumptuous forms. 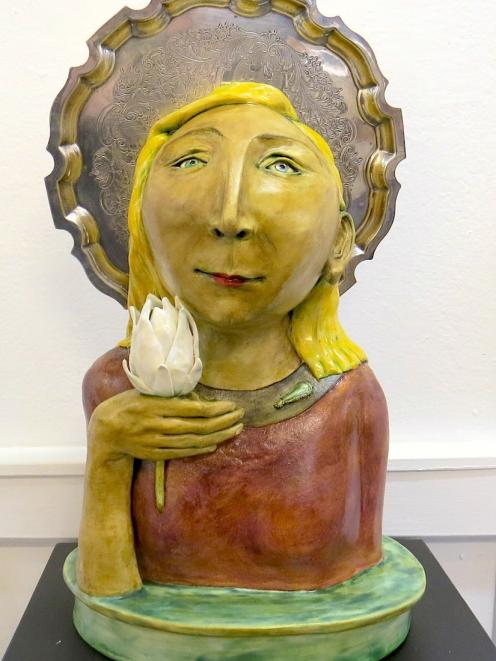 A more direct homage to New Zealand — and overseas — artists is taking place at The Artist’s Room. Painter Nick Eggleston and ceramicist Deb Powell were each given a task to create a series of works, each of which makes a direct nod to an artist that is one of their personal heroes.

It would be fair to say that Powell and Eggleston have taken this idea and run with it, albeit in completely different directions. In Powell’s case, the artist has created a series of small sculptures, each of which is either a portrait of their hero, a homage to one of their artworks, or a combination of the two. Her works, honouring everyone from Hieronymus Bosch to Shane Cotton, are warm and smile-inducing, with images of Rita Angus and Bill Hammond — the latter in the artist’s trademark dripped forest hues — both being standouts. Meanwhile, Eggleston has taken a decidedly different tack, producing a series of his well-known happy tattooed dogs, with the works paying (often cryptic) honour to artists (in a broad sense of the term) ranging from William Morris to Ian Dury. The paintings are light-hearted and enjoyable, painted with typical style and brio, and giving full scope to the artist’s tongue-in-cheek and occasionally risque humour. 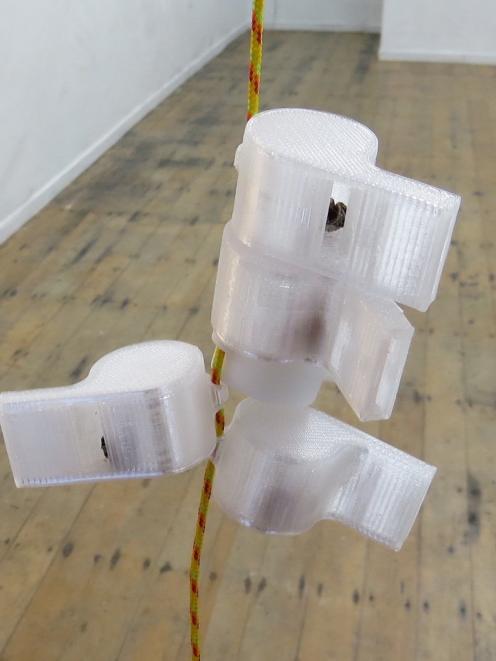 Elearnor Cooper’s exhibition at Blue Oyster poses multilayered questions about the landscape and our efforts to preserve its beauty.

Cooper uses her experience working for the Department of Conservation to bring symbolic aspects of the wild into the gallery. In doing so she asks whether what we see as natural beauty is an idea imposed on us through repeated images of landscapes, a synthetic nature very different from the often more gruesome truth of nature red in tooth and claw. There is an irony that much of Cooper’s Doc work was on Kawau Island, the paradise created by Governor George Grey as an open air menagerie-come-nature reserve.

This synthesisation of nature is represented in the exhibition by 3-D printed whistles designed to imitate the call of long-tailed cuckoos. A series of photograms, photographic prints created by direct exposure to sunlight after objects have been placed on the paper (in this case, pine needles), capture moments of time in the forest. Items which we might simply sweep away or trample underfoot are presented as symbols of the ephemeral nature of all growth. More intriguing still is a series of karate Bo staffs, defensive tools used to ward off sea lions during surveys of colonies, here decorated with images of kelp.