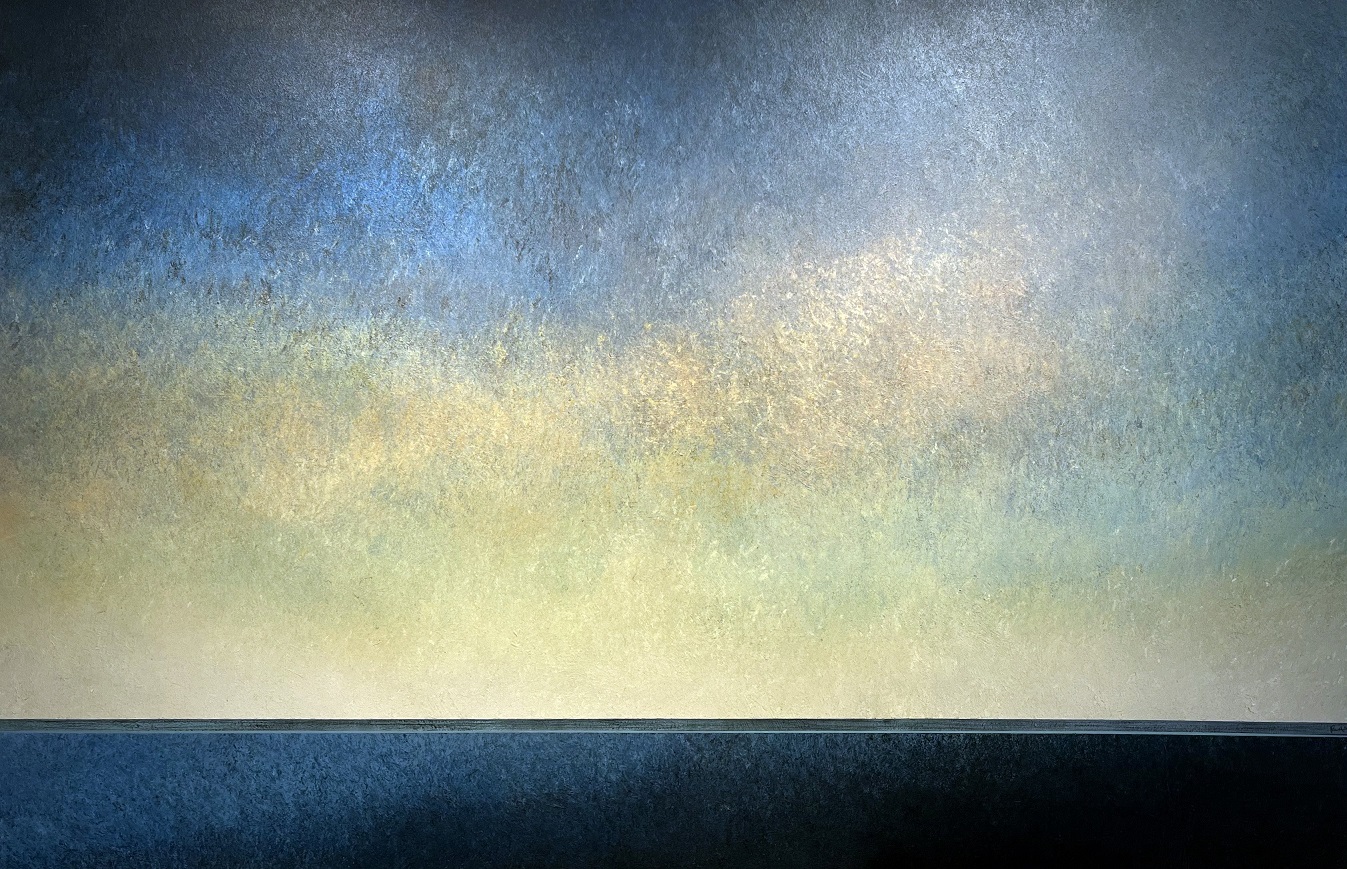 Although technically abstract, there is no mistaking the evocative sense of place and feeling in Richard Adams’s landscapes. His work is always incredibly precise, rigidly geometric and minimalistic in composition, but unrestrained and powerful within those structural boundaries. His latest exhibition, "Horizon", is literally forward-focused, concentrating on the distant meeting of land, sea and sky, and the infinite unknown beyond our field of vision.

In Skyline, the faintest flickering of sunlight breaks through gathered clouds, with the suggestion of darkened hills shrouded in atmospheric mist. The lower section of the work is reminiscent of both textured earth and wood grain, grounding the dreamy, ephemeral scene. The wash of golden light spreading across All Blue Horizon sends the eye travelling around the canvas, following the rising glow up to sinking shadows, while Horizon and Beyond limits the palette to the cool tones of a winter storm.

Central Horizon and Patchwork mark a slight departure from the other works, venturing further into explicit abstraction with vertical blocks of colour, sitting fractionally askew in their grids to add a sense of layering and illusive three-dimensionality. The use of solid black panels plays with the eye and mind, making various sections advance or retreat depending on where you focus. For all the mathematical precision, there’s a fluidity to the arrangement, as if the works convey a form of visual poetry and storytelling. 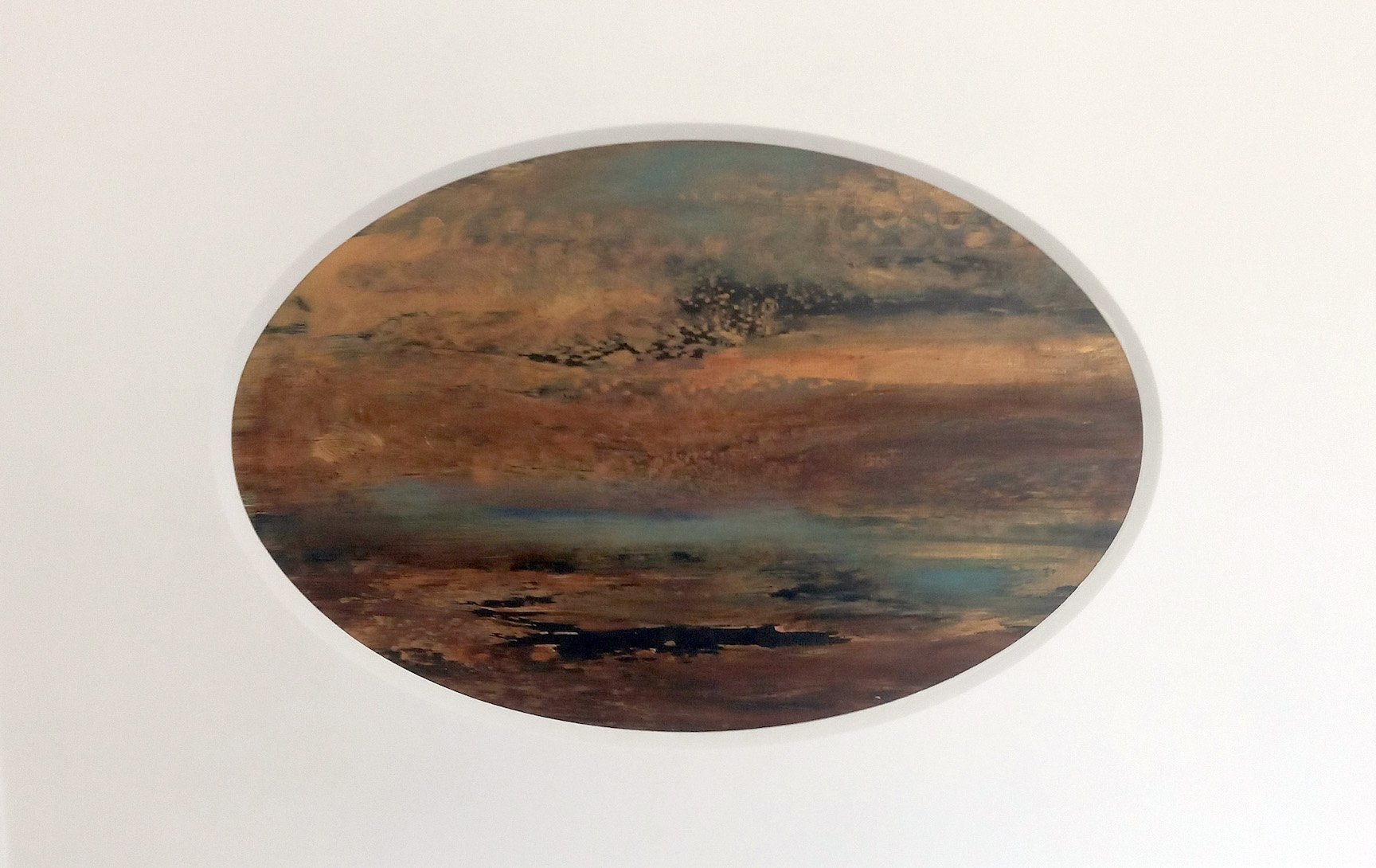 Among the new work at Cromwell’s Hullabaloo Art Space, artists Ro Bradshaw and Gail de Jong are exhibiting together, with pieces that complement and communicate with one another, continuing a visual narrative of the local landscape. Both artists use earthy, sunbaked colours and textural surfaces, like the plains and mountains weathered by the elements. With every composition, there’s the sense of imagery arising from the land— art and creation that’s part of the natural world, rather than a second-hand reflection of it.

In her Strata Series, Bradshaw uses teabag paper, rusted tones and patterns encroaching across the surface, as if nature is creeping in to claim its territory. The bands of colour create a sense of infinite open space and possibility, the dry heat and long days of summer. Bradshaw’s signature tiny lone bird soars through the sky, passing across each canvas as we follow its journey.

De Jong’s Microcosm series focuses on small works, mounted in matte white frames which draw the eye directly into the scene. Painting with oils on to reflective black aluminum panels, she juxtaposes the most classical painting tradition with industrial materials, to evocative and sometimes ethereal effect. There are rarely strict lines and divisions in De Jong’s technique — light and shadows collide and blur, golden plains edge into the darkening horizon, and clouds glide in the misty pink of the moving sun. 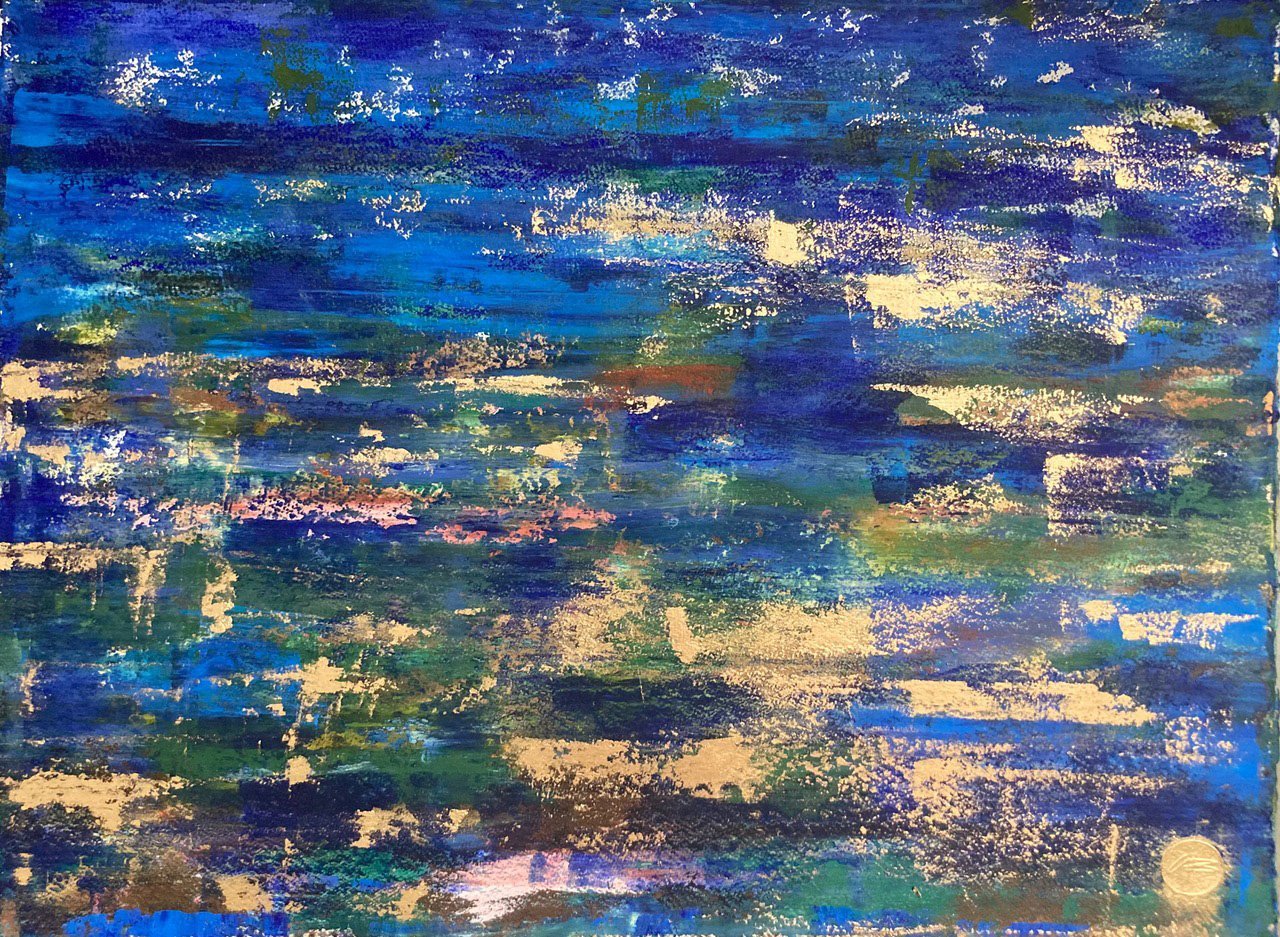 Within the depths of jewel-toned blue, a scattering of gold glints against hints of green, perfectly capturing the impression of sunlight sparkling across the river. The surface of the works appear to shimmer with movement, as if reflected branches and leaves are waving in the breeze. Gretl Barzotto’s work is beautiful, lushly opulent with colour and texture. The use of cold wax medium — in which beeswax is mixed with a small amount of solvent or resin, and blended with oil paint or pigments — produces thick, iridescent layers, individual strokes blurring into cohesive imagery. Barzotto makes her own wax mediums and grinds inks, utilising local materials and inspiration, the process an intimate engagement with every part of the art creation.

In her mixed-media watercolour series, Between the River, the composition becomes yet more abstract, a flashing impression of solitary walks by the water, daydreaming under the overhanging trees, snatches of slightly blurred memory. Her Three Little Nuggets are both rugged and pretty, the textural gold blending into ochre tones, emulating the craggy surface of rock. The whole collection is fascinating, but a favourite is the Midnight Blue series, painted on wooden boards, in which the gold pigment drifts through incredibly rich, deep blue. There’s an intense serenity to the pieces, like looking up at a peaceful night sky, at moonlight on the water, or a calm mind thinking golden, magical thoughts.