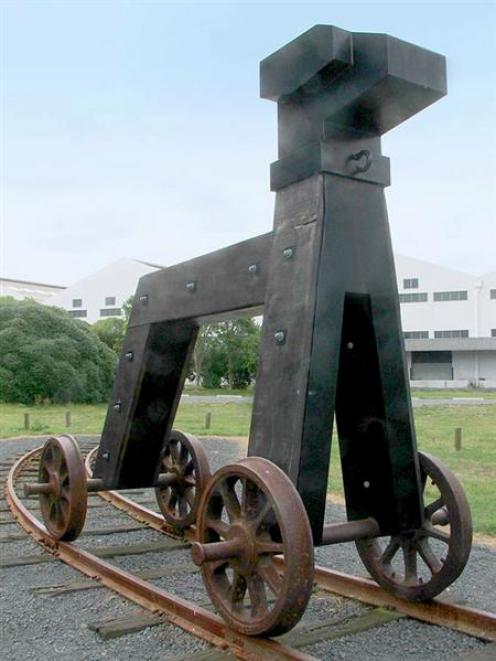 <i>Kuri</i>, by Stephen Mulqueen.
Dunedin's recent run of sunny weather has allowed a fine chance to explore some of the city's public sculptures. Three relatively recent works drawing from widely different traditions are to be found at the city's shoreline, gardens, and urban heart.

Close to the mouth of the Leith stands "Kuri" - a sturdily constructed work by Steven Mulqueen commissioned by the City Council in 2007.

Initially controversial (as is much modern public sculpture), this is a lovely piece that reflects on its surroundings with gentle humour while creating a fine sentinel guarding our shore.

Constructed from hefty timbers and recycled railway parts, the work is in keeping with several other pieces around the city, notably Peter Nicholls' university and harbour basin works.

The sculpture takes the form of a colossal black dog - the coloration and blocky head perhaps suggesting a rottweiler - mounted on wheels on a short stretch of rusted track facing the harbour.

The form is solid and dependable, as any good watchdog should be, and the rusty wheels indicate the dog's lengthy vigil.

There is a subtle pun, too - "dogs" are the parts of a rail track that hold the rails securely in place. So too does our city's watchdog symbolically keep the city secure. 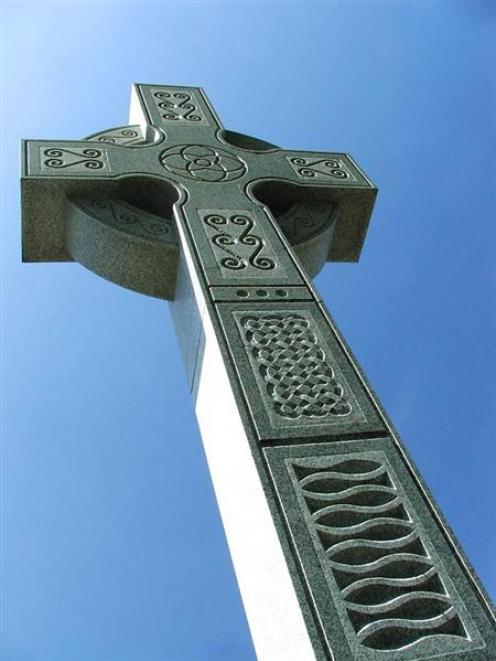 <i>Celtic Cross</i>, by Stephen Mulqueen/Bingham and Co.
Mulqueen, in association with masons Bingham and Company, also had a large input into the graceful Celtic Cross that stands in Queens Gardens close to the Settlers Museum.

Given to Dunedin by the city's Christian churches, its location is deliberate, commemorating as it does both the second millennium of Christianity and the Church's part in the city's founding.

The choice of granite is significant. Local volcanic stone is basalt, but granite represents the more commonly-found rock of the settlers' Scottish homeland.

The cross is heavily and attractively decorated with symbolic forms narrating and illustrating aspects of Christian and settler history. Thankfully, unlike much public sculpture, a full explanation is presented on a nearby plinth.

The cross is steeped in Celtic Christian design traditions, but also encompasses features reflecting Maori art and language, and is inscribed in both English and Te Reo.

The one perhaps surprising omission is Gaelic, which was still the mother tongue many of the city's settlers (indeed, some churches conducted services entirely in Gaelic).

It is sad that weathering has reduced the visibility of the cross's inscriptions and images - hopefully at some stage this will be remedied. The cross is well worth taking time to view, rather than simply rushing by on the city's one-way system. 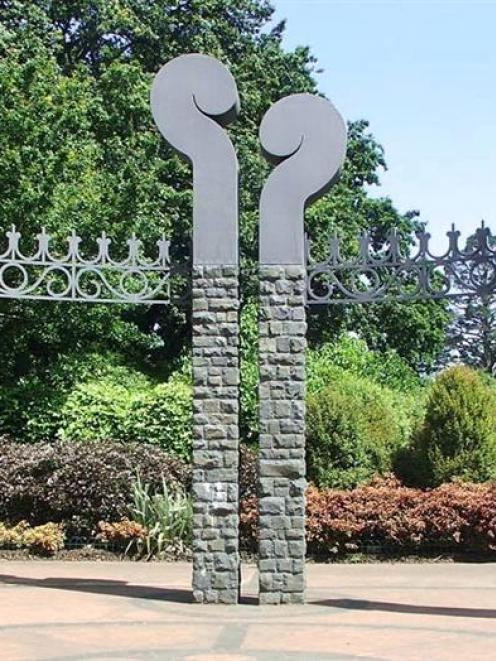 <i>Botanic Garden Entrance</i>, by Stuart Griffiths.
Stuart Griffith's northern entrance to the Botanic Garden was built with the help of the city council in 1999 to mark the city's sesquicentenary. It consists of four stone columns embedded in a paved base and connected by arcs of steel.

Given the work's commemoration of European settlement, there is no small irony in the pronounced Maori aspects of the structure's columns.

The koru is a major design element, and the columns are strongly reminiscent of that most famous Maori carving, the imposing and gracile Uenuku, albeit in a more robust form.

The columns also suggest Maori gateway posts, though the stonework more strongly reflects the construction of Dunedin's grander old buildings, and colonial villa ornamentation is recalled in the designs of the steel spans.

The structure stands at the end of a concrete walkway, allowing it to be viewed to its best advantage as it is approached.

One subtle, yet important feature is the exact replication of the patterns of the garden's wrought-iron gates in the pathway's inlaid stones.

As such, from immediately outside the garden, the eyes seem drawn along an extended horizontal gate to focus directly on the sculpture. This vista is perhaps the greatest achievement of the portal, causing it to dominate while simultaneously drawing the visitor in to the garden's embrace.