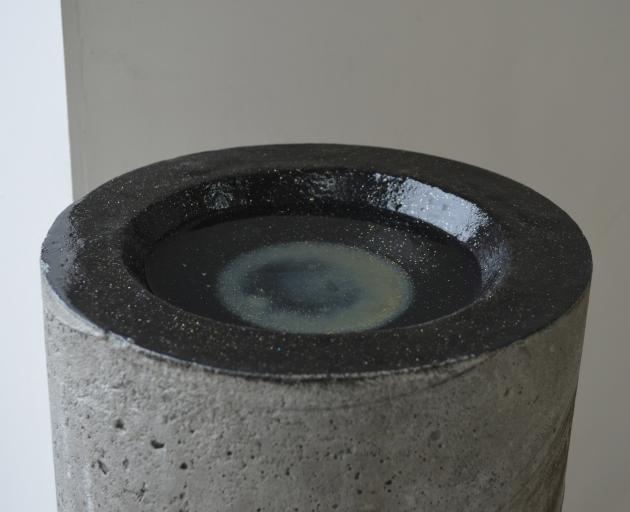 Curated by Raewyn Martyn, ''Not standing still'' is a maximal exhibition that asks visitors to consider art and living systems as entanglements of energetic matter.

Martyn's curatorial premise hinges on energy conceived as agitation and on living systems as diverse, and how these diverse, agitated living systems manifest in contemporary artistic practice. Or, put differently, ''how is this work alive or living, and what systems are integral to its being?''

The premise and the working relationships developed with the 19 artists and two writers involved in the exhibition have coalesced to provoke an experience that resists neat summaries and tidy associations. That is, the works manifest multiple systems and are given equal weight. There is no one system, no singular imperative.

Several works incorporate living matter or nature more explicitly than others, including one of Martyn's biomineralisation works made from cellulose (Untitled, 2018). 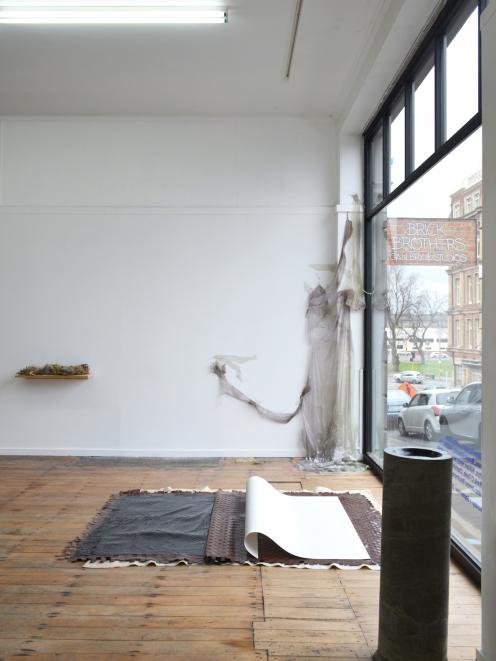 Not standing still (installation view), curated by Raewyn Martyn, Blue Oyster
Over the duration of the exhibition as the cellulose skein expands and contracts with heat and humidity, crystals have formed on its delicate surface. Or perhaps the crystals form in response to chemical decomposition and re-composition. In any regard, it is a work that is manifestly alive, growing, adapting and changing.

If Martyn's work can exist without human intervention, Aroha Novak's sculptural work Weight of the water (2018) invites human interaction. In fact, the work is an invitation - to engage with the exhibition space as sacred. In a slender concrete cylinder with a small basin, Novak has collected water from Toitu awa (stream).

Visitors are invited to dip their fingers in the small basin as a type of ritual cleansing before continuing into the main gallery. When the water evaporates or is depleted Novak will replenish it, and the human-assisted, living system will continue.

Continuity is present in Charlotte Parallel's experimental work The Piezoelectric Effect (2018), or perhaps it would be more accurate to say that the elements of this work are in continual dialogue.

The elements are piezo crystals that Parallel has made, hooked up to amplifiers, and positioned as if face-to-face. Depending on the level of ambient noise it may be possible to hear - in transposed form - what the crystals are saying to each other. In this living system, the visitor can eavesdrop on the live sounds of crystals.

In many respects ''Not standing still'' can be described as a relational exhibition that has grown from the connections Martyn made during her time as the Blue Oyster and Caselberg artist in residence.

It is noteworthy that many of the artists included in the exhibition are based in Dunedin, and there is a strong sense that Martyn has encouraged and fostered collaborations between local artists via the curatorial process.

If night is an invitation to shift modes of consciousness, Robert George's video work The Embrace of Night (Go to Sleep) evokes this shift through fragmented, layered imagery that oscillates between rapid edits and drawn out frames.

George's video appears to capture the inchoate workings of the mind before sleep as it churns through the days' events, isolating particular moments, making further associations, and replaying them over and over.

Yet the subject of George's film, when coupled with the gentle urging in the work's bracketed title (Go to Sleep), provokes an additional interpretation.

The most distinct and repeated figure is that of a Cook Island woman wearing an ei (flowers behind her ears) undulating her hands in a traditional kapa rima (dance with hand movements). Here it is important to note that Robert George is a film-maker of Cook Island and Maori descent, and his fragmented presentation of the dancer is largely inaccessible. The intention is purposive.

George's work can be read as an attempt to interrupt, to quite literally deconstruct the image of the traditionally welcoming (read ''available'') Pacific Island woman: an interpretation that the work's title (Go to Sleep) perhaps underscores. George heightens the dissonance by moving between frame ratios, brief flares of pure digital colour, and an industrial soundtrack. Best viewed at night.