Art seen: Dunedin then and now 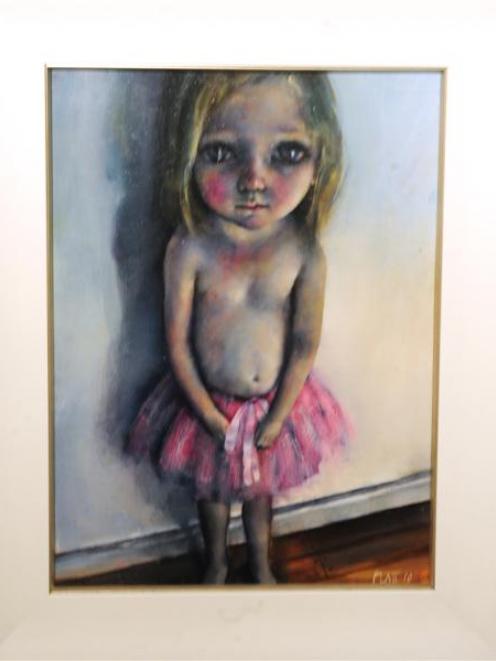 Heidi, by Suzy Platt.
Chanelle Carrick looks at the latest exhibitions around Dunedin.

With an open theme, this year's Premier Art Awards contain more than 160 works which explore a wide range of artistic interests and media.

Here, the artist plays with proportion; her depiction of a young girl, naked apart from a pink tutu, emanates a sense of unease.

The girl's overly large eyes and head draw the viewer into an immense stare that is both endearing and disturbing.

In the large canvas SheScape, Jemima Pedro presents a view of the human form which is at once gestural and solid.

The female figure lies on her side, her limbs and body dominating the work's cramped, dark space.

Pared down into its most basic forms, Pedro's figure is constructed simultaneously of blocks of glowing colour and expressive line, creating a constant shift between its monumental and lyrical nature.

Allan McMorran's watercolour Silhouette in the Morning Mist contains a similar tension between an awareness of the work's surface and an illusion of depth.

Containing many more engaging works, this exhibition is a must-see celebration of local talent.

The Stuart Street Potters Co-operative is a gallery run by local potters and ceramic artists, and it is well worth visiting regularly to see the new work being produced in this medium.

One such artist whose work is currently on display is Jo Howard.

Producing a range of decorative bowls, vessels, wall tiles, and smaller ornaments, Howard first creates her designs and then translates them into physical forms, or what she refers to as "functional painting."

Her works, decorated in attractive pastel shades, are charming and fun.

A series of wall tiles and magnets, for example, consists of beautifully designed relief cupcakes, teacups, and teapots which function as individual pieces or part of a set.

It is Howard's large, shallow bowls, however, that are particularly striking.

Decorated inside with a variety of patterns or scenes, these pieces demonstrate the artist's skill as both a ceramicist and a designer.

One motif seen in some of these works is the floating dandelion seed, repeated across the blue interior of a bowl.

Painted in white with red detailing, the delicacy of Howard's design emulates the graceful movement of the seed through the air.

These works are indeed functional as well as beautiful, and represent the artist's distinctive combination of the ceramic and graphic arts.

The show "100 Up" presents an opportunity to consider differences and similarities between life in Dunedin in the early 20th century and today.

The exhibition juxtaposes historic photographs with those by contemporary Dunedin photographer Max Oettli, encouraging viewers to contemplate the past and processes of social change.

Many of the historic photographs evoke a sense of nostalgia.

Yet they also allow the viewer to discover the city's history and to visualise the place of that history in the Dunedin of today.

Many similarities are revealed through the direct comparison of images; the elaborate facade of Dunedin's "Royal Arcade" on High St, for example, holds many connections with Oettli's photograph of our newest arcade, the Wall Street mall.

In other images, technological advances are clear.

Computers are now present in schools and industry offices, and trams have been replaced by buses.

Even the nature of Oettli's photographs themselves, as digital colour prints, emphasises the speed at which technology has developed in the past century.

Also containing other historic material, such as posters, maps, and scrapbooks, this exhibition is a fascinating glimpse of the life of a city, which will appeal to both local inhabitants and visitors.