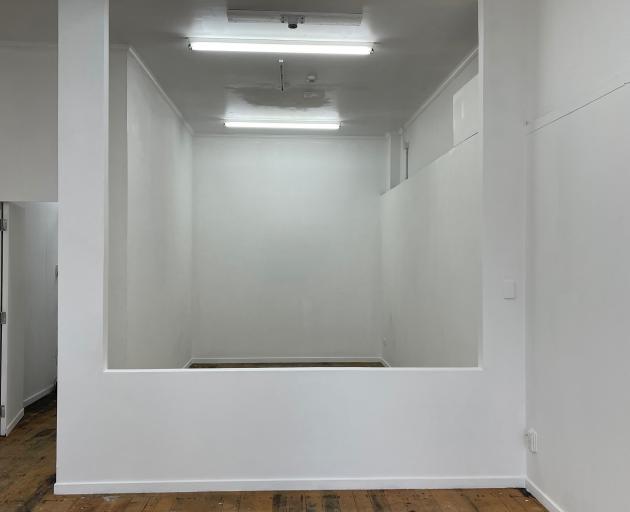 In the 1970s, American artist Gordon Matta-Clark (1943-78) removed entire external walls to reveal the inside of buildings, cut out squares between floors in multi-storey apartments, excised shapes from interior walls and split adjoining flats in two. New Zealand artist Fiona Connor (1981-) continues to make architectural interventions, replications, and distortions in gallery spaces. In 2017, emerging artist Ammon Ngakuru cut a slender, yet taller than standard "door" in the wall between the front and back galleries at Blue Oyster as part of his exhibition "A Shelter for Amnesiac Relatives". It is not so much the divergent conceptual frameworks that informed the architectural interventions in these different artists’ works that are of note, but the very malleability of physical infrastructures themselves. Of course, conceptual origin and physical embodiment inform each other, but the imprints and extractions physical structures are forced to bear are significant.

In "Somewhere Between Nothing and Nowhere", a collaborative work between Phoebe Hinchliff and Luke Shaw, the gallery space is reshaped to embody phenomenological experiences of indeterminacy, as the title indicates. As architectural interventions, indeterminacy or the state of being in between pivots on the dynamic of absence and presence. This juxtaposition is most evident in the large vertical rectangular space the artists have removed from the wall between the front and back galleries. It is evident through sheer absence (especially if you know the space well) and, correspondingly, by the spatial presence of the back gallery that is now opened up. The visitor is between spaces. Visual and embodied experiences of indeterminacy are augmented by the audio component of this work, in which the note G plays in one space and A in the other for specific periods of time. If there is a sense of spatial release in the newly opened aperture, this is heightened by the cessation of the notes. But to heighten the release of tension, the audio component contributes to building this very tension. Semantically, the title of the work, As the Crow Flies (2021) lends levity and aerial spaciousness.

If this is a window a crow could speculatively fly through, Hinchliff and Shaw’s second architectural intervention involves an actual window that was covered over with MDF cladding in the gallery’s storage and (newly located) office space. This uncovering also toys with absence and presence, and tension and release. While the uncovered window lets in a measure of light from the alley, it is heavily barred and, therefore, a somewhat ominous revelation. The bars could reference the railway tracks between Christchurch and Dunedin that the artists observed and researched as part of this exhibition. The importance of rail history to their research is indexed by the size of the excised shape in the first intervention, which replicates that of the Norwood railway station sign between Christchurch and Ashburton. In the course of thinking through the ideas and their embodiment for this exhibition, the journey between Christchurch and Dunedin was formative. 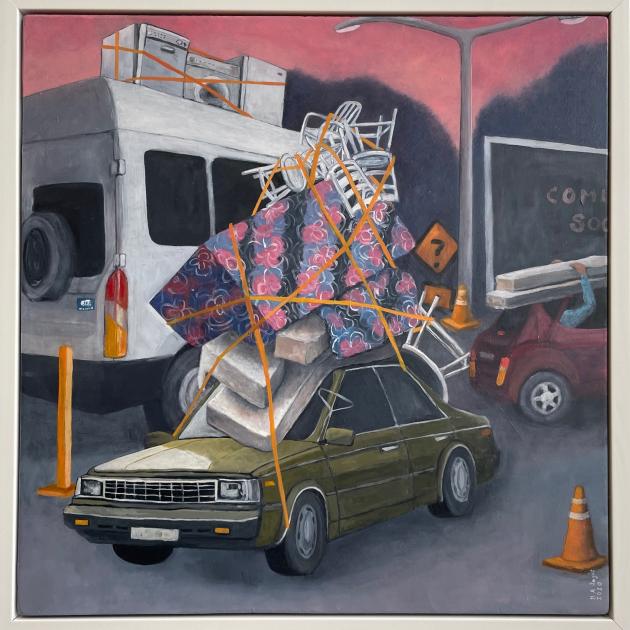 Self Contained, by Hannah Joynt

Absurdity is most certainly evident in Hannah Joynt’s suite of paintings at Olga, as Rebecca Fox notes in her feature article. Joynt’s oil on board paintings includes SUP Venus (2020), which hauls Botticelli’s Venus (from The Birth of Venus, c1484-86) out of the Renaissance into the present day. Her scallop shell has become a paddleboard and her entourage of goddesses and god have transmuted into individualistic yoga practitioners undertaking advanced asanas on paddleboards of their own. The challenges of tackling the theme of the absurd in the era of late capitalism are however manifold as there is little in life that is able to resist neither commodification nor becoming a visual spectacle. To take a recent example, the footage of Bernie Sanders wearing homespun-style mittens at Joe Biden’s presidential inauguration quickly went viral with Sanders turning up in wildly disparate digitally manipulated scenarios and memes shared on multiple social media platforms. The absurdity of real life is hard to beat.

Two works in Joynt’s exhibition courted the absurd while simultaneously engaging with less sensationalised scenarios: Self Contained (2020) and Car Bed (2020). Both paintings depict vehicles packed with belongings and stacked with furniture on top. While these modes of living are arguably absurd, what is truly absurd is the vast disparity of wealth accumulation and distribution that continues to force people into situations of extreme precarity and vulnerability. Here, the trickle down effect has struck a drought.