The politics of environmentalism have never been far beneath the surface of Nigel Brown's work, often breaking through to point a green finger at us. In his latest exhibition, Brown aims both barrels squarely at those whose actions and inactions threaten the world with climate change, in doing so producing one of his strongest bodies of work.

Brown's images in this current display feel like a culmination of many of the motifs and themes that have long inhabited his oeuvre. Indeed, the massive titular triptych feels ready to burst at the seams with icons and signifiers. The Kiwi everyman and woman with kereru nestling in their protective arms are joined increasingly by the black dog, now moving centrally as a literal image of a symbiosis of human and nature and a metaphorical emblem as the depressing clouds of uncertainty hanging over the natural world.

Brown's style and image constantly reference New Zealand art history and his own life's work, combining in spirit and fact both painting and woodcut, most notably in the block-like canvas of Cook Dissolution. Significantly, several of the works are in the form of cutouts, layered to form three-dimensional images within images. This reaches a peak in the painted woodcut block, Dogged by Raw Emotions. 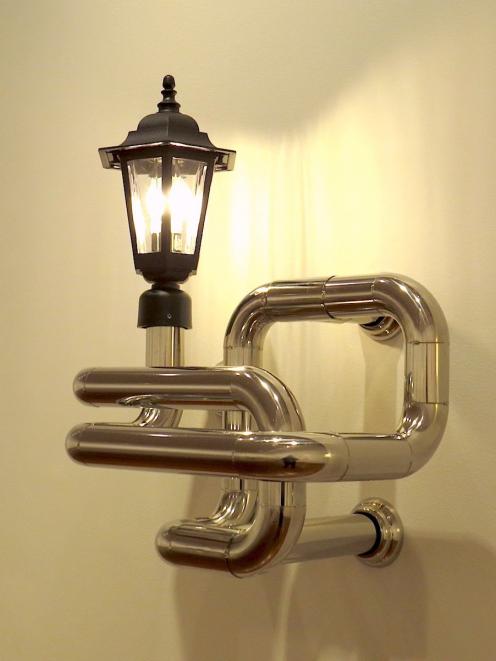 Lee, whose practice includes both large-scale installations and smaller-scale pieces has in this exhibition created an extended series of small works inspired by architectural and domestic design. Each piece consists of a found household object (a lamp, a tabletop, a mop) attached to stainless steel piping.

The works create a strange frisson with their juxtaposition of the familiar and the impersonal. They lie somewhere on a curve between early surrealist works by Duchamp and Picabia and the modern subculture of steampunk. The pieces also conjure up images of brass musical instruments which have somehow evolved into living forms. The combination of objects and pipes forces us to consider the everyday items from a new perspective, and provides flights of fancy relating to residential design and decoration.

Lee's exhibition is an intriguing and successful exploration and development of a physical language of angle and form, an exploration which has been extended in many permutations over a series of closely related works. In the process of her investigations she has created a fascinating and oddly beautiful set of sculptures.

Fair and Gay Goes Lent Away, by Julia Morison

‘‘The Brink’’ is an intriguing exhibition at the Dunedin Public Art Gallery focusing on artists' use of contrast, both in terms of literal light and shade and also in its various metaphorical and psychological senses. The exhibition comprises both photographic and painted works, drawn from the gallery's permanent and loan collections.

Photography naturally lends itself to the study and interplay of light and shade, and here finds voice in mysterious moody chiaroscuro from Peter Peryer, studies of natural structures by Gordon Walters, and a charged and transgressive portrait by Christine Webster.

The shadow of Colin McCahon hangs over several of the painted pieces. As well as a work by the master himself, a playfully pointed work by Peter Robinson clearly nods to his style, and John Reynolds’ colossal meandering mental journey directly references McCahon. Reynolds' map is mirrored in negative form by the explosion of dark colour that is his The View from the Top of the Cliff. Minimalist use of nuanced white and black are explored respectively by Seraphine Pick and Ralph Hotere, both works rewarding the viewer with close meditative inspection. The final work on display, by Julia Morison, has an element of unease, with its curling three-dimensional forms seemingly at odds with the exaggerated flatness of the painting's tone and style.