‘‘TIME is Love’’ is a collaborative exhibition of video art showing at the Blue Oyster for a two-week period. Established by Togolese-French curator Kisito Assangni in 2008, ‘‘TIME is Love’’ is an itinerant exhibition facilitated by The Nomadic Art Gallery in collaboration with the Blue Oyster. The itinerant nature of Assangni’s project dovetails perfectly with the similarly itinerant practice of The Nomadic Art Gallery created by Belgians Arthur Buerms and Eugenie Coche in January 2020 as a mode of presenting pop-up exhibitions and public performances throughout Aotearoa. Buerms and Coche travel in a converted truck which doubles as home and gallery, with exhibitions shown in the back of the gallery, while the truck itself is conceived as a public participatory artwork as invited artists make works for the sides and back of the truck.

For this, the 12th iteration of ‘‘TIME is Love’’, and the first screening in Aotearoa, the theme is Universal Feelings: Myths & Conjunctions. Assangni has selected 17 video works from Europe, Africa, Scandinavia, and North and South America. The video works have been separated into three looped sequences and are presented on two monitors (with headphones) in the main gallery space, and as a projection in the small gallery. In addition to daily screenings, each night a single film will be reverse projected on to the gallery’s front window so as to be viewed from the street. 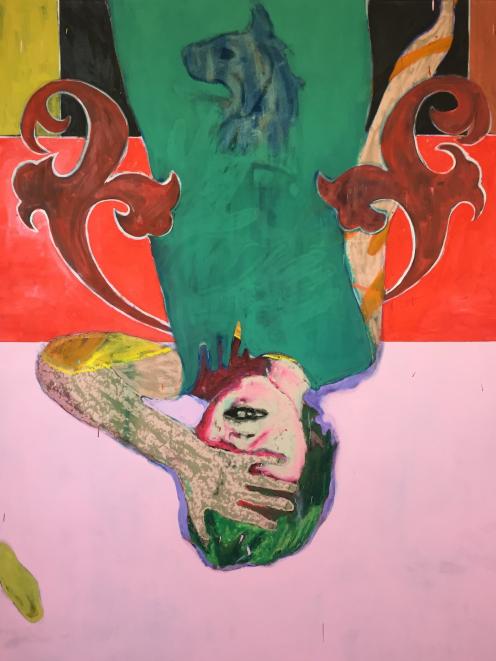 THE choice of ‘‘folk art’’ in the title of Pete Wheeler’s exhibition is a wry one, for Wheeler — in this suite of seven paintings — is both sophisticated and knowing in his reworking of art historical movements and styles, such as German Neo-expressionism. The ‘‘apocalypse’’ in the title, however, is apt, and registers as the abject in objects such as an abandoned shopping trolley, in the similarly abject figure of the harlequin, the crossing of an animated skeleton hand with a fleshly one, and two paintings of a young boy: one distressed, the other in an uneasy composition with flames.

It is perhaps an injustice of sorts to isolate these figurative subjects however, as they co-exist with elements of abstraction, such as blocks of colour and grid formations. While the grid could easily refer to our recent experience of lockdown and feelings of being shut in, or isolated, it is equally present as an aspect of painterly language. The figurative and the abstract co-constitute one another intimately in Wheeler’s paintings.

An especially striking painting is History doesn’t repeat / But it rhymes (2019-20), which conflates figure and ground in unexpected ways. The distress of the young boy, who is depicted upside down (in a nod to Georg Baselitz) is in concert with and amplified by the large pink block of colour either side of his head, and an emulsion-patterned arm. 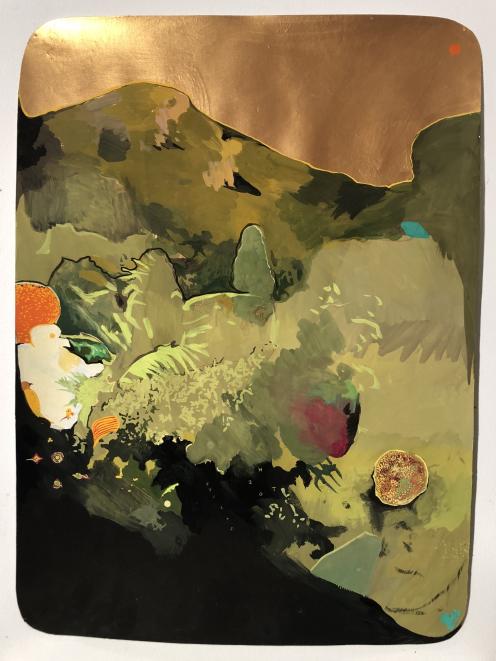 ‘‘Tomorrow Shall Be My Dancing Day’’, Henry Turner

‘‘Tomorrow Shall Be My Dancing Day’’ is the first solo exhibition of Christchurch artist Henry Turner in Dunedin. It comprises 10 small-scale gouache on panel works in a predominantly surrealist style. The first painting, Hill of Monkeys (2020), is, for the most part, an arcadian, pastoral scene with fruit-like forms in vibrant colours under a golden sky, although the darker tones at the bottom of the painting signal the apocalyptic themes to come. These are particularly evident in the last painting Wir Sind Uns Lang Verloren Gegangen, 2020 (which loosely translates to: we got lost long ago). All that was golden has turned most lost. A green-tinged moon, and flames coursing the crest of hills beyond the harbour, and erupting in the foreground illuminate an otherwise blackened world. Tree stumps with encircling snakes emphasise this end-of-times scene.

Until the world does erupt, Turner deploys bright yellow and gold respectively as backdrops for decorative compositions of seeds, blossoms, and plants. A small, white dog makes two appearances, as does the harbour and snakes, which both build towards the last painting. In Bitter’s End (2020), the snakes function as subject and border: their writhing intestinal forms confront the viewer with fangs bared in the centre, while a coiled snake-like form envelopes them.