In this week's Art Seen, Robyn Maree Pickens looks at exhibitions by Rebecca Baumann, the Reed Gallery, and Jacquelyn Greenbank. 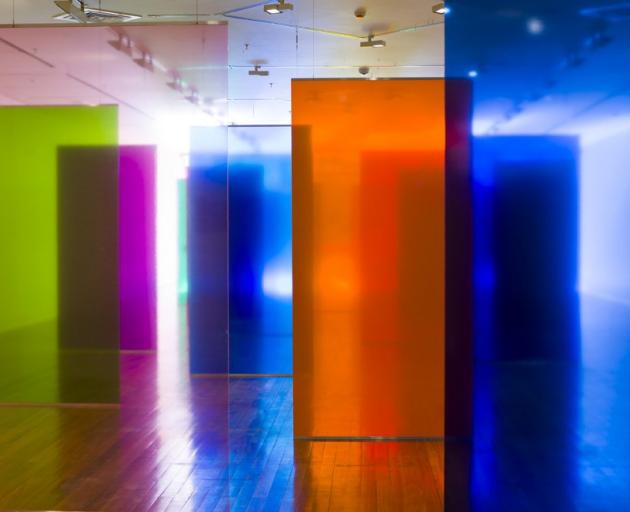 Despite the disorder and chaos suggested by the bracketed title of Rebecca Baumann's exhibition Untitled (exploded view), the expanded work, which stretches the length of the Trustbank Gallery, is measured, calm and considered.

From the gallery's entrance to the large bank of windows at the opposite end, Baumann has installed 24 planes of translucent colour at staggered intervals.

The translucent quality of the planes, and their positioning enables slippages between partial and full views that stage a play of colour relationships. Colour becomes movement, a movement that is enhanced by the positioning of the colour planes as an interplay of entrances, partitions and egresses.

Baumann's interest in colour theory is apparent in the deployment of 24 planes, the number of colours in the full colour wheel, which is comprised of primary, secondary, and tertiary colours. But this interest is understated to accommodate the site-specificity of the work.

That Baumann has spent time as an artist in residence is evident. The scale of the planes relates to, but is not an exact replica of, the large windows that face the Octagon.

Here too, at the interface between gallery and the outside world, Baumann has made an intervention in the armature of the window panes by overlaying strips of colour over slender sections of glass to resemble stained-glass windows. 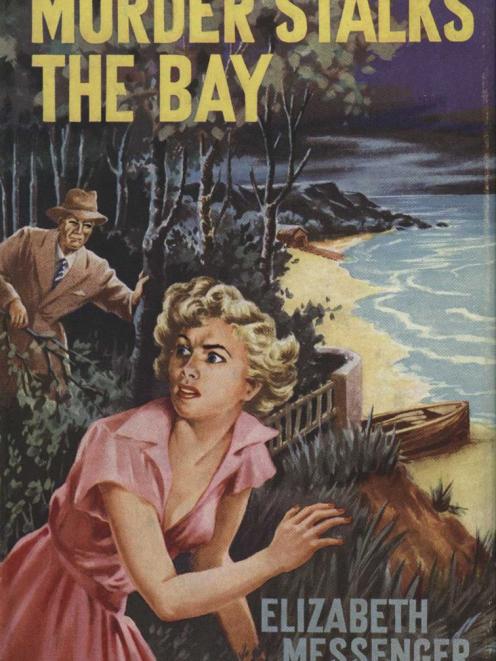 If crime is not your go-to genre, Authors in Crime, an exhibition of New Zealand crime books, may tempt you down this suspenseful path. Curated by Margie Michael and Lorraine Johnston, the 16 vitrines and six wall carrels present an overview of the genre that includes contemporary psychological thrillers by Dunedin-based writer Paddy Richardson, and the University of Otago's Liam McIlvanney, among other local authors.

Contemporary crime writing is well represented, but no survey of the genre would be complete without Dame Ngaio Marsh, who heads the exhibition in the first vitrine with books from the 1950s-1980s. Stretching back to 1888 is the earliest book in the exhibition, By Passion Driven, published by Dunedin company by J. Wilkie & Co.

But where is the art? As well as providing a visual survey of New Zealand crime, and a historical snapshot of the past 130 years, book exhibitions offer the art of the book in the form of design, typeface, and image (illustration, photograph).

Some designers manage the interplay of these three elements more successfully than others, as the viewer will be able to judge. Perhaps the most captivating book covers are the so-called ''penny dreadfuls'' that feature lurid illustrations depicting overwrought heroines and avuncular heroes in trench coats. 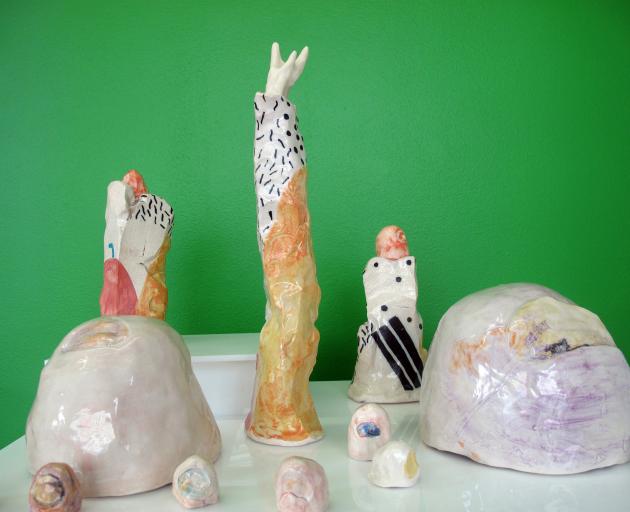 With the title of ''Green Bank'', Jacquelyn Greenbank's punning only begins with her name, which incidentally, goes in two directions. The ''Green'' references the wall colour chosen as a backdrop to the artefacts, which are housed in a type of ''Bank'', here referring to a museum, or preservation space.

The presentation of the artefacts in this small space acknowledges the original use as a display area in a department store. To add to the play on words, site and display, Greenbank has staged a coup on the status of the artefact as artefact: ancient, sacred, historical, cultural, and archaeological. For Greenbank's artefacts are utterly, wonderfully and whimsically new. She has created the remnants of a new-old society.

Among the remnants are contorted vases, elaborate neck adornments made from bones and teeth, totem staffs capped with pale pink ceramic stoppers, a coterie of (ceramic) finger tips, pink limbs that could be part-tree, part-human resting on gold-topped faux wood stumps, and one giant tooth and one giant finger tip.

Excluding the bones and teeth, the artefacts are lacquered in a Keith Haring-esque patterning of jagged lines and rough circles. Greenbank's fabrication of artificial culture as fetish offers perhaps an all too accurate portrait of contemporary life, albeit a humorous and engaging one.