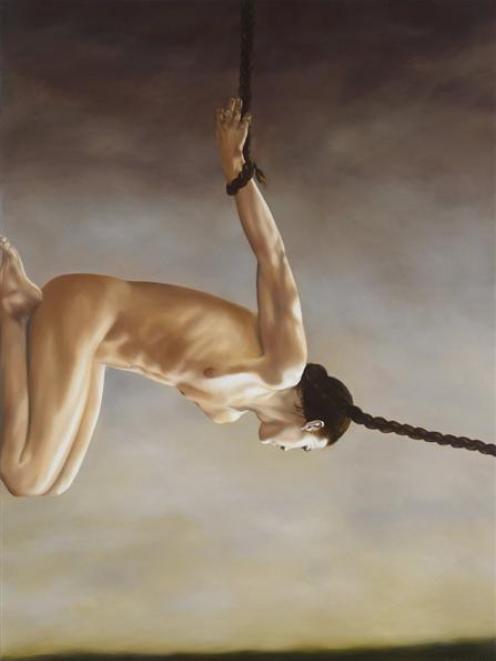 'Neither here nor there' by Anita DeSoto.
James Dignan looks at the latest exhibitions in Dunedin.

Two complementary exhibitions are on show at the Milford Galleries.

Both could loosely be classified under the broad heading of magic realism, using the imagery of dream and antique tones to present real objects as symbol, but at this point any similarity ends.

Anita DeSoto's work evokes the uneasy calm of internal conflict and search for self.

Her large oils use a private symbolism to explore issues of religion and personal seeking.

The images draw heavily from religious art, subverting it while simultaneously raising it to new heights.

There is a seeming paradox of iconoclastic worship of the image, of taking a stylistic base so hackneyed as to be almost kitsch and restoring it to its rightful place at the centre of art.

The art itself is sumptuously painted.

Against misty backgrounds, the figures display a dreamlike eroticism that is simultaneously cool, sacred, and unnervingly transgressive, like some unholy alliance between Bernini and Delvaux.

The images pull no punches, often shocking or bewildering as they enchant.

The artist's use of her medium is matched by her often unpredictable use of the picture area.

In works like the exceptional Neither here nor there, the composition seems to defy logic yet is aesthetically perfect.

The images tell of immigration, meetings of colonists and natives, and of the gathering storm of potential conflict and unease at these meetings.

The works, in muted colours, use exaggerated perspective and depth of field to present seascapes of craft under skies hung with biplanes and giant dragonflies.

In some pieces, traditional and modern craft jostle for attention on crowded waters.

Other images seem trapped in the pregnant calm before the oncoming clash of culture.

In one extraordinary piece, a seaplane looms like a belligerent monster over an approaching royal waka, the tribal chief astride the centre of the canoe.

Ominous swarms of aircraft hang in the mists overhead.

The images are not all that make these pieces stand out.

The subtle washes of antique colour infuse the works with a faded light, and it is surprising to discover that the pieces, with their imitation of watercolour or thinly-washed oil, are in the hard modern medium of acrylic.

Hullabaloo is a collective of artists based in and around Cromwell.

Their talents are now being shown to a Dunedin audience with an exhibition at Bellamys Gallery.

The artists involved in the exhibition have wide-ranging styles and subjects, though many of the pieces are influenced by the artists' Central Otago location.

Perhaps the most instantly eye-catching of the pieces are two charming wood carvings of native birds by Luke Anthony.

Less attention-grabbing, but no less impressive, are many of the other works, among them paintings, prints and photographs.

The photographs are the work of Kay Todd, whose eye for the detail in a larger scene has led to several impressive close-up images of weathered wood and metal.

The combination of calm and strength embodied in these images finds reflection in the paintings of Jillian Porteous and Nigel Wilson, two artists who have tackled semi-abstract landscape in entirely different but similarly effective ways.

A gentler, more expressionistic approach, has been used by Rachel Hirabayashi to produce placid scenes of rural land and animals.