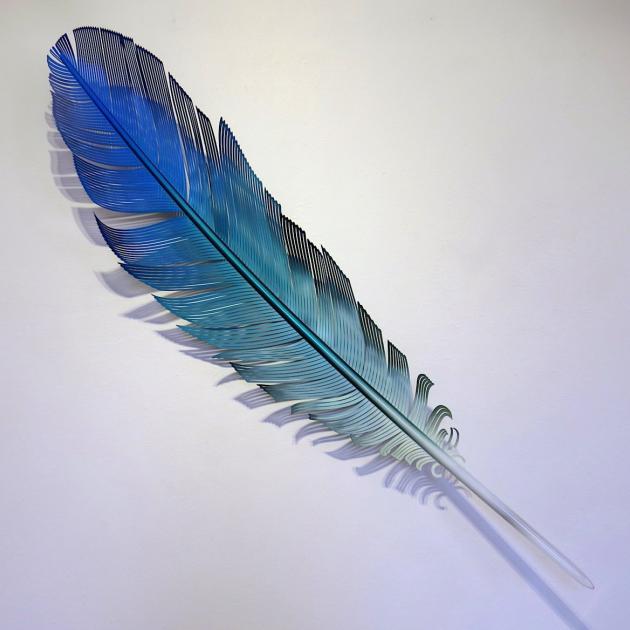 Neil Dawson has long played with the paradox of his solid, heavy sculptures representing the most airy and lightweight of objects. Birds, paper aeroplanes, leaves, and — above all — feathers have been frequent motifs in his metal constructions, both in his large-scale public sculptures, such as the large Chalice in Christchurch’s Cathedral Square and, more recently, in his smaller, more modest domestic-sized works.

It is a display of sculptures in this more intimate scale which currently graces Milford Galleries Dunedin. The works, in acrylic-coated aluminium, are exquisitely detailed replicas of bird feathers. The solidity of the structures is playfully at odds with the delicacy of the subjects, and at the same time is a salute to these wonders of the natural world.

As always with Dawson’s work, there is a thorough understanding and exploration of the play of light on the sculpture. The fine veins of the feathers form moire patterns with the shadows behind the works, shadows which can be seen as part of the works. Although this aspect of Dawson’s skill is partially eclipsed in this display by the beautiful use of colour, it becomes strikingly obvious in the simple, but elegant White Feather, which is a standout piece in this exhibition. 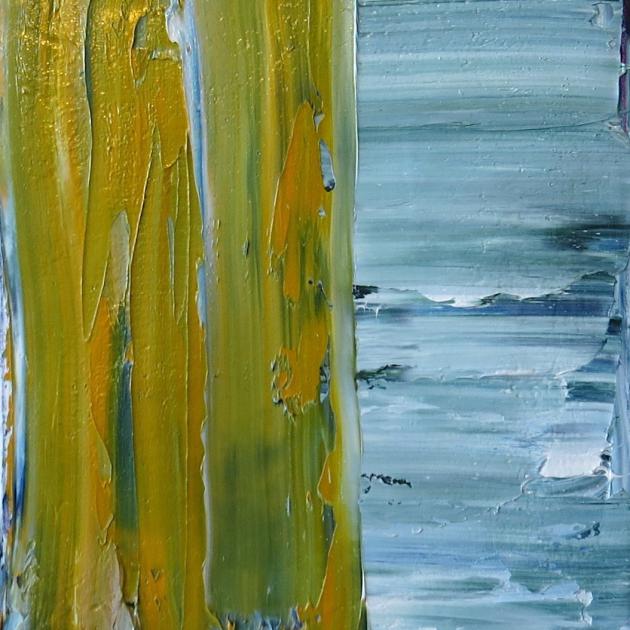 Brett McDowell Gallery is currently displaying work by Michael Harrison and Saskia Leek. Ostensibly two individual exhibitions, the borders between the two blur with the artists displaying work which shares major affinities of form and style.

Harrison’s five paintings run through several of the artist’s recurring symbols and themes: soft-focus figures, stylised cats and hearts, and vague, Woollaston-esque landscapes. Colour use is, paradoxically, both pastel and bold, to the point where Afterlife becomes a study of faint forms against a fierce ochre yellow. Change of Plans, with its two enigmatic figures, one facing the viewer and one with facial details erased, is the most haunting of Harrison’s works on display.

Leek’s work has slowly transformed over the years, to the point where abstraction, or at least semi-abstraction, is now a major feature. In her nine untitled monotypes, also in strong yet pastel colours, concrete symbols and objects are invoked — notably in two still lifes with joyfully simplistic fruit, and other works featuring glowing suns and flowers — but the actual objects are largely left secondary to the effect of the colour, a fact enhanced by the works’ lack of titles. As important as the symbolism of the images is the gloriously painterly texture which has been achieved in these monotypes. 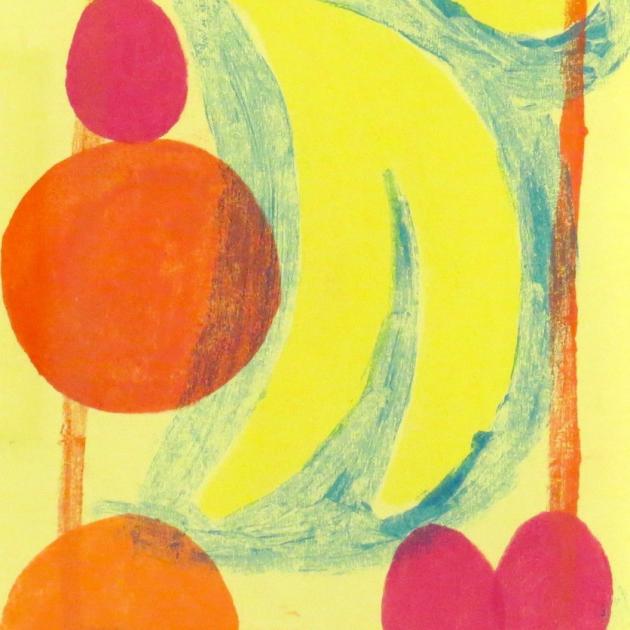 Michael Greaves is another artist whose paintings have slowly moved from figuration towards abstraction, largely as a reflection of the idea that realism, while fine for expressing objects, is a poor choice for expressing more nebulous concepts.

Greaves’ exploration of how abstraction can be used for this deeper purpose has, perhaps not surprisingly, led to a contemplation of how painting can represent the painting process itself, a concept which is only one step removed from infinite regression.

The result of this study has been to produce works where, like spoken words as abstract symbols of thought, colour and texture are used in an attempt to evoke memory and emotion. Simultaneously, the idea of paintings reflecting on the painting process has led to these works being studies of paint and technique. The painted surface is as much the subject as any idea the artist or viewer may read into it. Several works have been deliberately "framed" by the use of bold sweeps of paint around the edge of the canvas to separate the centre from the outside world, yet these impasto stripes themselves break out from the canvas as if trying to invade the gallery space.

The works may not be everyone’s cup of tea, but they are strong, provocative, and pleasing pieces.