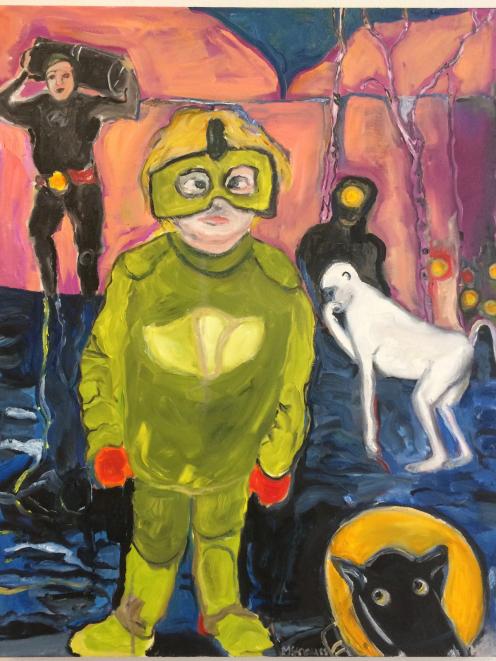 In this body of work Marie Strauss engages the figure of the monkey to explore the human condition and to imagine the emotional world of one of our nearest kin. Her most considered imagining is embodied in a suite of small ceramic works exhibited on plinths running the length of the gallery. In these small, delicate sculptures Strauss has paid careful attention to the facial features and bodily gestures of monkeys, who display a range of emotions, including melancholy.

These interior focused ceramic studies are contrasted with vibrant oil paintings that flank the sculptures. Where the ceramic works are inward-looking the paintings open outwards to the audience. The main protagonist is a young boy who is primarily depicted in aquatic environments; in one painting he holds a bright yellow fish, while a large blue fish nibbles his leg. Despite the dominance of water bodies, Strauss creates unique environments that naturalise the presence of monkeys. In Help is Coming, for example, a boy wearing goggles and a green wetsuit stares googly-eyed out at the viewer surrounded by a black dog with a protective neck guard, a white monkey and two divers. In the worlds that Strauss creates, humans and animals appear to have porous relationships and share space amicably.

While de Chirico is known primarily for his proto-surrealist paintings depicting empty colonnades, fragments of statues and towers in semi-deserted, arid landscapes, Pittendrigh has engaged with de Chirico’s quieter lithographic works. From these, Pittendrigh has selected certain reoccurring motifs, such as a stylised sun and moon, de Chirico’s undulating umbilical cord, and architectural forms, such as neo-classical columns, pediments, and fragments of brickwork. Like de Chirico, Pittendrigh makes frequent use of a thick umbilical cord to reach between realms of the planetary and the terrestrial, between night (moon) and day (sun), between the sublime and the domestic. Pittendrigh’s adaptation of de Chirico’s umbilical cord motif hovers over oceans, snakes through open apertures such as doorways and windows, and yokes fire to the flaming sun.

Nancy, by Sam Hamilton
"Every day for 30 years, Nancy would sit on the street and watch the sunset", Sam Hamilton(DPAG Rear Window)

What would it take to watch the sun set each evening? Sam Hamilton’s film invites viewers to consider this question; one which circles around diurnal and durational time, commitment, connection to the energy house of the earth, and ritual. The "Nancy’ of Hamilton’s title was one such person who undertook the practice of witnessing the sun sink beyond the horizon each evening. For three of her 30 years Hamilton was Nancy’s neighbour in Portland. Hamilton, who was intrigued, asked Nancy if he could film her only to find out that she was moving. Eventually Hamilton decided to replicate Nancy’s daily practice but with four people at the early stages of their lives (as opposed to Nancy). The main directive given by Hamilton to the four teenagers was "no cellphones". Hamilton sat with the teenagers for a while to set the mood then slowly started filming.  The resulting film, which is 11 and a-half minutes long — as a reel of 16mm film — statically captures the four young people sitting on deck chairs looking into the distance beyond the camera. Two of the subjects appear more self-conscious than the other two. Hamilton has resisted editing the soundtrack and all viewers hear is the ambient street sounds of this particular street corner in Portland.