Lockdown and a realisation of the interconnectedness of traditional patterns worldwide have combined to impressive effect in a new exhibition by Peata Larkin in which she explores her identity, whakapapa, and turangawaewae.

Larkin has always experimented heavily with her canvas surfaces. In previous works, she has injected paint through the wide mesh of canvas weave to create dot-pattern paintings, and has also produced pieces which are simultaneously painted canvases and translucent surfaces of light box art. In her latest work, she takes a knife to her surfaces, marking out regular patterns of incisions over strong, painterly monochrome clouds.

Maori art tradition has always been a touchstone in Larkin’s work, with her canvases constantly referencing tukutuku panel patterns. Her latest works are no exception. Inspired in part by patterned cloth found during a trip to Europe, the artist has sensed the parallels between Maori geometries and those in some Mediterranean cultural design, and she has used these cloths as a basis for some of her work.

There is obvious joy in the pieces, despite their seeming meticulous nature. The broad brush stroke has freed up Larkin’s approach, and in some curious way, the use of punctured cloth has moved the work even closer to traditional Maori craft, bringing suggestions of both carving and tattooing to the surfaces. 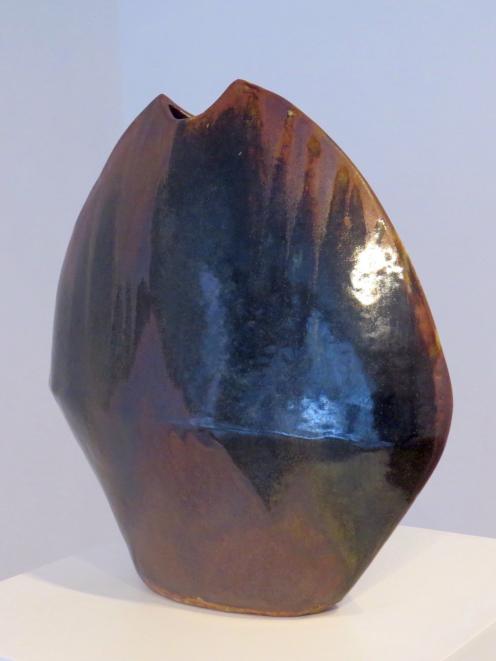 Dame Doreen Blumhardt was an important pioneering New Zealand ceramicist whose own work is today often overshadowed by her work in art education and her legacy as founder of the Blumhardt Foundation for New Zealand decorative arts. It is sadly rare to see an exhibition of her work in Dunedin, something which the current exhibition at Brett McDowell Gallery — coinciding with the 11th anniversary of her death — goes some way to redress.

Blumhardt’s work was strongly influenced by Japanese tradition, but with stylistic features and a quality of workmanship which sets it apart. The current exhibition features eight works, each of them exemplifying her style, and ranging in date from the mid 1960s through to the late 1980s.

Two works stand out as the stars of the exhibition. One, a press-moulded vase, is an elegant piece, its graceful profile perfectly complemented by the use of copper-coloured glaze. The other, the largest piece on display, is a robust and stylish floor pot. The Japanese influence is clear in this piece, and the bold use of colour and glaze gives it the seeming solidity of stone. Other pieces on display include an impressive ash-glazed bowl and a group of charming small vases. 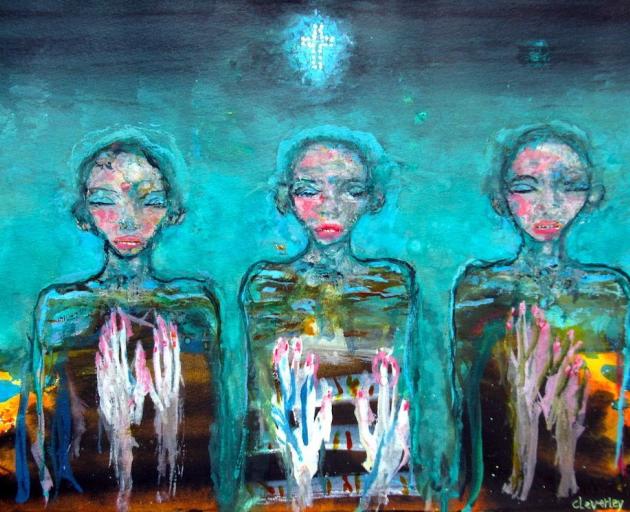 A visit to a Peter Cleverley exhibition is always an immersion into a private exploration of the interconnectedness of the world, presented in a cryptic personal language known to the artist alone.

"Blue Daisy Chain" is no exception. Cleverley’s canvases offer memory traces, fleeting thoughts, links to a place and a time, and mystic indictments of human actions towards fellow humans and the natural world alike. These are sad connections for the most part — a blue daisy chain indeed.

The blue-green palette also reflects Cleverley’s viewpoint, seeing the world from our dots of land at the edge of a wide cyan ocean, and from a land on the "wrong" side of the world. Despite this, many of the images are directly inspired by the artist’s travels, most specifically in Southeast Asia. Most of the works are dominated by the presence of gaunt, ghost-like people — some unnervingly upside-down — and two of the works, Appear and Blue Daisy Chain, cryptically act as near mirror images of each other, one upright and one inverted.

Echoes of earlier New Zealand art appear in Cleverley’s work, most notably the McCahon-like use of the cross as a symbol, not so much of conventional Christianity but of an omnipresent benevolent "otherness", a hope to hold on to in a world gone mad.