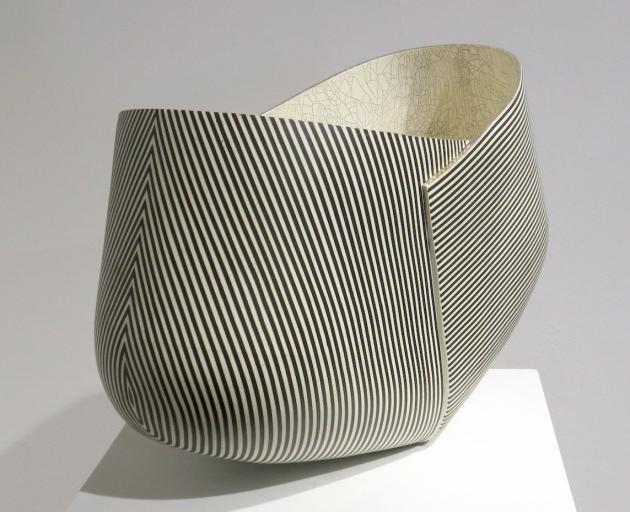 There is a studied playfulness in the optical challenges of Mark Mitchell’s graceful porcelain vessels, currently on display at Milford Gallery.

The bowls appear lightweight, like ceramic vol-au-vent cases, with the sides of the structures appearing almost too delicate to support their expansive, airy volumes. This perception is enhanced by the open forms of the vessels, and also by the expert use of glaze and colour elements. Fragility is emphasised by the masterful use of craquelure, and Mitchell’s pairing of op art patterning and surface texture confounds the mind’s ability to judge the size and strength of the containers. The combination of the aleatory crackled interiors and the hard edged striations of the exteriors adds an attractive tension to works such as Track and Glance.

Mitchell plays with his forms in other ways, notably the distended forms and deliberate irregularity of the openings of the vessels. When paired with the illusory linear patterns of the bowls’ surfaces, works such as Fog and Boundaries IV seem to be in constant flux, shifting and reconfiguring themselves as we watch. The subtle use of colour, both in deep blues and greens and in flashes of Klimt-like metallics, is also beautifully handled. 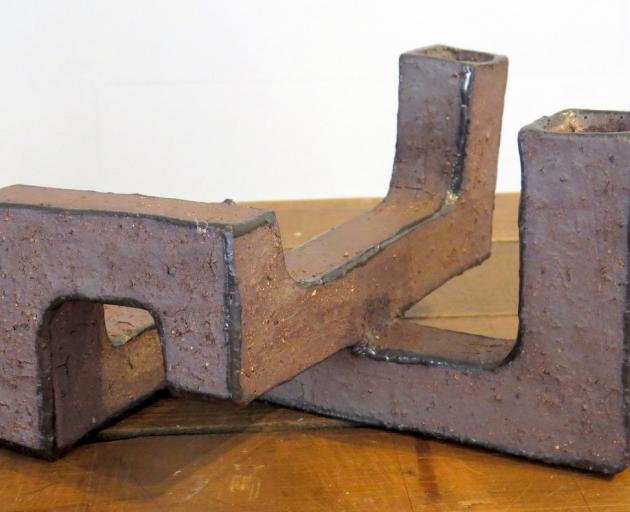 Isobel Thom’s work consists of a series of stoneware candle holders. These pieces are organic, bearing strong markmaking from the ceramicist, and are in the form of two-ended constructivist tubes, each of which is designed to support a single candle. The pieces are utilitarian yet not unattractive, and the use of rich rust-red tones gives the pieces a sturdy, girder-like appearance without detracting from the almost whimsical feel of their convoluted forms.

While Thom’s pieces conjure up thoughts of angular iron bars, Lauren Winstone provides the softer side to the exhibition with a series of small lidded stoneware vessels. There is something calming and almost contemplative about the simplicity of line and colour in these elegant pieces. With shapes reminiscent of Japanese sake bowls, the ceramics are decorated in pale shades, often with subtle craquelure marking. Several of the pieces have been double-fired, adding a slightly richer, earthier tone to the forms. The impression of Japanese influence is further enhanced by the use of twine to connect bowls and lids, which adds an almost zen-like complement to the smoothness of the ceramics. 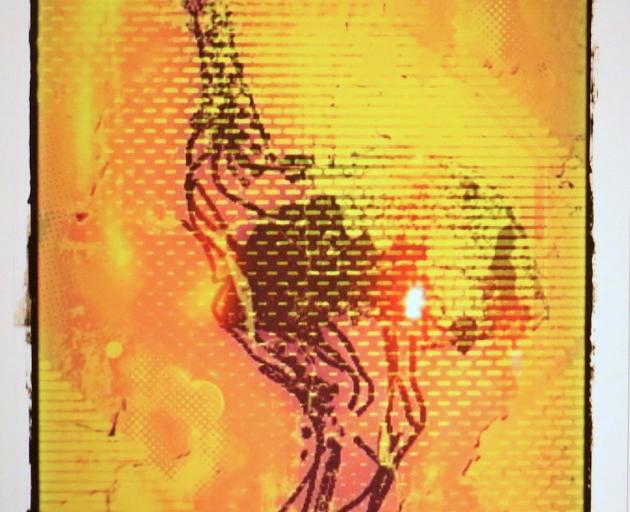 Multimedia artist John Lyall has long had a fascination with moa. The extinct icon is a central feature of his work.

Lyall’s exhibition at Gallery Fe29 explores three aspects of his art: oil stick drawings, contructions from Meccano and found metal, and limited edition digital prints, many of them reworking or renewing earlier artworks.

These latter prints form the bulk of the exhibition. They feature drawings and photographs which have been electronically reprocessed by a series of software manipulations, a process the artist describes as ‘‘regenerative’’ as images are ‘‘tweaked, adjusted, altered, and improved’’. The resulting prints are vivid and dynamic, often bearing only limited resemblance to the original works.

Alongside these prints, Lyall has presented a series of oil stick drawings, in several of which the artist reveals his second repeated motif, mathematical equations and the resulting graphs of their functions. The combination of moa and mathematics makes for some enigmatic images.

The show’s most intriguing items are a series of metal sculptures of moa, created from vintage construction kits. The faded and occasionally rusty Meccano forms are humorous yet poignant, the archaic toy pieces reminding us subtly of the fact that the moa too is no longer anything other than a relic of a long-gone past.