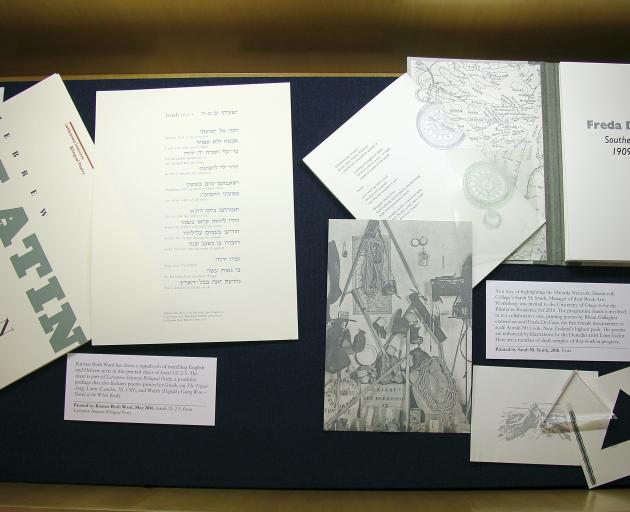 For the last six weeks the University of Otago library and the Otakou Press room have been the creative home of printer Sarah M. Smith, manager of the Dartmouth Book Arts Workshop in New Hampshire.

Smith was invited to be the 2016 Printer in Residence by University of Otago special collections librarian Donald Kerr under the auspices of the Matariki Network, which links like-minded universities across the world.

The Printer in Residence programme at the library's Otakou Press, which encourages collaboration between creative practitioners across disciplines, has this year resulted in an extraordinary book, hand-printed by Smith on a 19th-century press.

Titled Freda Du Faur: Southern Alps 1909-1913, the book is a collection of poetry by Dunedin poet Rhian Gallagher on Freda Du Faur and her ascent of Aoraki-Mt Cook.

Du Faur was the first woman to summit Aoraki-Mt Cook, in December 1910. The third collaborator is Port Chalmers artist Lynn Taylor, who has provided elegant illustrations created by solar printing.

The working processes of the Freda collaborators can be viewed in cabinet 17 in the De Beer Gallery.

For aficionados of hand-printed books, the exhibition of book art by students and artists of the Dartmouth Workshop is a rare treat. 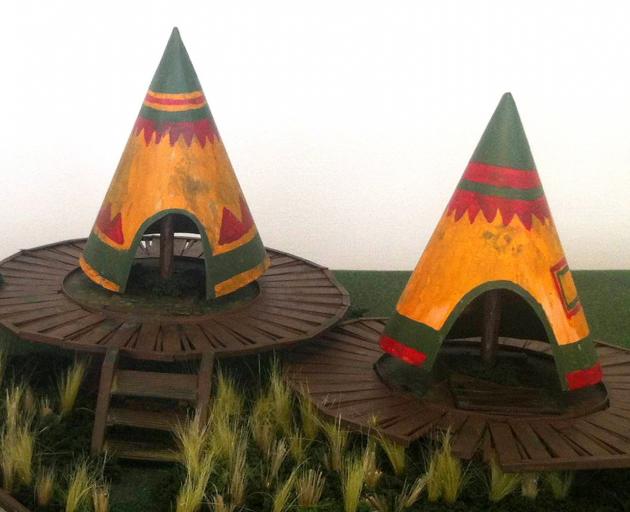 This is the last week to view the surreal collection of miniature artefacts on display in the Rear Window, in Moray Pl, by Wellington artist Mike Heynes.

It is difficult to beat a theme park for an encounter with dislocations of epoch, subject and scale, and Heynes' online discovery of the now abandoned ''New Zealand Farm'' theme park in Hiroshima, provides a standout example of this type of spectacle.

Based on his online discovery, Heynes constructed six miniature artefacts from perspex, epoxy and other modelling materials.

Each artefact, or model, is painstakingly painted to resemble ''the real''. For a New Zealand Farm theme park Heynes' models are not what one would typically, or in fact ever associate with a New Zealand farm.

They include a range of water features (wishing well, fountain with bears, fountain with a monumental pillar topped by Aquarius the water-bearer), an outdoor map under eaves and picnic table, and perhaps most bizarrely, a teepee playground.

I spent 15 minutes watching YouTube clips of the abandoned theme park in Hiroshima, and can attest to the existence of all the models, including the teepees. Heynes' considered selection of structures least likely to be found on a New Zealand farm is witty and playful. 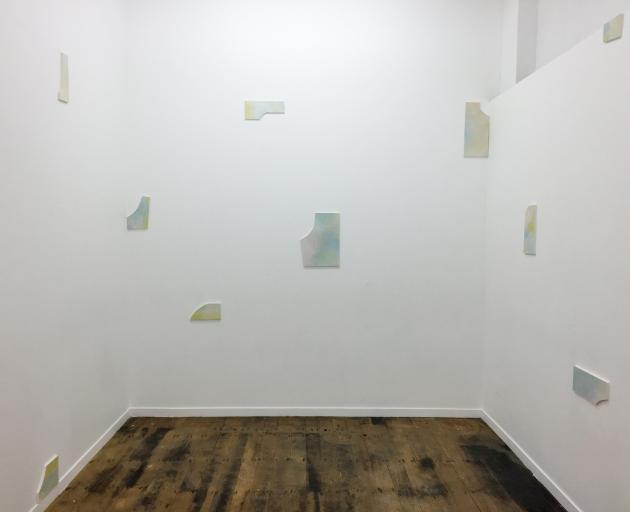 There is an appealingly illusive quality about Auckland-based artist Amy Unkovich's installation at Blue Oyster that begins with the title.

The exhibition includes painted works in a pastel scheme, and four white arches (arranged in pairs) of different sizes, that invite the possibility of looking out on to a pastoral scene.

Of course there is no pastoral scene, as the arches frame only the gallery's white walls. Yet despite the physical impossibility of egress through the arches, they hold an uncanny hint of a world beyond.

Juxtaposed against this abortive egress are the painted works in shades of pale blue, green and pink, reminiscent of home decor and fashion colours of the 1990s: a colour scheme the artist describes as ''pass''.

It is somewhere between the arches-to-nowhere and the retro pastels that the illusive quality emerges and lingers.

Despite the inescapable materiality of the show (plaster and fibreglass arches, painted works on gib), the convergence of these works point, almost unexpectedly, to a virtual world.

The white walls become an ersatz screen for arches that may yet open on to another (virtual) space, with large pastel ''pixels'' variously leaning against walls, installed in neat rows (main gallery), and arranged in a site-specific, fragmentary puzzle (second gallery). Is it real or virtual? Go visit.