It took a lot of hand-sewing and stapling for Poppy George to create her ballgown.

Look closer and you are in for a surprise when you realise the cascading ruffles of the gown are made from dish cloths.

''They were surprisingly easy to work with and cheap - people probably thought I was a weirdo buying up huge packs of cloths at the supermarket or that my house was a mess.''

All up it took two weeks of working nine to 10 hours a day to create the gown which she is displaying on a mannequin.

The mannequin is just one part of George's installation. Another is the shadow boards she has printed with images of domestic life - from hand beaters to cloth face masks and high heels to face cream. 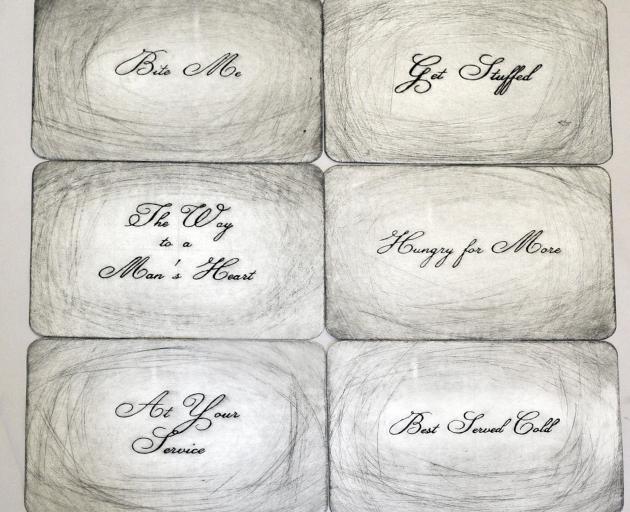 ''It's mostly the idealisation of beauty from a young age. What it means to be successful as a woman. That's what the shadow boards are about. They are the things you use or the processes you go about to reach that standard in order to be seen as successful or valid.

''Although we are in the ''Third Wave of Feminism'', I believe there is much to be improved around the stigma of what is deemed as ''women's work'', and gendered expectations for women.''

The final piece of the installation is a collection of boards which have been created by scratching sayings into placemats and then printing.

''It took a lot of proofs to get the six final ones. It was quite a workout.''

Combined, the three pieces are a commentary on George's coming of age and exposing the stereotypes and behaviours she has experienced throughout her life.

''It's quite a personal topic. I'm 20 now and you start to notice the things you do and why you do them. It's had quite a big impact on how I see myself and how I see the world. I wanted to express that in my work this year.''

The placemats depict how women are taught to express their nurturing characteristics to show they care and how it is manipulated to make women feel obligated to do domestic duties.

''They do all these tasks no matter how they feel about it, they feel obliged. They do not know any other way to express their love for their partner or family.''

The dress, she says, represents a combination of the two topics.

''How there is this cross-section between expecting to reach this standard of beauty while also being available to be the person to clean up after everyone else. Even if you achieve all these standards, they don't exist, they are there to benefit men, expressed through the dishcloths.''

George, who is from Dunedin, says she feels as though she had grown up during her three years at polytechnic and that has emerged in her work.

''I never knew what I wanted to do. Art at school really held my interest. But art school has been an amazing experience.'' 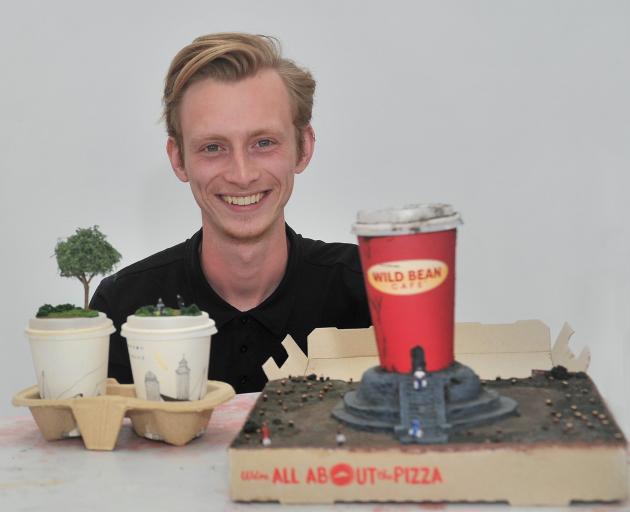 It is a project that took a while for Lyons to get off the ground as he searched for the right format for his ideas.

A tutor suggested going with what he liked to do - create miniature diorama.

Last year, he created two post-apocalyptic dystopian dioramas. This year he thought he would continue to refine the idea.

Conscious of today's consumer culture where so much plastic is thrown away never to be thought of again, Lyons wanted to see if there was still value in the discarded waste. 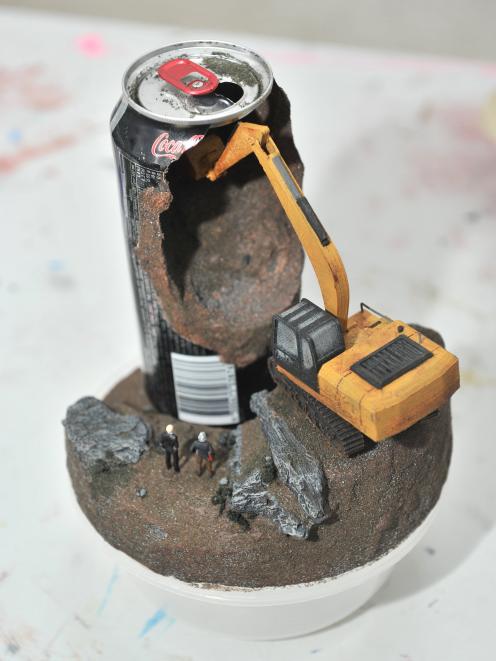 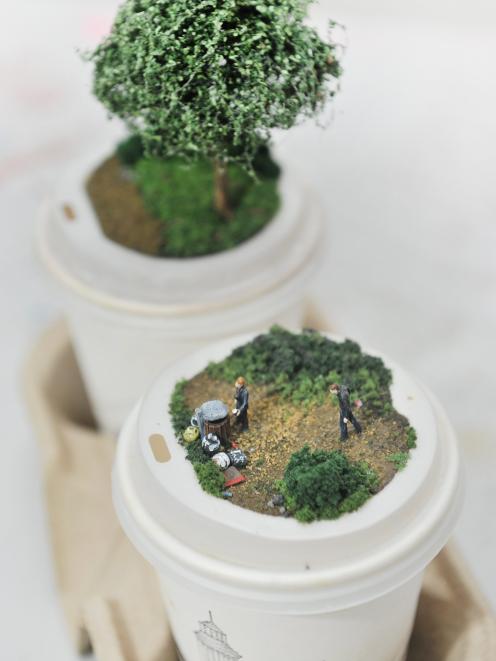 ''I've done some work in retail and it's overloaded with consumerism.''

So he started collecting the non-biodegradable containers he used and began to use them in his diorama.

''I did lots of research and looked at other artists who have used rubbish.'' 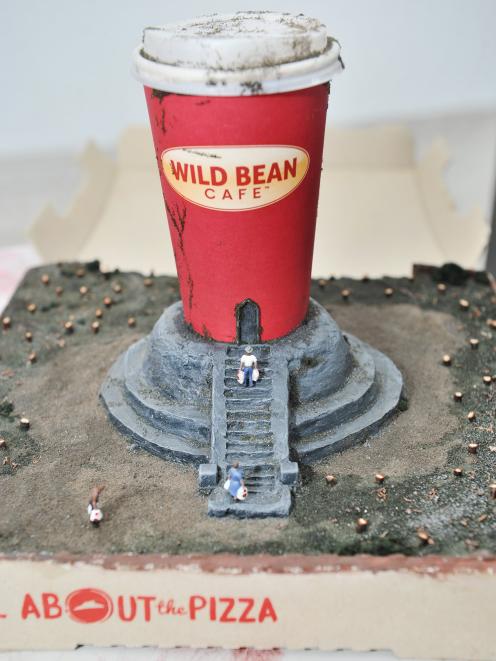 A book he was reading, a novel set in the year 4000, got him thinking about how today's people will be perceived in the future.

He spent hours creating the diorama, painstakingly re-creating the rubbish into what are massive mountains compared to the human figures - in a scale of 1mm to 87mm.

''The figures are railroad miniatures but everything else is sourced, the bases are recycled waste products, the materials I've used like styrofoam is recycled, I've used bark to make rocks, grass from sand and green acrylic paint, trees and twigs from steel wool and sawdust.''

Each of the larger dioramas took five to six hours to make.

''I've gotten better at planning out the first step.''

The Auckland-raised student is following in his father and grandmother's footsteps in completing an arts degree at the Dunedin School of Art.

He plans to complete his honours in sculpture next year and ''see were it takes me''. 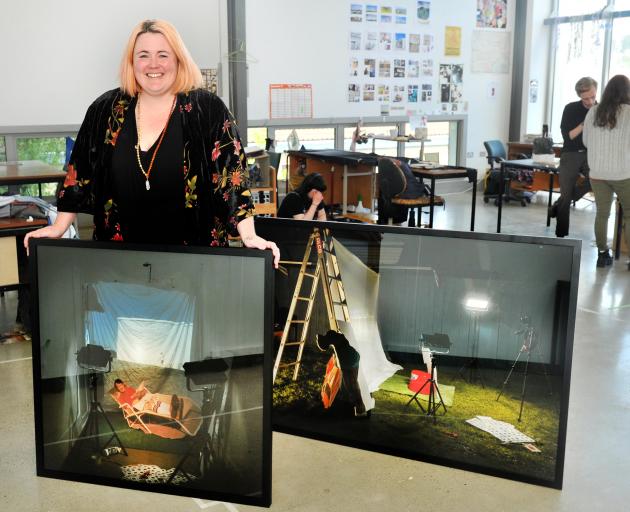 Hannah Craik just had to get a hold of the kodachrome slides that feature in her photography.
Hannah Craik - Photography

Hannah Craik has fallen in love with photography for the second time.

She has returned to study after having children, getting married and falling out of love with photography.

''I had a love/hate relationship with photography for a few years. After my first year I fell out of love, sold off all my equipment, didn't want to have a bar of it. ''

It was having children - son Bodhi is 3, daughter Amelia 2 - that reignited her love for the art form as she started to photograph them.

''I started to think I needed to finish it. There was this pull there, so I came back.''

She is now glad she took a break after her first year of study at Massey University in 2011.

''You become really certain about what you want to do and where your passions are. I have 100% energy and commitment - I'm not planning to leave yet, I'm coming back next year to do honours.''

While a little concerned about going back to study with a young family, she has been able to juggle everything including taking wedding and family photos and teaching a night class.

''It's really chaotic but when you are doing something you are passionate about, it makes up for the chaos.''

Her final project ''Me and Marie'' is a play on how memory sounds and a tribute to her mother Marie.

She bought about 300 Kodachrome slides off eBay which feature family scenes from 1970s America.

While some might see it as ''kind of strange'' people sell off their family photos, they are are a goldmine for an artist, she says.

''When I saw them I thought I need to get those. This project has been a lot about this need to collect.''

Some of the slides have notes or names in tiny writing which has enabled her to identify some of those in the pictures.

''It's a really nice connection to these people from 50 years ago. Now they feel so special and important they're my people. I'm in charge of keeping them safe.''

Given today's digital world there is a flood of images yet the slides evoke a simpler time and a set amount of images to worth with, which works for Craik.

She scanned her chosen slides into a computer and then experimented with them, remaking the image with the help of polystyrene and MDF cutouts and with photocopy paper.

''I created these life-sized people that aren't people and ended up scaring a lot of people.''

Her final exhibition is comprised of two large framed images based on the slides, showing the behind-the-scenes work to create the final images and prints of the ''made'' images.

''There are always little challenges, it was more figuring out what would work. I don't feel like I'm finished yet, so I'll continue exploring it next year.''