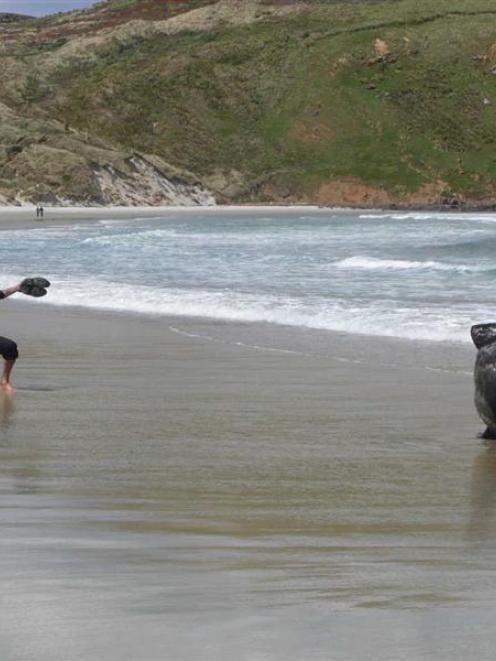 Toni Espanol, of the Camut Band, pretends to bullfight a bull seal at Seal Point on Sunday. Photo by Carmen Aliberch.
The Otago Festival of the Arts is not just proving fun for audiences.

Many of the overseas acts have been enjoying exploring Dunedin during their stay here.

The Camut Band set off down Otago Peninsula after their two performances at the Regent Theatre at the weekend.

Founder Toni Espanol attempted to cross cultural boundaries by pretending to be a matador when a curious bull seal wandered up to check the Spanish visitors out at Seal Point.

"He wasn't brave enough to get as close as the photo makes it look, though," Dunedin Spanish translator Carmen Aliberch chuckled.

The tap dancers took to their heels when the big seal decided it really wanted to play.

The Camut Band left Dunedin for the Adelaide Arts Festival on Sunday.

The Spaniards left plenty of new friends behind after their mesmerising percussion and drums performances in the Regent Theatre.

There was drama of another kind at St Paul's Cathedral yesterday when New Zealand String Quartet viola player Gillian Ansell missed her flight to Dunedin.

Fortunately for all concerned, Ansell made the 1pm concert with minutes to spare.

"I don't know what we would have done," a very relieved festival director Nicholas McBryde sighed afterwards.

The Burns Experience has caught the public imagination, with a large crowd gathering at the Dunedin City Library to hear author O. E. Middleton talk yesterday.

All readings are free and start at midday on the fourth floor of the library.

"Tell the story, tell it true, charm it crazy," Hunt laughs in his inimitable whisky voice.

One of the highlights of the Ballentine's Festival Club in the Dunedin Town Hall will be the appearance of the Calder Prescott Jazz Octet at 10.30 tonight.

Of course, it's obviously not the original Calder Prescott, who started playing in Dunedin jazz bands about the same time Robbie Burns sat down in the Octagon.

Today is the fifth day of the 2008 Otago Festival of the Arts. Just five days to go!

Dunedin's Town Hall clock will be silent for the rest of the week to make sure it does not interfere with the creative activities of the festival.

Dunedin City Council communications co-ordinator Rodney Bryant said the chimes were stopped in time for a recital yesterday to go ahead unhindered by tintinnabulation.

They would be silenced until the end of the festival, and turned back on next Monday.