Phil Brooks with some of her latest works in her studio in Auckland. PHOTO: DESMOND BURDON
Auckland artist Phil Brooks is holding her first solo show in Dunedin this month. She talks to Rebecca Fox about her journey to becoming a potter.

Phil Brooks might have come late to potting, but she sees the past 50-odd years of her life as training to be a potter, not wasted time.

"It’s a really nice way of thinking about it. It’s all been training for this."

"This" is a full-time career as a potter, creating vessels from coils of clay in her studio at her neighbour’s house in West Auckland.

When asked what that "training" involved she says it is a bit of a complicated story.

While Brooks was born in England to a Chinese mother and English father, who met in Canada, the family travelled a lot following her father’s career in advertising.

"He had a taste for travel."

She spent six years in Milan, attending a French school as her father thought their next posting was going to be in Belgium, but instead it was Malaysia.

"French wasn’t much use there, but we’re glad to know it now".

A couple of years later, in the late 1970s, the family moved to Wellington. Next they moved to Auckland where Brooks finished high school and then studied languages at Auckland University.

After a couple of years work, she applied for and received a scholarship to study at the Chelsea School of Art in London.

A lack of jobs in the early ’90s in London led her to try her luck in America, but after a short time she returned to New Zealand, where she carved out a career in architecture and interiors.

She opened her own interiors firm in early 2000s and spent the next 13 or so years working on a variety of projects, including the Auckland Town Hall and the Civic — they were "really fantastic projects, which I much enjoyed".

But the urge to create her own work never faded. 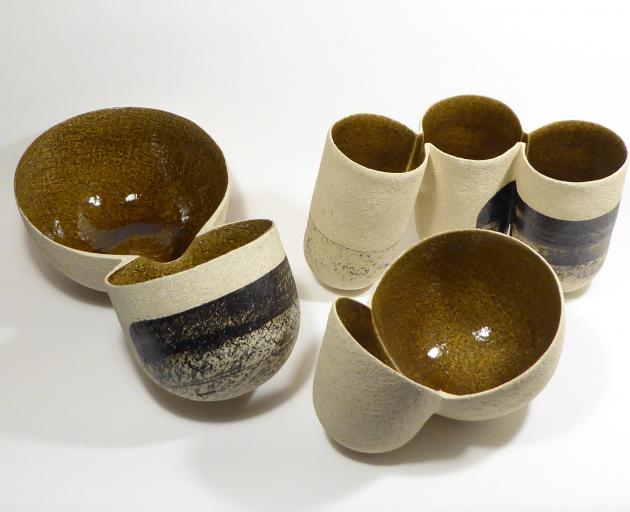 Some of Phil Brooks’ latest works. 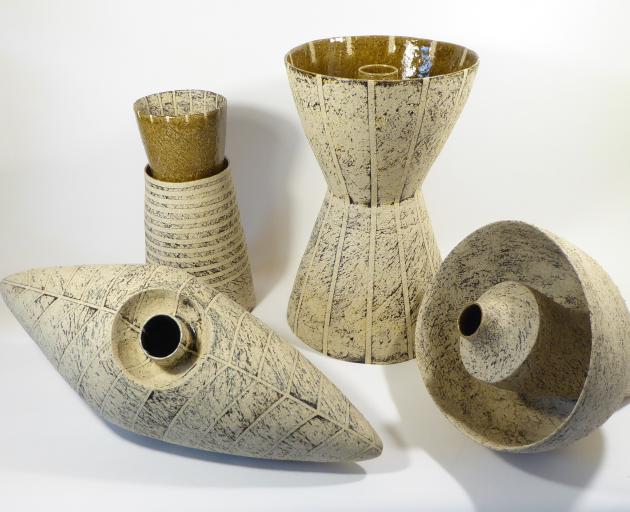 "My sister is a talented artist and my father a graphic artist and drawer. It has always been there but I think because my sister was so fantastic at it I took a different route for a while."

She eventually realised she had had enough of retail design and wanted to do something different, so attended night classes in ceramics and completed a diploma in ceramic arts at Otago Polytechnic in 2016-17.

"I’d spent so many years drawing something for other people, I drew with pen and paper. You really find how restricted you are with that. You’re going to have to draw right angles, put a whole lot of dimensions on it, give to someone who is going to make it for you. They’re never going to make it exactly how you really imagined it.

"I think the real joy I have now is I can make up my mind along the way and I can make these organic shapes."

With ceramics, Brooks gets to indulge that passion for organic shapes and vessels — things she could not draw before.

"I was really happy to close the doors on my interior design business and try my best at this one thing; to not just take on jobs to pay the bills."

She found the coiling method of potting, which involves manipulating sausages of clay and merging them together, allowed her to create organic shapes.

"It’s a very robust technique and if it start to fall apart, you can chop and change, reinvent and reconnect it. It’s quite forgiving.

"There are so many fantastic throwers out there, they’d put me to shame. Coiling is much more my thing."

Brooks starts with a vessel shape that would be familiar to anyone and then manipulates it so it goes from being functional to sculptural.

"They refer back to the original form people feel comfortable with. They become something extra-ordinary or, hopefully, poetic or evocative. There is room to interpret them in more than one way."

She likes to explore the space inside a pot, which she thinks is a result of her background in interiors and architecture.

"It think that is why I find it very exciting. When I’m making things when something goes wrong, I can alter it. It’s an exploration of a space of a vessel and its relationship with the skin.

"A lot of ceramics is about just the form, the skin itself and not so much about space: the inside and outside, the skin and volume."

The inside of her pots are often glazed in strong colours, such as black, to contrast the cream outside. She keeps her palate in neutral colours, so it is clear what she is trying to do.

"Decoration is an important part of ceramics, and I like that I can use that in a way to underline the point I’m trying to make between the outside and inside.

"The contrast between matt and gloss as well as colour and neutrality, is just another tool in refining the idea."

Two years ago, she held her first solo exhibition — "Pots I Couldn’t Draw" — which helped her get her works viewed by galleries. She also decided to go by Phil rather than Phillippa Brooks.

"I liked the ambiguity of Phil. It’s amazing how many people automatically think Phil is a male."

Brooks also entered her work in the Portage Ceramics Awards in 2017 and 2018, making the finals both years. It is through those awards that Milford Galleries’ Stephen Higginson saw her work.

Brooks enjoys voluptuous and sensual shapes, which is reflected in the works exhibited at Milford.

"They’re ones I could never draw before. Now I’m getting my fill on curves and organic shapes, but keeping precision with it ... you’ve got to have those crisp edges so they don’t just become a series of blobs."

In her previous career, she worked with more than 10 people in a studio, now she works from her neighbour’s studio by herself.

"I’m not a person who likes to share. I’m quite private when it comes to my work. I like to work on my own. There wasn’t the same need for private creative space."

She tries to keep regular working hours and finds she feels better and more motivated at the end of the day if she has been disciplined in her work.

"One things leads to another. You get on a roll and you want to be there all the time."

The closeness of the studio — it’s a 50m commute — means she can pop over and check her work as well as being far enough way not to be distracted by things at home.

"I’d find it really hard if my studio wasn’t close to home."

She has an electric kiln which, unfortunately, died while she was finishing the last works for the exhibition.

"The last half hour of the last firing was torture. I knew I had this huge amount of work in there. I used to cry when things went wrong, but now I just go ‘uhh, I’ve learnt something’.

"It’s all sorted now and I’ve learnt more about how a kiln works than I ever wanted to know. It was just the worst possible moment."

Finishing the works and packing them up was an emotional time.

"You’ve lived with them for months. Each one is quite different, they’re the same but different and you get quite attached to them. It’s hard to part with them. I feel quite a wrench."