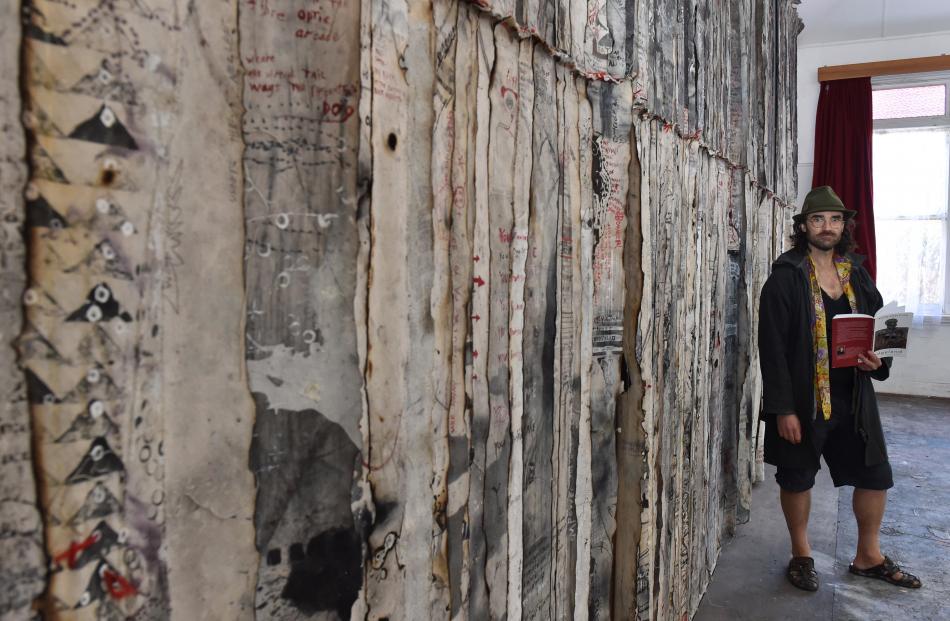 James Robinson still cannot get used to seeing his large mural featuring words by David Eggleton hanging in his home studio. Photo: Gregor Richardson
James Robinson is taking a big step in opening his own home for the public to view his latest work honouring friend and colleague David Eggleton. Robinson tells Rebecca Fox about poetry and painting.

A public show in a personal space. Port Chalmers artist James Robinson likes the sound of that.

So much so he is opening his home this month so people can view his work, in particular the large - 8m by 3.5m - Edgeland Teleprompter Incantation, made as a tribute to poet David Eggleton for being awarded New Zealand Poet Laureate.

''I've never been able to fill the wall to capacity before - it's been a personal challenge,'' he says of his large home studio in a former community building.

The pair have influenced each other's work before - Eggleton wrote a series of sonnets Anthropocene and Asylum in 2003 in response to a series of works created by Robinson while on an Australian residency and Robinson's work has featured in Eggleton's books.

Back then, Eggleton in the New Zealand Listener, described Robinson's work as ''beautiful, harsh and weirdly heroic ... Scorched, soaked and scavenged''.

''Robinson's paintings are a testimony to modern life as a chapter of accidents, where menace mingles with grief, and aggression with abjection.''

But Eggleton says this latest work by Robinson is ''another level again''.

''I'm aware of what he is capable of doing but this has blown me away,'' he said on seeing the work for the first time recently.

The work evokes ''this amazing palisade''.

''To me it's a rampart or a forest, maybe in a bush fire context, and scorched earth wasteland - all these ideas run through this very beautiful panorama behind me which I'm amazed at. I'm really fascinated with what he's managed to do with my words.

''He's managed to turn them into generating points for his own inspirations, obsessions and concerns.''

The work is named for Eggleton's poem Teleprompter in which he sees himself as channelling the voices around the time of the millennium and book of poetry Edgeland.

For Robinson, a Dunedin School of Art graduate and Paramount Winner of the Wallace Art Awards in 2007, it was ''pleasurable and easy'' to marry Eggleton's words with his work.

''The text is very image dense and mirrors and reflects a lot of my content naturally. He doesn't hold back so I didn't hold back.''

He was aware of the ''poet and painter'' tradition in Dunedin but decided to ''own it''.

Edgeland is made up of eight panels of loose canvas each of which has been worked on individually. Each panel is made up of ''fragmented slivers'' of canvas that have been glued and sewn together.

It echoes his work In and Out, which won the 2019 Parkin Drawing Prize People's Choice Award.

Having the mural hanging in his own space has been quite surreal for the artist.

''It's very strange living with your own stuff.''

It is the first time he has opened his space to the public and believes it is perfect for such a venture given the hall-like size of his studio.

''I'm not expecting hordes, just a moment of honest exchange. You become quite introverted, go down the rabbit hole as a painter.''

Robinson, who has held residencies around the world including the Sarjeant (Wanganui), the McCahon Trust (Auckland) as well as the William Hodges in Southland and others in New York and Berlin, has carefully curated his works, hanging not only some of the Australian works which have not been exhibited in Dunedin before, but some of his other paper pieces in files.

''I'm really looking forward to it.''

The exhibition may also mark a milestone in his practice. 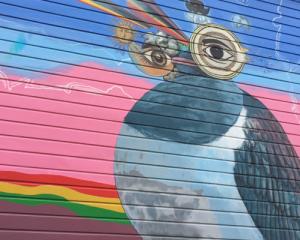 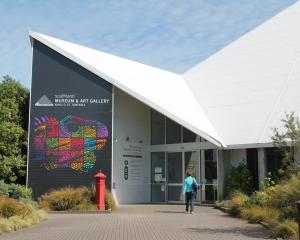