A journey in time and taste 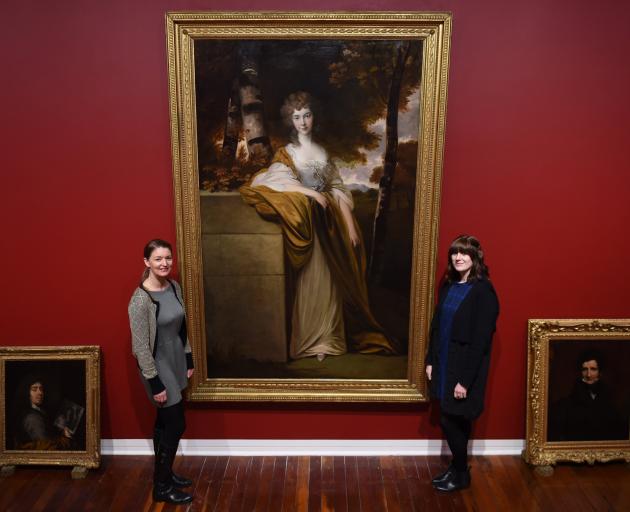 Dunedin Public Art Gallery curators Lucy Hammonds and Lauren Gutsell pictured with one of the large works being set up for ‘‘Style and Substance: A journey through the collection’’. Photo: Gregor Richardson
The system of dividing art into different genres has been used by Dunedin Public Art Gallery curators to showcase some of the gallery’s collection. Lucy Hammonds and Laura Gutsell tell Rebecca Fox about digging deep into the collection.

From a huge Sir Frank Brangwyn mural to a drawing by an unknown artist of a bird embellished with feathers - a look into the Dunedin Public Art Gallery's collection uncovers the recognised and the not so.

Gallery curators Lucy Hammonds and Laura Gutsell recently dived into the collection with the goal of finding works that fit into the established artistic genre system of categorising works of art by subject and the concept of the historical genre, which has its own hierarchy.

''In other, previous, exhibitions we've taken quite a wide historic arc through the collection ... in this exhibition we've looked a little bit more in focus at the historical collections and particularly at subject matter of artworks,'' Hammonds says.

They had the ground-floor gallery to redesign so chose six - history, portraiture, genre, landscape, still life and animal painting - to show how those genres, established in the 17 century, are represented in the gallery's collections.

''The title [''Style and Substance''] is a play on that, the content of the art works. There are certain areas where our collection is stronger and so that has affected the weighting of particular parts of the exhibition.''

The Harbour, Naples c.18th century, by Thomas Patch. Photo: DPAG Collection
Each room in the gallery will be focused on a particular genre, starting with history and finishing with animals, and feature mostly paintings and works on paper with some decorative arts.

Gutsell says the works try to contextualise each genre over time but also try to directly talk about the works in the collection.

''It is art historical in its focus, so is very much anchored here in the works we have in our collection.

''People can expect to see lots of large canvases and gold frames; it will feel quite historic. We've done a full paint-out of the gallery in rich, beautiful colours.''

The hierarchy, or measure of what was considered the ''most prestigious genre'', was judged on whether or not it contained human subject matter.

''That put history painting and portraiture at the top of the hierarchy. Genre painting sits somewhere in the middle, because it is a unique blend of experience and action, but does include human subject matter through those scenes drawn from daily life. Then the landscapes and still life that don't include human subject matter were deemed to be at the bottom of that hierarchy.''

The show attempts to look at how those things changed over time as landscape painting had a big surge and became a really prominent art form later on.

''Each genre at different points in time did that. Approaches to them and how they were used changed.

''They had different characters.''

Hammonds says the early traditional hierarchical systems of structuring different types of art are talked about in the exhibition.

''In regards to still life painting, despite officially being a lower genre in terms of prestige, it is very important area; it creates an important space for lots of women artists who are in our collection.

''We can look at what that genre offered at certain points in time. The similar narrative applies in a different way to landscape with men. Suddenly the landscape had a rising level of interest in terms of what people were looking for in their collections.''

In the exhibition's landscape section there is more content related to New Zealand and, in particular, Dunedin.

''We've been able to bring together some really beautiful landscapes of the Otago region from the collection.''

''There will be over 100 works. There is really rich selection of works from the collection and it does draw more from the known and well-loved works, along with works that haven't been out recently.''

The curators have tried to get a mix of works that are visitor favourites, such as the Monet and the Tissot and one of the gallery's huge Brangwyn murals, alongside things that have not been on a display in a long time and that people might never have seen.

''Especially in the animal room I think there will be some surprises and some works we haven't seen framed before either, which is really nice,'' Gutsell says.

Hammonds says they have also made an effort to bring together groups of works on paper.

''Obviously there are reasons they don't come out as often, as they are vulnerable to light exposure. But it's given us the ability to bring together some very beautiful watercolours in still lifes, and in animal paintings there are lovely groups of works on paper by New Zealand artists and international artists, which is exciting.''

The date range of the show spans some of the earlier works in the collection. Some of the religious works date from the 15th to the 17th centuries, but the bulk of the works go up to the 20th century.

''The emphasis is quite an art historical exhibition.''

To see
‘‘Style and Substance: A journey through the collection’’, Dunedin Public Art Gallery, opening July 6. Tour: Curators Lucy Hammonds and Lauren Gutsell take a tour through the exhibition on July 6 at 11am.