The Rock and Pillar Range, near Middlemarch. Photo: Gerard O'Brien
Swamped by the high quality of entries for the 2018 Landfall Essay Competition, editor Emma Neale struggled to reduce a shortlist of 21 essays to just 10. That’s when Rachel Scott, co-publisher at Otago University Press, suggested Strong Words,  a collection of the 21 essays that Neale believed were worthy of sharing with the world. Here is Dunedin artist and writer Madeleine Child’s offering, ‘‘Loess’’.

If you were to fly like a crow from Dunedin to Wanaka you would pass over a brown lumpy landscape before you reached the mountainous mountains and the lakes of Central Otago proper. This is a block and basin, or basin and range, or horst and something landscape. The ranges, blocks, horsts are clearly defined raised heaps caused by geological uplift and tilted so that one face is steep and the other gentle. Over millennia the basins in between have filled up with all the stuff basins fill up with, and erosion has exposed the schist into a fretted landscape with great jutting tors. It has the most extreme climate in New Zealand - parched hot in summer and sub-zero in winter.

Some think these exposed flat-topped blocks - the Rock and Pillar, Rough Ridge, Lammerlaws, Lammermoors, Hawkduns - are only good for farming wind. The Rock and Pillar is especially remarkable for the forcefulness and abundance of its wind. It is a womb of wind and cloud and begets its own particular lenticular cloud formation, "The Taieri Pet", which can loom large overhead like a great Aeolian spaceship.

Everything is blown, and every dip and gap and crevice is filled with loess, a wind-blown mix of fine silt and clay and ash, blasted into the cracks in the tors, whisked into the gullies, swamped in the bogs, and becoming ground for plants to take root and insects to make burrows.

The wind strikes the high schist tors, funnelling around at an increased speed so that in winter, snow is blown away from them rather than built up, leaving around the base of every tor a wide scoured-out area. In this wind desert zone the vegetable sheep clump together on an underlay of dead matter, their hairy leaves catching fog droplets. The stunted shrubs are leaf lop-sided, their windblown side unable to grow leaves, and if there is ever a breach in the ramparts and the wind penetrates to the heart, they are doomed.

Insects have stopped bothering to fly, or fly very far. They skip about, short-winged or wingless. Others creep under rocks, hide in bogs, burrow down.

Up here the weather can change in seconds. From out of nowhere great clouds gather, fog thickens, hurricane winds whip, temperatures plummet. It is a place where one can easily lose one's bearings.

In the 1940s an attempt was made to harness the slopes into a major ski resort. In a postwar project of great fervour, vision and voluntary labour, three lodges were built near the summit, including Big Hut with bunks for seventy. For some years it was used by plucky parties of downhillers and langlaufers, but by 1954 the heyday was over, the wind had won, and the huts fell into disuse and disrepair. One disappeared. And apart from the odd scientist gauging water on tussock or catching daylight moths, for the next fourteen years this great heap of schist was pretty much left to its windy self.

Until my father came along and made it his ruling passion. For what seemed like every weekend he left home and disappeared up the Rock and Pillar. He sometimes took my tweenage brother, and occasionally some other unsuspecting soul, but mostly he was on his own.

Up and down he went. Up the fenceline to the massive tors, down the slippery snow tussock. Up to the vistas at the summit plateau, down to the paddocks in the valley below; up to the alpine tarns, down to the peaty river; up to the gale, down to the stiff breeze. Lugging his pack. Once he watched as it rolled a thousand metres back down.

He'd arrive back Sunday evenings, late, cold, stiff - and nearly always with horrible tales of weather, accidents, ill-equippedness. Our low-level worry became inflamed when he was overdue, but otherwise we didn't take too much notice. He'd muck-spread about the bags of collected specimens for sorting; the airing cupboard filled up with mosses and liverworts; things were pinned, mounted, boxed, shelved. He'd lose himself peering down a microscope, drawing, identifying by mandible or capsule, fathoming what were often freaks of nature.

Come Saturday he sets off again, fossicking about, scrambling across to a different ridge, glissading down a slope, getting caught in fog. He commandeers Big Hut, once he finds it. The chimneys are broken, one corner has slumped, some asbestos sheeting is disintegrating and the ingenious complicated plumbing system has died. But he does a few quick repairs, lugs in some diesel he finds outside, drip-feeds it through the ceiling and gets the old stove going. He shovels out the snowmen that have drifted inside and sets up the ping-pong tables. He sticks his name on all the top lockers, throws some lumpy mattresses over the odd wooden chair-frames, cranks up the gramophone and puts on Dinah Shore: `Skylark'.

When he loses a crucial bit of his burner and has to make a fire, he burns the wooden scraps of old ski tow and other stuff lying about that doesn't look important. He forgets essentials - matches, food, pieces of equipment. He notices the skies closing in but ignores it just a bit too long. He takes long shortcuts. He loses stuff: the Pentax, the Nikon, his brother in the fog one night. He can't resist wandering off at dark to see what emerges, what nocturnal creatures survive the relentless tugging and tearing of the mountain winds. Numerous cockroaches, large slugs and the handsome mountain rock weta are out grazing on the lichen fields.

He swoops around with a net. He sets stations of pitfall traps - Gregg's coffee jars filled with diluted formalin with a dash of detergent, buried up to the brim and protected against rain and snow and direct sunshine by pieces of schist, wedged firmly in the form of a gable. He catches a spectacular bright green wingless stonefly: Stenoperla prasine. He finds some tiny short-winged and wingless insects, and discovers two new species of caddisfly which someone names after him - something or other childi. Pairs of pipits and dotterels doggedly try to decoy him away, doing that broken-wing thing. Skylarks hover in the foehn winds, inexhaustibly trilling.

He keeps diaries, journals, notes, records; he draws his own maps, makes up toponyms. He sketches out the bogs and flushes, the humps and hollows, and adds in the plants and insects. He paints the landscape in watercolours, all brown and beige. The wind eludes capture. But the journals are full of it: `Suddenly much darker - dense cumulus cloud blotting out the sun and wind blowing in violent gusts - abandoned investigations' or `impossible to breathe in strong wind - very disconcerting'. `Wind blowing at violent persistent fury - crawled to hut.' `Blowing a gale at the top and bitterly cold. No sign of life - not a lark or an insect dares to emerge in this.'

I am off. I will search for Periwinkla childi larvae in the waterfall halfway down Snake Gully. I will fossick about in the tarns and turn over rocks looking for the slightly curved horn-shaped cases. 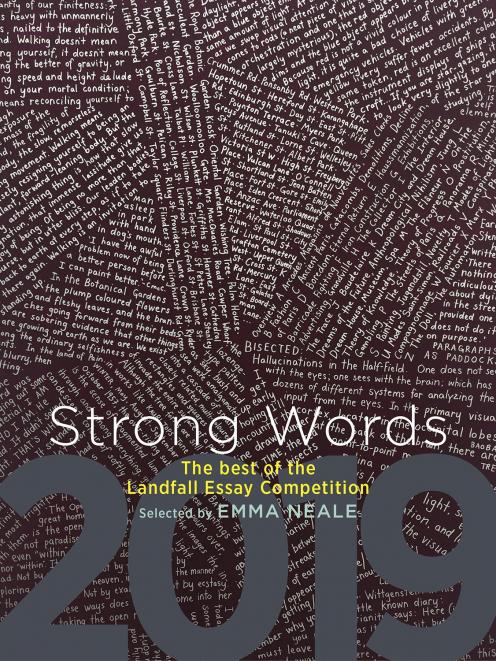 Strong Words: The best of the Landfall Essay Competition, selected by Emma Neale, is published by Otago University Press and out now.
I will trample over the Celmisia and breathe in the scented leaves. I will hunt out the carnivorous sundew patch, and the bright red orange drupes of Coprosma pumila. I will look for the Dracophyllum with its leafless windward side and the small blue and white grass lilies. I will sit on a dense sward of snowbank plants, listen out for larks, chew on bog pine. I will marvel at the robust Umbilicaria lichen attached to the schist by strong cords.

I will stop on the wide slump of earth interrupting Deep Gully and forcing the stream to go underground, and watch the awkward craneflies blunder about in a jungle of vegetation with their long legs trailing. I will poke under rocks for mountain weta, frozen solid but still alive.

I will find the small pond below Stonehenge with its fringing of cushion plants, and look for the intricately intertwined Gordian worms and caddis larvae. I will seep into bog, be flushed by wind.

I am ready to be delighted by the sight of a fruitfly on a snow patch.

And maybe something will rouse my memory of the one time we did all go, but truly, sadly, oddly, I have scant recollection of it. We must have all traipsed up, looking for a good spot - our father collected into a heavy-duty plastic bag inside a labelled box. But where did we agree, `This will do'?

I only remember the mad confused gusts of wind. And the ash on our clothes, in our hair.