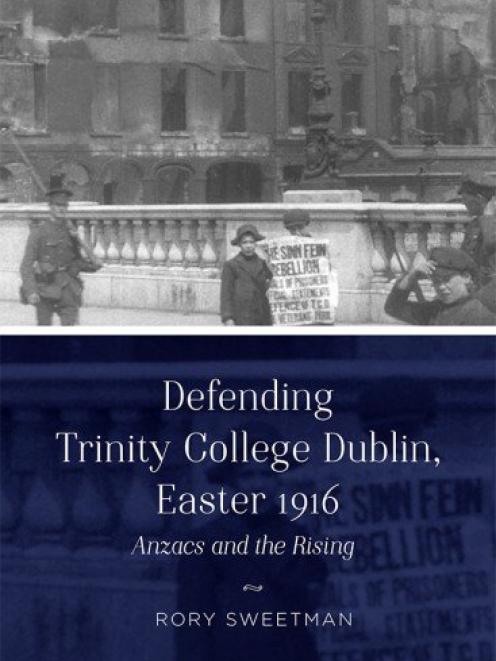 Irish-born, New Zealand-educated historian Rory Sweetman is no stranger to local readers. He developed the modern Irish history programme at the University of Otago during 1997-2003 and his 1997 book on the sedition trial of Auckland’s Bishop James Liston won the Sir Keith Sinclair Prize for History. In 2013, his history of Otago Boys’ High School was delayed while the author and the school argued the toss about including some skeletons in the cupboard concerning two former rectors.

His latest book confirms the value of having historians with a foot in more than one camp. His dual heritage led him to explore a Kiwi connection with the 1916 Easter Rising in Dublin which had been ignored or mentioned only briefly, the Kiwis involved usually being dismissed as "Australians".

The book provides a setting for the events of Easter 1916 with background on the Irish independence movement at the time, the part that the Trinity College complex might or might not play in a military situation, and just how a group of New Zealand soldiers came to be there at all.

Alexander Don (son of the missionary to the Chinese on the Otago goldfields), John Garland, Frederick Hobbs, Finlay McLeod, Frederick Nevin and Edward Waring were soldiers on leave in Dublin during the Rising and one Australian, Michael McHugh, got caught up with them. Sweetman is generous to Australia in calling the group "Anzacs", especially as a recent film called Anzacs and the Easter Rising focuses almost entirely on the contribution of the Aussie, McHugh.

How the New Zealanders reacted to being caught up in the crossfire allows Sweetman to explore the confusing situation they encountered. Although being fired on by Irishmen was not their expectation when they signed up, as uniformed soldiers they were a target for the rebels. When finding sanctuary in the fortress-like college, their battle experience at Gallipoli propelled them into contributing rather more leadership than the college’s Officer Training Corps, usually lauded as the saviour of Trinity.

Although the men spoke little of their experience in later life, apart from headmaster Don who shared his wartime stories with his pupils at Hadlow Preparatory School in Masterton, an extensive appendix reproduces letters to the World War 1 New Zealand newspapers. Here we get a New Zealand view of events, usually covered elsewhere with no mention of this country.

The story is a gripping one, well told, and able to be read in a sitting. There is admiration for the author’s decision to tell a "local" story set in a distant place. Perhaps, above all, we are reminded that in history New Zealanders constantly pop up in the most unexpected places.