People and animals caught in system 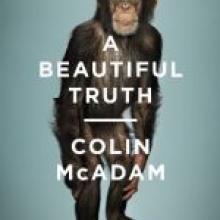 A Beautiful Truth<br><b>Colin McAdam</b><br><i>Granta</i>
The human tendency (or need?) to attribute animals with human thoughts and feelings has probably been with us since the first domestications of farm animals and hunting companions, if not before.

Author Colin McAdam, in this story of the adoption by a childless couple of a baby chimpanzee and his later life, explores this frequently fraught area.

At first, McAdam's style of alternating between the couple, the baby chimp and a group of chimps in a research facility and their carer is rather startling. But it is used with skill and the interactions are engrossing, seen from both sides.

At first, and for several years, the raising of the baby, Louee, is held within the couple's need and their capacity for love and empathy with each other and their strange but intelligent, quick-witted and frequently funny child.

But adult chimps have enormous strength, and eventually there is a disaster, and Louee is removed to the research facility.

The story takes an increasingly problematic line from here, and many humans do not emerge well from the telling.

Chimpanzees are used for the testing of drugs against human disease, and the deeper themes of the book become apparent.

This is not, however, a rant, but a tender exploration of the people and animals caught in a system where distance allows abuse, and empathy is redeeming.

It is not a sentimental book, but challenging and enlivening. I enjoyed it.

Margaret Bannister is a retired Dunedin psychotherapist and science teacher.