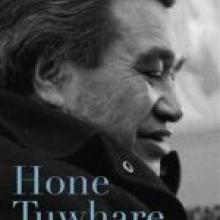 SMALL HOLES IN THE SILENCE<br>COLLECTED WORKS<br><b>Hone Tuwhare</b><br><i>Godwit</i>
National Poetry Day was on July 22. It may have passed into silence.

Alice Te Punga Somerville introduced a lecture on Hone Tuwhare's Rain and the "shapes of silences in a poem" with an unexpected recording: "I started the lecture with a 20-second recording that's included on a PM Dawn CD: the clip sounds like silence, and students chatter away waiting for the 'thing I'm going to play them' to begin.

Second time, they listen and find it's silence. Third time, they strain and start to hear things. Before the fourth time, I explain that the recording is indeed silence: but it's silence recorded at the graveside of Dr Martin Luther King Jnr.

Hone Tuwhare's new collected works is called Small Holes in the Silence. He believed that poetry is art that not only lives on the page but also in the voice, breath and very being of the writer and the reader.

Few New Zealand poets have matched Tuwhare's popularity. Back in 1964 he released his stunning debut collection No Ordinary Sun. Seven hundred copies were sold out in 10 days. It went on to have 13 reprints.

This first collection established his voice as Tuwhare went on to produce poems about working people, the land, the call for justice, lovers, laughter, food, death and sorrow. He released 13 collections of poems, all included in Small Holes.

Tuwhare talked of how his poems have a "jump" rhythm, like when men do a haka, a beat which is sort of a delayed beat - a bit of syncopation.

Tuwhare had that voice which sounded like he was in the church and in the pub at the same time. He knew how to produce a formal oratorical "biblical" voice as well as a real searing, slangy street-level voice.

Not bad for a boilermaker from Kaikohe, who won two Montana New Zealand Book Awards, held two honorary doctorates in literature and was a Te Mata Poet Laureate.

In the same week New Zealand mourned the death of Sir Edmund Hillary, Hone died, too. He spent his last years at Kaka Point, where he produced his last four collections.

Tuwhare lives on in his poems. We, who live in darkness, Dear cousin, Deep river talk, To safe harbour & estuary come and I feel like a vulnerable pa-site are all here naturally.

Tuwhare's poetry is grounded in personal experiences. He uses catchy and infectious patterns of sound. He was often humorous and bawdy - but knew how to move an audience or a reader.

Tuwhare's poems were conversations rather than statements. You could hear him speaking directly to a person or a house, or to the rain, the weather.

Throughout his work, Tuwhare has claimed the language of the Bible, the poetry of R.A.K. Mason and the lure of ghost stories shared by his father and a friend in Maori late at night when he struggled growing up. Other poems have love admissions, sexual revelations, political barbs or homage to the land and sea.

All of this reflected his Maori roots.

Small Holes in the Silence: Collected Works finds Tuwhare at his best.

He engages the reader. These poems have not lost their resonance over time.

This is a beautiful book. 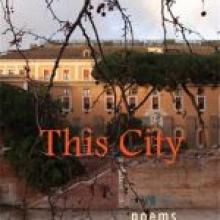 THIS CITY<br><b>Jennifer Compton</b><br><i>Otago University Press</i>
During August and early September 2010, poet Vincent O'Sullivan was reading a heap of poetry manuscripts. He was the judge of the Kathleen Grattan Award for the best unpublished collection of poetry by a New Zealand writer. The winner is published by Otago University Press and wins $16,000. Last year's winner Jennifer Compton launched her new book This City on National Poetry Day.

She has held two recent residencies at Randell Cottage, Wellington, in 2008 and was the Visiting Literary Artist at Massey University last year.

This was where Compton wrote many of her poems in this latest collection.

O'Sullivan said This City is a "complete book of poetry, coherent, gathering its parts to arrive at a cast of mind, a distinctive voice, far more than simply adding one good poem to another." This little collection is dark and exciting. In a little over 40 poems Compton moves quickly around the world. It could be Florence or Palmerston North, but these poems rattle and zoom like buried treasure from some old pirate story. There is nothing soft or shy about the verse she produces.

Even when Compton inherits a dead woman's button box in Australia she still manages to find some on the streets in New Zealand.

I find buttons on the street
she finds playing cards
if she won't pick one up
the wind blows it to
the next bus stop.
Soon she will have a full pack.

A reader does not really need a trip down an endless middle road when they read poetry. This is dark and uncompromising. These poems sound both heavy and smart.

This City is a neat chance to explore poems with spunk that are both assured and cohesive. Compton avoids sappy moments and cloying images.

Among some sassy and comic asides, Compton is simply a New Zealand woman who has travelled the world. This City is viscerally engaging and lyrically lethal. 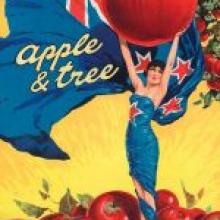 It is a fresh, contemporary little book. One of her poems was runner-up in the open division of Britain's prestigious Hippocrates Prize for Poetry and Medicine. This competition attracts 1500 entries from 23 countries. From "Radiologist's Report":

Lytic inkblots stick to the spine, ribs and arm,
connect the crude metastatic plot that will
craze her body.
Dot to dot, ugly indelible pebbles lodge
between vertebrae.
Fatal rune-stones wait to be read in the
sternum,
squat like filthy fat full-stops in the gap of the
glenoid,
threatening the slow craquelure final
that will shatter through all of you.

These are promising poems, even when some poems are loaded with medical jargon. Her poem "Dedication Page", which passes on her love to her husband, David, is excellent. Apple & tree is an opportunity to explore a new, successful voice.

A new book of poems can be a bit like a blind date: lots of nervous silence. With Apple & tree this rendezvous works out surprisingly well for both reader and writer. There are no regrets in the morning.

A CD of Emeney and Kevin Ireland reading the poems accompanies this book.