This week: Hamesh Wyatt with a roundup of recently published poetry 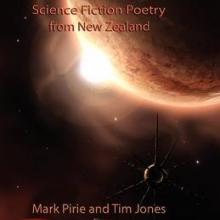 Science fiction is being talked about everywhere.

David Tennant is hanging up his sonic screwdriver in Doctor Who; Star Trek, the movie from last year, made a lot of people happy; The Day of the Triffids, the mini-series, has just finished on our TV screens. Science fiction is alive and well in our literature, too.

Aliens, space travel, time travel and the end of the world have all been brought together in a New Zealand anthology of poetry.

Editors Mark Pirie and Tim Jones have gathered more than 50 poets in Voyagers.

They have created their own Big Bang theory.

This book is entertaining and challenging.

Like the best science fiction, we find out more about ourselves than some far-fetched idea. In John Dolan's memorable "The Siege of Dunedin":

Every
Random horror makes Dunedin
More beautiful the black djinns of smoke
Rising from what was once Barnetts,
Hit last week, still burning. . .

Voyagers is one of those anthologies of poetry that makes you want to curl up with a toddy, more than a ray gun. 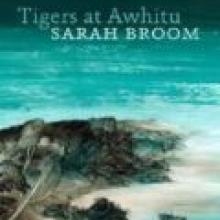 A long way from tripping around the universe is Sarah Broom's debut collection of poems, Tigers at Awhitu. She was one of the many contributors in Emma Neale's excellent anthology Swings and Roundabouts: Poems on Parenthood (Godwit, 2008).

Broom continues to focus on children in this dynamic little book. She also has lots of dreams, ways of seeing things and images of the sea in her poems.

These illustrate how she has been touched with the spirit.

She is nimble and clear in her verse. Things click for her.

Best of all, Broom makes the reader not only react, but also feel.

In "Everest" a frozen man sits, sees and remembers.

Broom tells the story of Esau and Jacob from the Book of Genesis in "Twins".

This is a brilliant first collection from a young woman born here in Dunedin, now living in Auckland.

Another debut collection, from Louise Wallace.

Wallace lives in Wellington but grew up in Gisborne.

She reproduces many childhood recollections in these 42 new poems.

She remembers trips with her family.

Her poems never arrive at a place to rest.

This is chilled-out stuff and at the same time an enthralling read.

It just seems to work.

Poems drift from being relaxed to self-conscious and back without making a noticeable transition.

A reader will enjoy settling in for this first little ride with Wallace.

Vana Manasiadis is another new, young, intelligent woman on our literary scene.

She was born in Wellington and taught classics, drama and English.

Her Greek heritage can be found in this first collection Ithaca Island Bay Leaves: a mythistorima.

Icarus crashes in a Wellington storm, Theseus is a Doc ranger, and she has an interview with Manasseh: Manasiadis easily mixes the ancient with contemporary images.

This is clever stuff that takes the reader in unexpected directions. "Metamorphic Paris":

Every Sunday, after lists of Old Testament names like Manasseh,
Father Karpos would say a few words about Paris and his latest
life as the priest at St Michaels Orthodox Church in South
Dunedin

This is a loose, louche, funny little book.

Manasiadis knows how to craft a poem.

However, in saying all this, Ithaca Island Bay Leaves feels like a clearing house for so many random ideas.

It is fascinating, but I wonder where she will take us next.

John Knight has been around for many years.

His verse and haiku have been published widely in Australia and overseas.

He has suffered from severe depression and his Letters from the Asylum give witness to this.

The death of his mother, the loss of a brother-in-law, an ex-wife's continued ill-health, a failed marriage and loss of faith in religion shapes these poems.

He talks of "light stinks in the dark" in "the people you leave behind".

Letters from the Asylum finds Knight at the hospice, burning old letters and discovering "how misery finds comfort in its chafe". "Still life":

Meat ants
crawled under his eyelids, a family of
mice made their nest in his swag, the fat
grubs of slow buzzing flies ate his guts,
and white ants built a nest in his head.

Knight seems to enjoy taunting and baiting the reader.

He certainly does not ignore the elephant in the room: where life has gone horribly wrong he lays it bare for all to see.

He is a master of vaudevillian humour, but his brutally raw emotion and inscrutable expression can get a bit too much.

It was a classy book, full of poems, notes and photos that brought about a successful debut.

It had a lightness to it.

The poems shone with goodness and a real connection with the reader.

I hoped Leibrich's third book Shadow Friend would offer a similar brand of cheese - not to be.

Gone is the classy production and too many of these poems are weak.

The best word to describe Shadow Friend is beige: it's not awful or offensive, just unoriginal and dull. "Throwing a Shiraz":

Maybe I needed
to see red rain.
Maybe you needed
this wineshed of emotion.
Words had whimpered
and scuttled out of the room.
Reason had crawled,
like a bug, round the floor . . .

Slow, woozy poems add up to a tiny book that is too sedate for its own good. This is Leibrich's most rigid and calculated book.

The Paper Road had energy and appeal. This falls short.