Jim Sullivan reviews a worthy addition to the WW1 library. 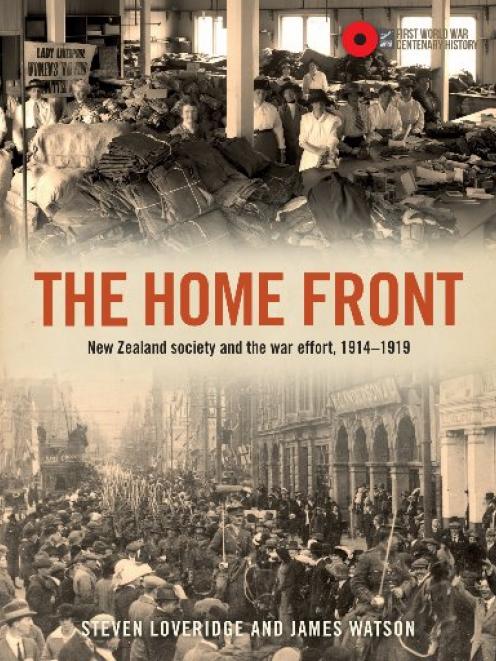 The centennial of World War 1 has unleashed a procession of substantial and well-produced histories and this book’s subtitle, ‘‘New Zealand society and the war effort, 1914-1919’’ confirms that the military stories have now given way to an examination of how the folks at home fared while the battles were being fought 19,000km away.

To cover the same subject for WW2 in 1986, Nancy Taylor’s The Home Front needed two volumes totalling 1300 pages and Steven Loveridge and James Watson with just 500 pages may have wished for more at times.

Instead, they have compromised by providing a succinct treatment of similar topics and, although the bibliography is brief, the copious footnotes confirm that historians of recent times have delved in detail into the effects of the Great War on New Zealand society. The journal articles and books consulted confirm that war history has moved from a focus on the trenches and strategy to providing more information about ‘‘ordinary people’’.

We learn of the efforts to stabilise price, the household disruption caused by the wheat shortage and the make-do efforts to replace hundreds of imported items no longer available. Patriotism was paramount and that women’s corsets were made entirely of French and Belgian ingredients becomes a marketing tool.

That Dunedin’s Dresden piano company became the Bristol and that multi-generation businesses with German-sounding names were vandalised illustrates the depth of feeling of families who were losing sons and brothers to the Hun.

Thus, New Zealand’s first experience of propaganda, especially that which portrayed the enemy as sub-human, forms an important part of the narrative. The Shotover River’s Edith Cavell Bridge was not so named without a good reason. It was a war brought to us by newspapers and the need to censor news when the papers wanted immediate first-hand and accurate information provided lessons for officialdom which led to less confusing controls during WW2.

The treatment of aliens and conscientious objectors, well-covered in previous histories, is perhaps allotted more space here than the topic needs and room to explore in more depth the operations of the various military service boards, especially when married men with families were being called up, would have been welcome.

Domestic politics during an election-less five years and the need to accommodate the needs of rivals Bill Massey and Joseph Ward are well described, even to the extent of how and who should send the dreaded casualty telegrams.

The Home Front uses relatively few illustrations but they are superbly reproduced. But it is the clarity and orderliness of the text which makes the book a ready reference to what is an extremely broad subject. The footnotes will direct you to more detailed information and the basically-chronological structure takes you easily through five traumatic years. Our first experience of total war was a mixed one and The Home Front depiction of it all is a fine addition to the WW1 library.

WW2 as well had histories of new Zealanders sheltering, or turning in, deserters on furlough.

The wartime decisions that split families.