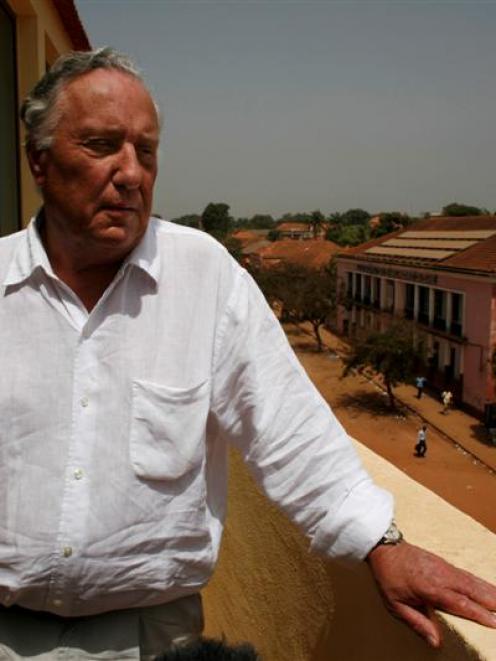 British author Frederick Forsyth, 70, speaks to journalists on a hotel balcony overlooking central Bissau, Guinea-Bissau. Photo by AP.
It could have been a scene right out of one of his own thrillers. And when his next novel is published, it may very well be.

Hours before he touched down in the West African nation, a bomb hidden under a staircase blew apart the armed forces chief. Hours later the president was gunned down, and according to Forsyth, hacked to pieces.

The double assassination of President Joao Bernardo "Nino" Vieira and his military rival, General Batiste Tagme na Waie, shocked Guinea-Bissau and clouded this sweaty equatorial capital in the kind of mystery and intrigue often detailed in Forsyth's own fiction about assassins, spies and coups.

Forsyth's presence here inevitably raised the association with his hit novel, The Dogs of War, about mercenaries trying to stage a coup in a mineral-rich, African backwater.

"I didn't come for a coup d'etat or regime change, but that's what I ran into," Forsyth said over coffee at his hotel, where The Associated Press found him.

He said he couldn't sleep and was in his hotel bed reading when he heard a boom before dawn on Monday and thought, "that wasn't a car door slamming".

The explosion was blocks away at Vieira's modest downtown villa - the beginning of the president's end.

Forsyth went out that day and saw army troops patrolling the streets. They left him alone.

That night, he had dinner with the Dutch pathologist who autopsied Vieira and had spent the morning "trying to put the president back together again".

According to Forsyth's sources, the 71-year-old ruler survived an initial rocket attack, got up, was shot four times, then was "slung into the back of a pickup truck ... and cut to pieces with machetes" by soldiers bent on avenging their own chief's death.

Forsyth said he came here for "the flavour, the odour, of a pretty washed up, impoverished, failed West African mangrove swamp."

"I thought, what is the most disastrous part of West Africa, and by a mile, it's Guinea-Bissau," he said.

"If you drive around you'll see why: one wrecked building after another, one mountain of garbage after another. A navy with no ships, an air force with no airplanes. No infrastructure, no electricity. Everything is purchasable."

Forsyth was a Royal Air Force pilot in the late 1950s, then spent 12 years as a foreign correspondent for the Reuters news agency and the BBC.

His first attempt at fiction, The Day of the Jackal, was about a plot to assassinate President Charles de Gaulle of France. Published in 1971, it was an international best-seller.

In 1974 came The Dogs of War, set in the fictional nation of Zangoro, which he said was modeled after the oil-rich Central African dictatorship of Equatorial Guinea, some 1700 miles southeast of Guinea-Bissau.

Forsyth's next novel, which he expects to publish next year, will be set in Guinea-Bissau.

He said he has stopped inventing fictional places "because the world is so weird and so scary, you might as well use the real ones."

Forsyth was long rumoured to have financed a 1973 attempted coup in Equatorial Guinea. But he dismissed the claims as "imaginary fantasies" spurred by people who saw him interviewing mercenaries for The Dogs of War around the same time.

Dressed in khaki pants and a loose white shirt, the sprightly, 70-year-old author said he always works the same way: story idea, then research, travel and interviews with people who have experienced the things he wants to write about.

He spent much of his three days in Bissau talking with expatriates, who he said can speak more freely than government officials and see the nation's history "from an outsider's point of view." At 10 pages a day, he figures it will take him October and November to write the novel.

It will be another "international thriller involving the usual mix of forces of law and order, criminality, special forces, US Green Berets, a coup d'etat, and a lot of money," Forsyth said.

"But there will be surprises. It's not going to be what you just read about in the news."

Asked if he misses the life of a foreign correspondent, Forsyth said: "Investigative journalism is like a drug. When you write, it's very hard to walk way."

"If push comes to shove I could still cover a story. But in Guinea-Bissau, there is no need to exaggerate," he said.

"This place is for real."