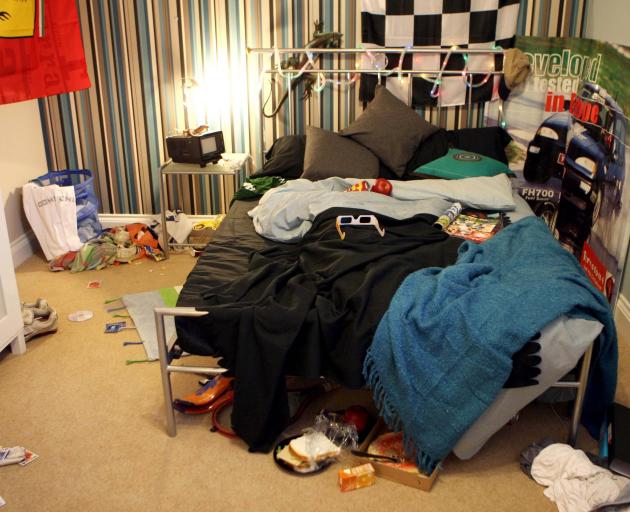 Photo: Getty Images
Dunedin writer Kath Beattie lets her imagination run riot in this fun-filled children’s tale about cleaning your room and who should do it. Read it aloud or, even better, get your children to read it to you, so it becomes a bit of backdoor learning.

The two girls are at college. Their weekend job is to clean and tidy the family home from top to bottom.

"They’ve messed up my room again," he complains to his mother. "I can’t find anything."

"That’s because we’ve tidied and put your things in the right places," Briar says.

"Yes!" says Susie. "Your socks are in your sock drawer and your homework’s on the desk."

"I do my homework on the floor," Nathan says. "And some of the socks you put in the drawer should be in the wash."

Susie screams "Yuk! You’re a pig. You should put them in the laundry?"

"And as for your dirty underwear! I need to have a shower after I pick them up."

"Cool it kids!" mother says. "Perhaps Nathan should tidy his own room."

The next week Nathan does tidy his own room. Briar inspects it.

"It’s a pigsty!" she screams. "I tripped over bike parts and skates piled on the mat, found a towel under the bed and there was nothing hanging in the cupboard. It was all in a heap on the chair."

"Worse than that," says Susie pinching her nose as if there is a real bad smell somewhere, "I found a half eaten burger on the dresser and I bet he didn’t make his bed all week."

"Cool it kids," mother says. "Leave Nathan to tidy his own room."

NO ADMITTANCE TO GIRLS... (especially my sisters)

He tapes the poster to his bedroom door.

"Now I can be myself and live however I like," Nathan says.

Nathan tapes six posters of the Bronco Break Dancers to his ceiling. He lies on the floor, turns up Spotify and gazes up. The group seem to whirl above his head. Next he tapes a skeleton to the back of his door. Its eyes light up in the dark, and when the door opens the plastic bones rattle.

"That will scare those girls away," Nathan thinks.

He hangs spiders from the fan and Lord of the Rings masks from the curtain rail.

He shoves his school clothes to the corner of the cupboard and hangs his astronaut suit on the front. He kicks shoes under the bed and piles motor racing books on the desk. He tosses his other books in the waste-paper basket. On and on he goes until two hours later he has everything where he wants it. He also wonders if he could keep a pet rat in the room without his mother knowing.

Nathan calls to his mother, "Come and see my crash-hot room."

His sisters come running too.

"Can’t you read?" he yells at them and points to the notice.

Susie reads aloud ... "NO ADMITTANCE TO GIRLS! Especially my sisters."

"I’ll be able to find everything now," Nathan says. "I know exactly where everything is."

"Where are your under shorts?" Susie yells.

"In my bed!" Nathan yells back.

"Where are your school shirts?" Briar calls.

Nathan looks frantically about. He’s not sure where they are. "In my room," he calls back.

"Haha! He doesn’t know where they are," he hears them whisper. "He won’t be able to find a thing. Poor dumb creature that he is. Haha!"

Nathan waits until his sisters leave for college. Then he goes to their room.

When Briar and Susie come home, they scream and yell.

"That Nathan’s been in our room," they complain to their mother.

"He’s been messing things up!"

"Reading our diaries, most likely."

"Let’s have a family meeting," their mother says. "Come Nathan! We need to talk about this."

"He shouldn’t come in our room!" the girls say.

"They shouldn’t come in mine!" Nathan says.

"You’re all correct," their mother says. "From now can we agree to all look after our own rooms."

Nathan still gets himself into awesome messes, especially the day he forgot about the chicken and ham pizza and found it squashed under his pillow.

But he has to clean and tidy it up; he has to find his own things.

And he likes it that way best.