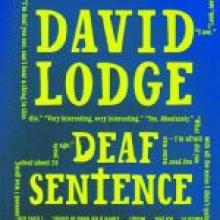 A hugely entertaining and often deeply emotional account of a deaf man's journey from normality to a kind of insanity.

David Lodge has been described as having the ability to attract a curious but mostly non-academic audience into the inner world of the academic elite, resulting in fame and recognition throughout the English-speaking world.

His latest novel, which reads like a memoir, will add to that fame, but perhaps in a perverse fashion.

For it concerns Desmond, a retired head of department linguistics professor who, because of deafness, now fills his time being a sort of adjunct to Winifred, nicknamed Fred, his second and younger wife.

Fred has bloomed personally and professionally since she opened a furnishing store, leaving Des to do the shopping - his deaf sentence.

Lodge, in real life a former university professor who developed a hearing problem, has created a multi-layered character embedded in a social environment from which, because of his disability, he feels increasingly alienated.

Hopefully, readers will find these passages interesting, but for those who do not, Deaf Sentence still has lots to offer.

The relationships between extended family members get a regular airing, as do Des' Roman Catholic working-class roots.

His late wife Maisie was not top drawer.

Neither is his 89-year-old father, who made a living playing in a dance band, but who now lives in squalor in the old family semi.

Further complications arise in the form of a 27-year-old mature student from America, who wants to lure Des out of retirement to oversee her thesis; and to smack her bottom be he so inclined.

No wonder I was glued to the page.

As Lodge, I mean Des, tells it, blindness is tragic but deafness comic.

The blind, with their seeing-eye dogs, elicit immediate sympathy.

No wonder even the well-mannered Fred loses her sang-froid now and then.

All in all, Deaf Sentence is something of an enigma - a plea for understanding which may fall on deaf ears.

Life is ruled by the need to insert and remove hearing aids, and being sure to carry a supply of fresh batteries in order to be human.

It is a hugely entertaining, subtly funny, and often deeply emotional account of a man's journey from normality to a kind of insanity.

- Ian Williams is a Dunedin writer.