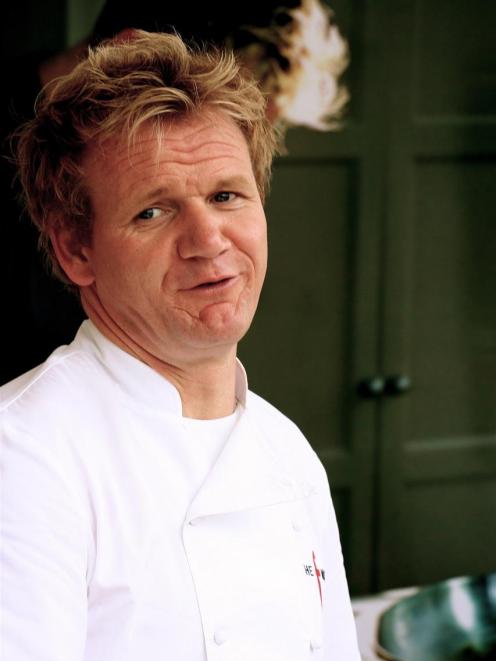 Gordon Ramsay.
Allegations celebrity chef Gordon Ramsay had an affair with a "professional mistress" could threaten to damage more than his marriage.

Tana Ramsay, the star's wife of 12 years, stood by her man as the British press dedicated pages to his alleged seven-year affair with Sarah Symonds, who wrote a book called Having An Affair? A Handbook for the Other Woman.

Ramsay, 42, and Symonds, 38, were photographed less than a week ago at a London hotel, after she was said to have bought three bottles of legal sex drugs.

The claims were made by the tabloid News of the World, and the Ramsays have not commented or denied the allegations.

Friends say Tana, the 33-year-old mother of Ramsay's four children, had become resigned to Ramsay's flirtatious ways and roving eye over the course of their marriage.

"Sometimes Tana just doesn't ask what Gordon is up to even though she is aware about what goes on. She does not question him when she has become suspicious when rumours are flying," an unnamed friend told the Mail Online.

"They have a fulfilling life together, but Tana is no fool. She has her kids, her beautiful house and now her (own) TV career, which, let's face it, is off the back of her husband's fame.

"There is no question that she won't stand by Gordon."

Regardless of whether the alleged affair took place, the fact that Ramsay's public image is built as much on him promoting himself as a family man as it is on his foul-mouthed tirades makes the story prime media fodder.

And it is not just the tabloids tucking in.

The Independent's Life section dedicated five pages, including its cover, to the story on Tuesday.

It pointed out that "the Ramsay Clan" had just featured in a celebration of how the Italians had "made the family meal such an art form" for The Times magazine and another family-centred piece for The Daily Telegraph when the allegations hit.

The Independent asked whether the scandal could destroy Ramsay's £100 ($NZ283.76) million empire, which includes TV, books and an upcoming live Christmas exhibition.

"As long as they're grinning through photo opportunities and presenting a united front then it's business as usual," Herring told The Independent.

He even said the chef could benefit, recalling the case of football star David Beckham, who emerged from a similar scandal unscathed in 2004.

"It made the Beckhams seem more fallible and more real," he said.

While the Ramsays maintained their silence, the chef's mother-in-law on Monday came to his defence.

"Gordon is my son-in-law and a wonderful, sweet man. We hold him in the highest regard. He is a very dear member of our family," Tana's mother Greta Hutcheson, 63, told the Mail Online from her Mayfair home.

Asked of the alleged affair, Hutcheson said: "I don't think anything has happened".

But media reports said Tana's family, including her father Chris - who is Gordon Ramsay's business partner - and brothers Adam and Luke, had held their own crisis talks at a restaurant near their home.

Meanwhile, The Sun reported that Ramsay treated Symonds to a six-course meal at his Maze restaurant in Mayfair after their alleged romp at the London hotel.

Symonds once had an affair with shamed Tory politician Lord Archer but says she no longer indulges in extra-marital relationships.