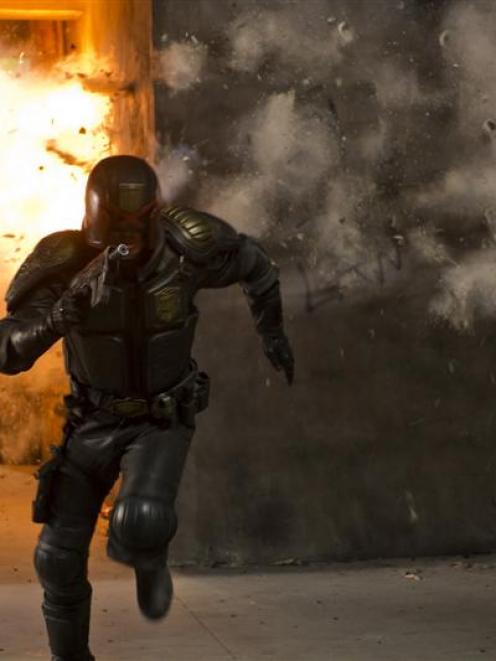 There is a purity to Dredd (Rialto and Hoyts) that might be attractive in principle but can be hard to watch.

Judge Dredd (Karl Urban), a one-man justice department of the future, is never softened with any traditional movie tactics. No flashbacks of his wife and child being killed by evil drug lords. He only speaks when necessary - there are no one-line zingers for us to quote afterwards. His helmet is always on and his visor always down, making him seem more robot than human.

He is a hero who is hard to like. So in case we are tempted to root for the pitiful criminals for whom he is judge, jury and executioner, they are nasty violent scum to the last man or woman.

We are shown the judge on a very bad day. He has to evaluate a rookie, Anderson (Olivia Thirlby) and they end up at the Peach Tree Block, a virtual no-go area.

A new drug, Slo-Mo, is taking over Mega City One and it is controlled from Peach Tree by the Ma-Ma gang, led by the very tough Ma-Ma (Lena Headey). When the judges turn up to investigate a little turf war, Ma-Ma closes the block and declares war.

Trapped in a vast vertical maze they should be sitting ducks but this is Dredd and things get nasty for the Ma-Mas.

Best thing: The future is horrible and this makes it look gritty and real.

Worst thing: The judges dispense instant justice, so lugging a suspect around makes no sense - especially once they know he is guilty.

See it with: A fan of the comics who is still bitter about the travesty of the 1995 Sylvester Stallone film.