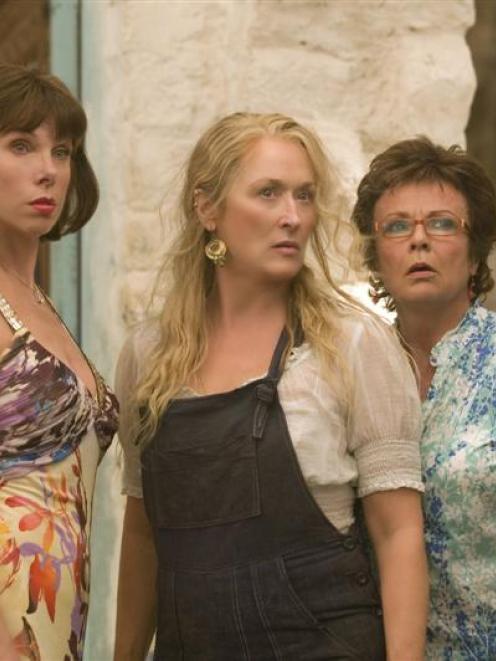 Meryl Streep (centre) and other cast members of Mamma Mia.
Having heard this year described as the unofficial year of the chick flick, ODT film reviewer Christine Powley steps back and takes a wider view.

When you see the Sex and the City movie promoted as if it was a new Batman film you have to agree there is something in the chick flick claim.

However, while Sex and the City made money (a lot of money) it did not have legs. The real success of 2008 year was Mamma Mia, the little musical that could.

This year was a doom and gloom year and not just on the economic front.

Batman got so dark that you needed night vision goggles to see it and every action thriller had to spend time in the Middle East.

No wonder what we really wanted to see was girls just having musical fun.

The highs and lows were:

Mamma Mia: Meryl was a miscasting (when you do the maths she is too old for the character) but they cast around her and she looks so happy jumping around that you have to let the age thing slide and just enjoy some of the corniest songs ever penned being given a new joyously daggy life.

Juno: The indy film pick except that this was an art film that was fun to watch.

You do not expect to leave a movie about teenage pregnancy humming along to the sound track but Juno's daffy charm made it the second cousin to a musical.

Across the Universe: The plot is lacking but when you have Beatles songs and people who know how to sell them you just about cannot go wrong.

Bono singing "I Am the Walrus" has to be one of the great moments but the young cast was up to the material never really needing those celebrity cameos, though they are a nice accessory.

Indiana Jones and the Kingdom of the Crystal Skull: Nobody sings in this but that is about the only thing they left out.

I turned up to gawk at the old guy still thinking he could save the world and ended up having a blast.

This had the likeability factor that was missing from most of years other big action movies.

Enchanted: From the tail end of 2007 but I remember it fondly and surprise, surprise there are musical numbers.

The memory of Amy Adams summoning the rats of New York to do her housework with the aid of a little housework song still makes me smile.

It put Statham on my mental map as a potential future Clint Eastwood but who goes to a Jet Li film to be wowed by the Cockney wide boy?

10,000 B.C.: It shored up Cliff Curtis's bank account but apart from that it had nothing to recommend it.

In fairness, whatever they paid Curtis it was money well spent because he was the only believable thing in it.

21: Jim Sturgess, who was such an excellent Paul McCartney impersonator in Across the Universe, is a total wet blanket in this.

Ripping off casinos is not for nice guys and none of the young actors here cut the mustard. Kevin Spacey dominates as their twisted maths professor.

It would have been more interesting if the movie was about him.

Speed Racer: This looked incredible with its hyper colour palette and zippy car chases but it did not know if it was a cartoon or a real movie and failed to make anyone happy.

If they had thrown out all emotional plot points and chucked in a couple of songs it could have been a winner because, let's face it, the sets and costumes made it look like a musical anyway.

WALL-E: Maybe I over think things but adorable little trash collector WALL-E got up my nose.

I could not see it as a low-key environmental lesson for children, instead I read it as America saying we are so rich we never have to change our behaviour because we can just spend our way out of trouble.

The Dark Knight: I hated this.

In most bad films there is something to laugh about but this Batman was nasty and horrible from top to bottom.

It was blessed with a villain, Heath Ledger's Joker, who wormed into your head and disguised just how shop-worn all that brooding Batman stuff is.

Maggie Gyllenhaal was the one piece of light as Batman's love interest Rachel Dawes. She gave her role intelligence and humanity so they killed her off.

Which says it all really.