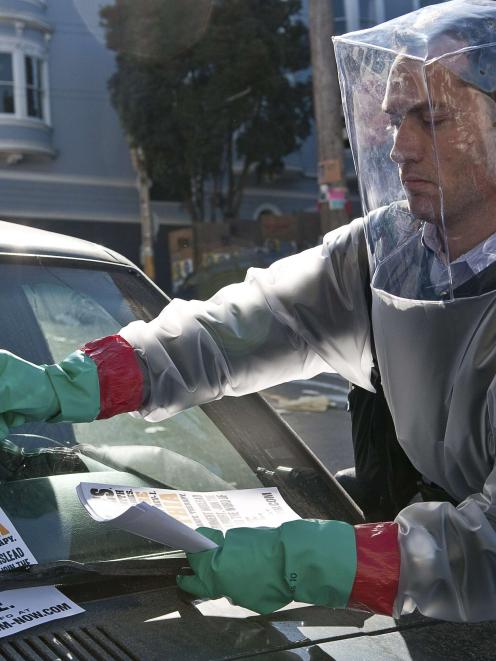 Jude Law in a scene from the film "Contagion". (REUTERS/Claudette Barius/Warner Bros Pictures/Handout)
In "Contagion," the fast, frightening global pandemic drama opening in the US this week, Jude Law is a mad blogger, a web journo whose raging posts against Big Pharm and Big Govt turn incendiary when people start dropping like flies.

Is Law's Alan Krumwiede prophet or paranoiac? A voice of sanity in the chaos and dread, or a nutter?

"I love that it's left open for you to decide," says Law, who clearly had a ball playing this hustling Brit, a giant thorn in the side of health officials trying to stanch the panic, and trying to find a vaccine.

Law is on the phone from his dressing room in London's Donmar Warehouse, where he's been playing Mat, the swaggering Irishman, in a much-praised revival of Eugene O'Neill's "Anna Christie." He's taking a break to talk about deadly viruses and Steven Soderbergh, his "Contagion" director, between the play's matinee and evening performances.

"A lot of the reason I wanted to be a part of this project was because the script was so strong, and obviously a strong script and a brilliant director like Steven, you feel, as an actor, confident that you're almost halfway there," says Law, who dove deep into the blogosphere to research his role.

"I don't want to list anyone in particular," he says, asked to cite a couple of influential bloggers. "I'd rather people see it and draw on their own imagination, but yeah, I certainly looked at an awful lot of blogs, and bloggers who have been interviewed and who have made a bit of a name for themselves, who have become personalities. ... I drew on a few and tried to create someone that seemed to fit that particular persona.

"And yet, what was most exciting was that Steven didn't want to judge him, he didn't want him to necessarily be a bad guy. ... Maybe this guy was correct all along, who knows?"

Crisscrossing the planet, "Contagion" interweaves multiple storylines, beginning with Gwyneth Paltrow's Beth, returning from a Hong Kong business trip and heading home to Minnesota - where she lives with her husband, played by Matt Damon. Law doesn't share any scenes with Damon and Paltrow, but the three have worked together before, most notably on "The Talented Mr. Ripley.'

Others in "Contagion's" sprawling cast include Jennifer Ehle as a Centers for Disease Control scientist, Laurence Fishburne as her boss, Kate Winslet as another CDC doctor, and Demetri Martin, John Hawkes, Monique Gabriela Curnen, Marion Cotillard and Elliott Gould. Law does get a fiery scene or two with the latter, the veteran Hollywood star.

"What a joy that was," he says, laughing. "That was a really happy and exciting couple of days on my part. I made many phone calls back to my mum. 'I'm working with Elliott Gould!' She was over the moon."

Twice nominated for Oscars, Law has been going nonstop these past few years. From "Contagion" he went to work in London and Vienna on "360," Fernando Meirelles' relationship drama, opposite Rachel Weisz, Anthony Hopkins, Ben Foster, and Eminem.

Law did "a very, very small" part in "Hugo," Martin Scorsese's family fantasy. "Anything Marty puts his hands on is going to be exciting. And this being a film for youngsters, and based on a book that I adored by Brian Selznick and in 3-D was just intriguing, so I was pleased to be a part of it."

And then he reteamed with Robert Downey Jr. for another Sherlock Holmes adventure. Law plays Watson to Downey's action-hero sleuth. "Sherlock Holmes: A Game of Shadows" opens on December 16.

"Literally, it felt like there was no gap," Law says about returning to director Guy Ritchie's steampunk take on Arthur Conan Doyle. "We went into it with a little more confidence and swagger. We were very proud of the last one, but when you pick up a canon like that, it's hard to know how the world will respond.

"And (audiences) were really enthusiastic, and appreciative."