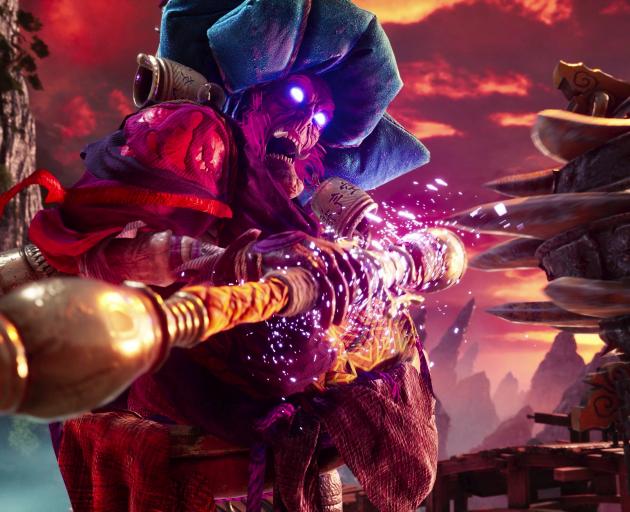 Will you get a deep experience from Shadow Warrior 3? No. Will you get to blast crazy-looking demon guys? Yes. IMAGE: SUPPLIED
SHADOW WARRIOR 3

Big-profile shooters Doom and Wolfenstein have both been revived and updated to a more modern format in recent years, but another, lesser-known series returned over a year before them. Now it’s nine years later and Shadow Warrior has turned out two games in the modern era, one action adventure and one looter-shooter. The newly-arrived third game, following tradition, has abandoned its previous genre for something new.

The game follows wise-cracking protagonist Lo Wang, still spouting unfunny, referential one-liners with every other kill. His humour isn’t as childish or annoying in this instalment, but unless you’re into this kind of thing, you’ll have a deadpan face throughout. The story won’t provoke a lot of excitement either, following a basic ‘‘hero redemption’’ narrative after Lo Wang accidentally destroyed the world (oops) by unleashing a dragon and its yokai hordes. This game isn’t aiming to be about the brilliant story though — it’s about the gameplay, which it at least does well.

The gameplay largely parallels the latest Doom games, with sections of platforming and minor puzzles in between tearing a few enemies apart in an arena where they constantly spawn and you have to deal with them. Killing enemies with your sword will replenish ammo, and using your guns will replenish health. Platforming sections are nothing special and practically run by themselves; it’s mainly double jumps, air dashes, and grappling hooks. If you’ve played a game similar to this in the last five years, you’ll know the feeling.

A recent mechanic of the recent Doom games has been the ‘‘Glory Kill’’, an instant kill on an enemy to spawn more health and ammo pickups. Shadow Warrior3 has put a spin on this mechanic, with the introduction of ‘‘gore tools’’, weapons that have unique effects based on what yokai you use a finishing move on. These include an ice grenade, a sword that allows you to teleport, a gun that launches tracking fireworks, and more. Each enemy has their own unique one, with the more powerful ones costing more ‘‘Finisher’’ meter, incentivising saving that meter for the right tool for the job.

Scattered throughout the levels are upgrade points. There are two types, one for weapons and another for your character. Many of these will be found along the main path, but some require some slight puzzle solving and looking for ledges in the environment, though the game doesn’t make it obvious and you’ll likely miss over half of them easily. In typical fashion, the actually good skills are at the very end of the tree, hiding behind the layer of mediocrity you have to unlock first.

The guns are really well crafted, despite not being original. You have your standard arsenal of pistol, shotgun, grenade launcher and SMGs, with a blade launcher which stuns and a highly damaging sniper to round it off. These guns can be upgraded to give them a bit more uniqueness, like the pistol which can clear waves with one headshot, or the shotgun which no longer requires reloading and runs full auto. The sound design on these is also top-notch — the shotgun again gets a special mention.

Unfortunately, I’ve now described the whole game. Run from one area to another, kill a few enemies and repeat. We’ve seen this a bunch already, and with nothing to really hold someone’s attention, I could see players getting quickly bored with this. After beating the final level, you can’t even replay levels to look for upgrades or destroy easy enemies with the best guns — you have start over from scratch.

The only other thing that’s really worth mentioning about this game is its length. It’s really short — around 5 hours for my first play-through, and another 5 to fully complete all the achievements. Which is fine, but the game is priced at $65 at the moment. It’s just a tad high for my taste for what little content is actually provided.

Despite the lack of content, straightforward nature, and a lack of any real innovation, in this age of long, serious open-world games with large sprawling narratives, a short arena shooter may be just the break from the status quo we need. While it could be way better and cheaper, Shadow Warrior 3’s frenetic gameplay shines through, offering up just enough of a distraction to make the whole enterprise worthwhile.