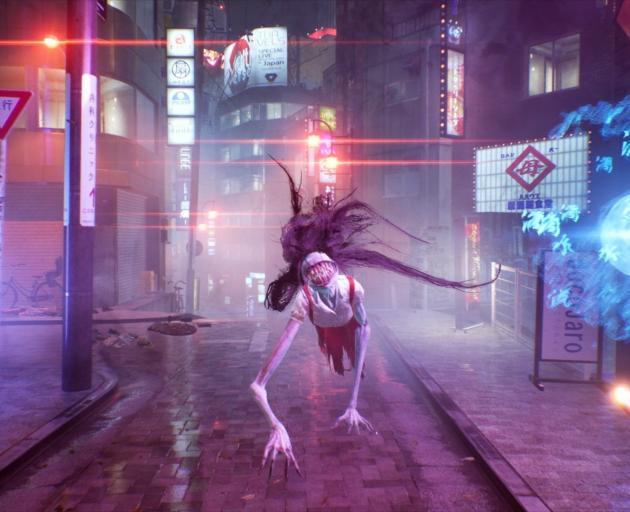 Ghostwire: Tokyo is an intriguing game; a very strongly Japanese-themed game, set in a realistic representation of Tokyo (obviously), but having gameplay elements you might expect to see in Western titles.

You play as Akito, a person fortunate enough to avoid being made into a ghost at the start of the game by the main villain Hannya. Akito avoids this fate by merging with a spirit named KK, albeit reluctantly. By merging with this spirit, Akito is able to harness supernatural powers to fight off the ghost-like enemies that haunt downtown Tokyo.

In a sense, this becomes sort of like a first-person shooter, albeit using Akito’s hand as the weapon. The enemies are very distinctively Japanese; the villain Hannya (who also graces the cover) is lavishly detailed, and the other enemies range from tall men with umbrellas, who more than loosely represent Slenderman, to headless schoolgirls. Each of them is very creepy, and that really mixes well with the game’s overall vibe — it’s sort of a horror game, but it’s more just meant to make you uneasy.

The main crux of the game is exploring Tokyo, saving trapped souls, battling enemies, and collecting various collectables scattered over the map. In combination with a fog that covers the map (that actually hurts you until you reach a gate to ‘‘cleanse the area’’), it really reminded me of earlier Assassin’s Creed games, or the Far Cry titles.

While those games are massively successful, the elements carried over are not exactly the most fun aspects of those games. Nobody’s favourite part of Assassin’s Creed was running over the map, synchronising all the viewpoints. Sure, it wasn’t awful, but it wasn’t a thrill a minute. That is the crux of the problem I think that Ghostwire has.

The combat ends up being all kind of the same (though you unlock powers that are somewhat varied, they have the same end result). The harmful fog is an interesting idea, and one that I suppose pushes you a particular way through the story, but at the expense of the feeling of freedom. It’s just sort of a jack of all trades — where nothing is awful, but nothing is ground-breaking.

In terms of how it looks, it has plenty of visual options for those with displays that can make use of them. In Ray Tracing mode, the game runs at 30FPS, and looks amazing, but the frame rate will likely be a problem for most. The performance RT mode is what I used — I struggled to see the difference fidelity-wise to pure RT, but the frame rate being higher was a notable benefit. If you’ve got the monitor or television that can support these modes, have a play around and see which you like best.

All in all, Ghostwire is the definition of solid but unspectacular. There’s no glaringly awful parts, but equally no outstanding moments that draw you into the world to play marathon sessions.